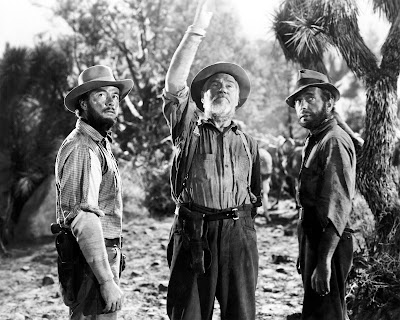 The Treasure of the Sierra Madre (1948), starring Tim Holt, Walter Huston, and Humphrey Bogart is one of the classic movies airing on TCM this week.


This week, TCM is airing great movies from stars like Basil Rathbone, Warner Oland, and Marie Dressler. Plus, they are featuring films from Broadway dramas and musicals. So, without further ado, let's jump right in to this week's offerings. Just a note: the highlighted text has links to full length articles.

Silent Sunday Nights: Umarete Wa Mita Keredo (1932) at midnight. This Japanese family comedy directed by Yasujiro Ozu  is about two young brothers who are embarrassed by their clerk father. The title means, "I was born, but. . ."

This is a great week for . . .:  costume dramas. You've got the lavish spectacle that is Marie Antoinette (1938) on Tuesday morning; the best version of The Importance of Being Earnest on Wednesday prime time; a musical adaptation of a Charles Dickens classic on Friday morning, and three wonderful Jane Austen adaptations on Saturday evening.

Three daytime picks: A birthday tribute to Basil Rathbone who was born Philip St. John Basil Rathbone on June 13, 1892, in Johannesburg. Rathbone was a successful stage actor who moved into films in the 1920's. Rathbone starred in all kinds of movies, but he is best known for his appearances as Sherlock Holmes and for playing villains in swashbucklers and horror films. Rathbone plays a sophisticated European who falls in love with Constance Bennett in Sin Takes a Holiday (1930) at 8:30 a.m. while Rathbone plays Greta Garbo's cold diplomat husband in Anna Karenina (1935) at 10 a.m. Rathbone and Justine Chase play a couple of con artists who move in with a rich woman (Aline MacMahon) in Kind Lady (1935) at 1 p.m.
Prime time lineup: TCM will celebrate the career of  star of the month Marie Dressler each Monday in May. This week's selections are her breakthrough performance as a talkative drunk in Anna Christie (1930) at 8 p.m. followed by her supporting part as a wealthy matron in the Norma Shearer-soaper Let Us Be Gay (1930) at 9:45 p.m.
Late night pick: Dressler plays a wealthy woman who becomes a patron to musician Rudy Vallee in his screen debut, The Vagabond Lover (1929) at 1 a.m.

Three daytime picks: The theme is biopics starting with Norma Shearer as the doomed French queen in Marie Antoinette (1938) at 6:30 a.m. Van Heflin plays 17th President, Andrew Johnson (he was the one right after Abraham Lincoln) in the underrated biopic Tennessee Johnson (1942) at 9:30 a.m. Finally, there is Ben Kingsley's acclaimed performance as the iconic Indian leader in Gandhi (1982) at 4:45 p.m.
Prime time lineup: Actress Candice Bergen is June's guest programmer. Her first choice is director John Huston's masterpiece, The Treasure of the Sierra Madre (1948) at 8 p.m. which Bergen calls a "tiny piece of art" about "dusty, grizzled cowboys played by great actors." Next, Bergen chose The Graduate (1967) at 10:15 p.m. as a tribute to her "brilliantly witty" friend, director Mike Nichols.
Late night pick: Bergen chose the French classic The Earrings of Madame de. . . (1954) at 12:15 a.m. for its striking cinematography.

Three daytime picks: Movies about photographers including lovelorn newsreel photographer Buster Keaton in The Cameraman (1928) at 6 a.m., baby photographer on the lam Bob Hope in My Favorite Brunette (1947) at 7:30 a.m. and ex-con turned newspaper photographer James Cagney in The Picture Snatcher (1933) at 4:30 p.m.
Prime time lineup: Every Wednesday and Thursday in June, TCM is turning the spotlight onto movies that made the journey from the stage to the screen. Tonight's theme is comedies starting with  The Odd Couple (1968) at 8 p.m., a timeless classic from Neil Simon about battling roomies Jack Lemmon and Walter Matthau. Next is The Importance of Being Earnest (1952) at 10 p.m., which is a sparkling adaptation of Irish playwright Oscar Wilde's work about marriage starring Michael Redgrave.

Late Night Pick: James Stewart played the genial Elwood P. Dowd on both stage and screen in Harvey (1950) at midnight.

Three daytime picks: TCM wraps up its spotlight on stage-to-screen comedies with Katharine Hepburn's comeback vehicle, The Philadelphia Story (1940) at 7:45 a.m. Next, TCM celebrates the career of Latina star Lupe Velez with a look at her classic comedy, The Girl From Mexico (1939) at 9:45 a.m. followed by all seven movies in Velez's popular Mexican Spitfire series starting at 11 a.m.
Primetime lineup: TCM continues its spotlight on stage to screen with Broadway musicals. Gypsy (1962) at 8 p.m. featuring Rosalind Russell's performance as the indomitable Mama Rose while Funny Girl (1968) at 10:30 p.m. made Barbra Streisand a star as comedienne Fanny Brice.
Late Night Pick: Zero Mostel and Phil Silvers bring laughs to ancient Rome in A Funny Thing Happened on the Way to the Forum (1966) at 1:15 a.m.

Three daytime picks:  The Broadway musicals continue with the Dickens' classic Oliver! (1968) at 6:15 a.m. followed by films starring Warner Oland. Although he was Swedish, Oland often played Asian characters in movies like Old San Fransicso (1927) at 11 a.m. a silent drama about Frisco's Tenderloin District co-starring Dolores Costello and Anna May Wong. Before Dawn (1933) at 5:30 p.m. is a fun whodunit that finds Oland, as an Austrian doctor, in competition with several other people for some stolen loot.
Prime time lineup: TCM is airing 17 of writer-director Billy Wilder's best movies each Friday in June. This week's selections are his two films with Audrey Hepburn: Sabrina (1954) at 8 p.m. and Love in the Afternoon (1957) at 10 p.m.
Late night pick: Wilder and Charles Brackett wrote the script for the screwball comedy Ball of Fire (1942) at 2:30 a.m.

The Sunday Night Feature celebrates Father's Day with two classic comedies. William Powell plays the frustrated patriarch of a 19th century New York City family in Life With Father (1947) at 8 p.m. followed by Spencer Tracy as an exasperated dad who is marrying off his beloved daughter (Elizabeth Taylor) in Father of the Bride (1950) at 10 p.m.