1001 Classic Movies: The Bride of Frankenstein 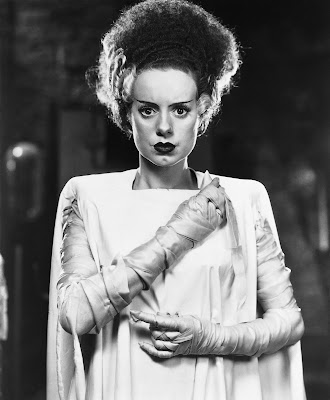 The Bride of Frankenstein (1935), starring Elsa Lanchester, is one of the 1001 classic movies you should see.

Each Monday, I'm going to recommend a classic movie you should see (for the reasons behind the 1001 series and reviews of earlier films covered go here). June is the traditional month for weddings so throughout the month I'll write about four diverse movies with "bride" in the title. This week's selection is the classic horror film, The Bride of Frankenstein (1935).

The Bride of Frankenstein begins as Dr. Henry Frankenstein (Colin Clive) is ready to give up his scientific experiments at the urging of his new wife, Elizabeth (Valerie Hobson), although his original monster (Boris Karloff, billed here simply as KARLOFF) is still alive and well and roaming the countryside. After the monster kidnaps Elizabeth at the behest of the bizarre Dr. Pretorius (Ernest Thesiger), Henry agrees to return to the dungeon of his castle and create a mate for the lonely monster. 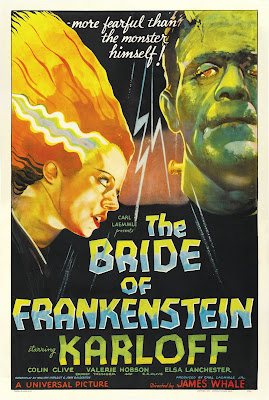 Although Frankenstein (1931) was a blockbuster, most of those involved in the first film weren't very keen about a sequel. Both Universal Pictures chief Carl Laemmle and director James Whale wanted to make more prestigious pictures, and star Boris Karloff wasn't eager to return to the monster's cumbersome costume and makeup (Karloff, who was unable to even set down while made up as the monster, had severely injured his back during the first movie). However, Laemmle's son, producer Carl Laemmle, Jr., eventually persuaded the cast and crew to return for a sequel that was based on a subplot in Mary Wollstonecraft Shelley's novel. The result was another huge hit that is one of the best Universal monsters' movies.

There are actually two brides in The Bride of Frankenstein. The first is Henry's wife, Elizabeth, who persuades him, at least for a time, to give up the attempt to create human life (she spouts pious, production code approved homilies about the sacredness of human life and the dangers of playing God). The second is the monster's mate, played by Elsa Lanchester in an iconic performance (Lanchester also played Shelley in the movie's prologue). Although Lanchester only appears for a few moments in the movie, her jerky movements and hissing sounds, not to mention that amazing hairdo, make her absolutely unforgettable.


The Bride of Frankenstein Viewer's Guide: This horror masterpiece has both camp humor and heartrending pathos. Here's what to look for when you watch:
1. Karloff. Karloff is one of old Hollywood's horror icons, but he was also a great actor. There's a lot of overacting in The Bride of Frankenstein, but Karloff gives a beautifully modulated performance that is among the best in thirties cinema. The monster becomes the focal point for the audience's sympathy, and when he says, "We belong dead," near the end of the film, it is a heartrending moment.
2. Thesiger. Thesiger, who played the bizarre Dr. Pretorius, was a noted British stage actor who was a friend and mentor to Whale. You have to wonder exactly what thirties audiences made of Thesiger's campy performance, but he adds a lot of interesting undertones to the film, especially in Pretorius' relationship with Henry.
3. Cinematography. The Bride of Frankenstein had a big budget for a Universal horror picture, and Whale took advantage of it by creating large elaborate sets that were beautifully photographed by cinematographer John Mescall. Mescall used a technique he called Rembrandt lighting that rendered the dark shadows and night time gloom that moviegoers associate with the horror genre.
4. Score. Franz Waxman's groundbreaking score created leitmotifs, or theme music, for several of the characters. The monster has a harsh dissonant leitmotif based on Karloff's growls while the bride has a trilling leitmotif that echoes a bridal march.

Other critics: The Bride of Frankenstein has a 100 percent fresh rating at Rotten Tomatoes, and Leonard Maltin calls it an "eye-filling sequel to Frankenstein . . . with [a] rich vein of dry humor running through the chills" in a four star review for his Classic Movie Guide. Critics in 1935 generally enjoyed The Bride of Frankenstein, but many qualified their praise by noting that it was a horror film like The New York-World Telegram, which called it, "good entertainment of its kind." However, Time magazine gave the movie an unqualified rave, writing that the film has "a vitality that makes their efforts fully the equal of the original picture ... screenwriters [William] Hurlbut and [John] Balderston and director James Whale have given it the macabre intensity proper to all good horror pieces, but have substituted a queer kind of mechanistic pathos for the sheer evil that was Frankenstein."

The bottom line: The Bride of Frankenstein is the best film of Universal's thirties horror cycle, and it hasn't aged a day in the 81 years since the movie's release. Watch it for the special effects and Lanchester and Thesiger's camp classic performances, but be warned: Karloff's monster will break your heart.

Availability: The Bride of Frankenstein will air at 9:30 p.m. Aug. 26 on TCM. It is also available on DVD, Blu ray and video on demand.

Next Monday, I'll wrap up the brides theme with a look at the Cary Grant comedy, I Was a Male War Bride (1949).