Star of the Month: Robert Ryan 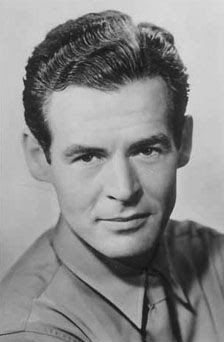 TCM's May star of the month is the rugged Robert Ryan.


TCM is honoring Robert Ryan with 39 movie airing each Friday in May.  Here's what you need to know about one of old Hollywood's most reliable leading men. FYI: TCM sometimes changes the air times and /or movies, so you can go to www.tcm.com to check the updated schedule.

Brief bio: Ryan grew up in a wealthy family that owned a Chicago real-estate firm. Ryan graduated from Dartmouth college in 1932, and he worked a variety of odd jobs, including as an actor, while pursuing his ambitions to become a playwright. Ryan served as a drill instructor in the Marine Corps during World War II and after the conflict he found that he had a much better chance of making a living as an actor than a writer. Ryan landed his breakthrough role as an antisemitic killer in Crossfire, which was based on a novel by his Marine buddy Richard Brooks. Ryan received his only Oscar nomination for this role, and it also proved to be a breakthrough for his career. Ryan became a sought-after actor in film noir (The Set-Up, Woman on the Beach), Westerns (The Naked Spur), and World War II dramas (The Longest Day, The Battle of the Bulge). During the 1960's, Ryan took on diverse roles like John the Baptist in the Biblical epic King of Kings (1961) and the brutal villain in the seafaring drama Billy Budd (1962). Ryan died of lung cancer shortly before his last film, The Iceman Cometh (1973), was released to great acclaim.

Fun Fact: Ryan was a talented amateur boxer who won heavyweight championships at Dartmouth and during his stint in the Marines.


My Star of the Month Top Four:
My picks are two searing dramas, a classic Western, and an account of the D-Day invasion.

Week 1.  Crossfire, airing at 9:30 p.m.: Ryan's role as an antisemitic former Marine who may have killed a Jewish man, earned him an Oscar nomination and put him into the first ranks of old Hollywood's leading men.
Week 2. Billy Budd, airing at 8 p.m.: Peter Ustinov acts and directs in this adaptation of Herman Melville's classic seafaring tale, which features Ryan as an evil master-at-arms.
Week 3. The Naked Spur (1953), airing at 6:15 p.m.: Ryan is brilliant as a wily murderer who is trying to outwit bounty hunter James Stewart in director Anthony Mann's gripping psychological Western.
Week 4.  The Longest Day (1962), airing at 11 p.m.: This all-star recreation of the Allied invasion of Normandy features Ryan as the assistant commander of the 82nd Airborne division.

Fan Magazine Flashback: A vintage ad for House of Bamboo (1955). 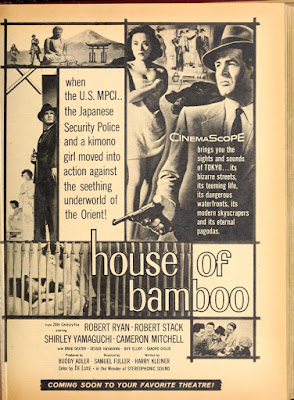