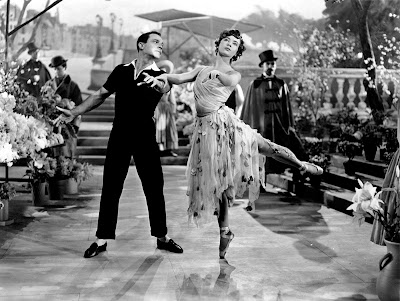 Today, I'm celebrating dance in film with a look at old Hollywood ballet sequences like this one from An American in Paris (1951), featuring Gene Kelly and Leslie Caron.

This article is part of Gotta Dance! A Celebration of Dance in Film hosted by Classic Reel Girl.

Old Hollywood films have always celebrated dance from the unrivaled elegance of Fred Astaire and Ginger Rogers to the flying feet of tap-dancing queen Ann Miller. Today, I'm looking at ballet sequences in American films. I'll outline a little bit of the history behind this unique phenomenon and share clips from some of my favorite movies and where you can watch the entire movies. 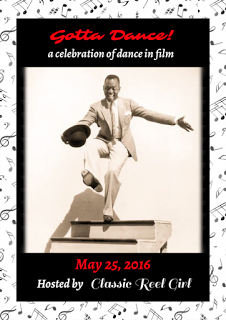 Ballet is a centuries-old art form that experienced a creative resurgence in the early 20th century. Dancers like prima ballerina Anna Pavlova appeared in early films, and the ballet was always a popular milieu for movies from Garbo's aloof ballerina in Grand Hotel (1932) to both the 1931 and 1940 versions of the tragic romance, Waterloo Bridge. It took a little longer for ballet sequences to make their way into films, but they slowly crept into movies like the Shirley Temple vehicle, The Little Princess (1939), and Walt Disney's Fantasia (1940).


Slaughter on Tenth Avenue from On Your Toes (1939)


On Your Toes (1939), a jazz ballet about a music teacher (Eddie Albert) who gets mixed up with a Russian ballet company, was choreographed by the legendary George Balanchine and featured German ballerina Vera Zorina as the company's lead dancer. Zorina dances two ballet sequences, including the film's finale, Slaughter on Tenth Avenue. TCM at 11 a.m. June 3.


Ballet gained renewed popularity on film in 1948 when the British film, The Red Shoes, which featured a 15-minute ballet sequence performed by real dancers, became a global hit. This opened up new possibilities for dance in American musicals that Gene Kelly and director Stanley Donen took advantage of in On the Town. This movie featured innovative dance routines from choreographer Jerome Robbins that mimicked the everyday actions of real New Yorkers. Two of Robbins' ballet sequences made it into the finished film, but the best is Miss Turnstiles. TCM at 7:15 a.m. June 3 and 12:30 a.m. July 2. DVD and video on demand.


The early 1950's were old Hollywood's greatest era for musicals, and there are almost as many great ballet sequences as there are great movies (Singin' in the Rain, The Band Wagon). However, the supreme achievement of dance on film from this time period is the 17-minute ballet sequence that ends An American in Paris. Kelly, collaborating with director Vincente Minnelli, creates a visual and sensory experience that is almost unparalleled in American film. TCM at 4 p.m. June 12. DVD, Blu ray, and video on demand.


Michael Kidd's innovative choreography for Seven Brides for Seven Brothers moved the ballet sequence from high art into everyday life. Before that, most movie ballets were either performances a la On Your Toes or dream sequences like An American in Paris. Instead, Kidd incorporated the dances into the frontier clan's daily life. The barn-raising sequence has an unrivaled energy, but I'm fond of this winsome number where the ax strikes keep the beat like a metronome. TCM at 10:30 p.m. July 2. DVD and video on demand.


The 1961 adaptation of West Side Story is perhaps the last great musical in American cinema. Jerome Robbins choreography certainly represents one of the greatest achievements of dance on film, especially the opening sequence, which turns a street fight between two New York City gangs into poetry in motion. TCM at 8 p.m. June 23 and 5:15 p.m. July 4. DVD, Blu ray, and video on demand.

An American in Paris ballet blogathons dance on film On the Town On Your Toes Seven Brides for Seven Brothers. West Side Story