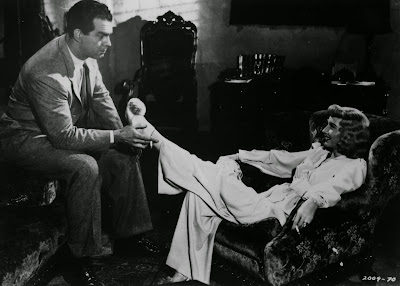 Double Indemnity (1944), starring Fred MacMurray and Barbara Stanwyck, is one of the old Hollywood classics airing on TCM this week.


This week, TCM is airing great movies from stars like Maureen O'Sullivan, Robert Ryan, and Cary Grant.  Plus, they are featuring films about costume designer Jean Louis and mountain men. So, without further ado, let's jump right in to this week's offerings. Just a note: the highlighted text has links to full length articles.

Sunday Prime Time: A double feature of films that were restored by The Museum of Modern Art.

Silent Sunday Nights: Desert Nights (1929) at 12:15 a.m. This action-adventure movie stars John Gilbert as an heroic diamond-mine manager who gets caught up in a desert storm.

This is a great week for . . .: Western fans. There's an evening of mountain men films on Wednesday and some of Robert Ryan's best Westerns on Friday afternoon.

Daytime Theme: Movies from costume designer Jean Louis. He was one of the premier designers in old Hollywood, known for making Marlene Dietrich's stage wear and for designing for his wife Loretta Young. Louis designed for Doris Day in Send Me No Flowers (1964) at 10:15 a.m., Judy Holliday in Born Yesterday (1950) at 4:15 p.m., and Rita Hayworth in The Lady From Shanghai (1948) at 6:15 p.m.
Primetime theme: Movies in the form of short stories. In O. Henry's Full House (1952) at 8 p.m., several directors, including Howard Hawks and Jean Negulesco, collaborated with stars like Marilyn Monroe, Charles Laughton, and Anne Baxter to bring the famous author's works to the silver screen. Four of author W. Somerset Maugham's best short stories are presented in Quartet (1948) at 10:15 p.m.
Late Night Pick:  Vincent Price heads up the cast in the horror anthology Twice-Told Tales (1963) at 12:30 a,m,, which is based on the works of 19th century author Nathaniel Hawthorne.

Daytime Theme: A birthday tribute to Maureen O'Sullivan who was born May 17, 1911, in Boyle, Ireland. She is probably best known today as the mother of actress Mia Farrow, but she began her film career in 1930 when she was cast in a 20th Century Fox movie that was being filmed in Dublin. In 1932, she signed a contract with MGM, where producer Irving Thalberg personally selected her for the pivotal role of Jane Parker in the studio's Tarzan series starring Johnny Weissmuller --Tarzan Escapes (1936) is on at 2:45 p.m. O'Sullivan also played supporting parts in several MGM productions like the Marie Dressler-Wallace Beery comedy, Tugboat Annie (1933) at 9:15 a.m., and in the all-star adaptation of Pride and Prejudice (1940) at 5:45 p.m.
Primetime Lineup: TCM host Robert Osborne's picks. Osborne's selection for May are two World War II dramas starring John Garfield. First up is Air Force (1943) at 8 p.m., which stars Garfield as the rebellious gunner in a bomber crew followed by The Fallen Sparrow (1943) at 10:15 p.m., which features Garfield as a Spanish Civil War veteran who was brutally tortured by the Nazis for information about a priceless keepsake.
Late Night Pick: Bette Davis won her first Academy Award for playing a neurotic alcoholic actress in Dangerous (1935) at midnight.

Daytime Theme: Movies about plastic surgery. This was a surprisingly common subject in old Hollywood films, although most of the people who went under the knife were criminals who were eager to disguise their identities. That's the case in the gangster drama Another Face (1935) at 6 a.m. and in the Humphrey Bogart-Lauren Bacall film noir Dark Passage (1947) at noon. Robert Mitchum has the opposite problem in His Kind of Woman (1951) at 4 p.m. He is a professional gambler who is the target for a complicated identity switch involving a notorious gangster (Raymond Burr) and a wily plastic surgeon (John Mylong).

Primetime Lineup: Movies about mountain men. Robert Redford stars as a 19th century Colorado man who goes into the wild in the survivalist classic Jeremiah Johnson (1972) at 8 p.m. Clark Gable plays an 1830's fur trader in the underrated Western Across the Wide Missouri (1951) at 10:15 p.m., which features beautiful location shooting in the Rocky Mountains.
Late Night Pick: The Last Frontier (1955) at 4 a.m. isn't one of the Anthony Mann-directed Westerns that you hear a lot about, but it is still a gripping film about a trapper (Victor Mature) who takes shelter in a remote Army outpost. 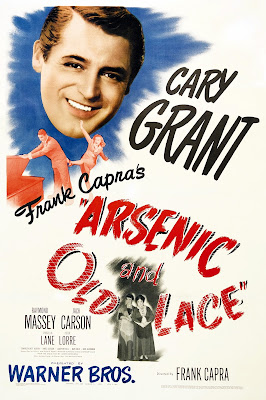 Daytime theme: Movies starring Cary Grant. TCM is featuring some of Grant's best comedies including Bringing Up Baby (1938) at 6 a.m., Once Upon a Honeymoon (1942) at 9:45 a.m. and Arsenic and Old Lace (1944) at 11:45 a.m.
Primetime lineup: TCM will celebrate the legendary B movie company American International Pictures with a spotlight on the company's films every Thursday in May. During the 1960's AIP tapped into the lucrative teen market with beach movies like Beach Party (1963) at 8 p.m. starring Frankie Avalon and Annette Funicello and biker films like Wild Angels (1966) at 10 p.m. starring Peter Fonda and Nancy Sinatra.
Late Night Pick: AIP wasn't above spoofing itself with movies like Dr. Goldfoot and the Bikini Machine (1965) at 5 a.m., which features the talents of AIP regulars Avalon and Vincent Price in a beach-meets-horror movie.

Daytime theme:  TCM's morning lineup is all about films from playwright William Inge, including an adaptation of his Pulitzer Prize winner Picnic (1956) at 11:15  a.m., featuring William Holden and Kim Novak. TCM switches over to star of the month Robert Ryan in the afternoon, featuring two of his best Westerns: Return of the Bad Men (1948) at 3 p.m. and  The Naked Spur (1953) at 6:15 p.m. Ryan is brilliant in the second film as a wily murderer who is trying to outwit bounty hunter James Stewart.
Primetime lineup: TCM continues Ryan's films in prime time with the two of his later films, the backwoods drama, Lolly-Madonna XXX (1973) at 8 p.m. and the crime film The Outfit (1973) at 10 p.m.
Late Night Pick: The best film of Ryan's later career is director Sam Peckinpah's revisionist Western, The Wild Bunch (1969) at midnight.

TCM's prime time lineup is all about insurance scams. The night begins with the greatest insurance fraud movie of all time, Double Indemnity (1944) at 8 p.m., followed by three movies inspired by that classic film noir. Dennis O'Keefe plays an insurance investigator who is on the case of a small-town suicide in Cover-Up (1949) at 10 p.m. followed by The Pitfall (1948) in which insurance agent Dick Powell gets mixed up with femme fatale Lizabeth Scott. Finally, Mark Stevens plays a crooked insurance agent who assigned to investigate his own robbery in Timetable (1956) at 1 a.m.

The Sunday Night Feature is a celebration of films that have been restored by The Museum of Modern Art. First up is the pre-code Western Wild Girl (1949) at 8 p.m., which was beautifully filmed in the California wilderness by director Raoul Walsh. Next is the animated documentary Of Stars and Men (1961) at 9:30 p.m., which is described as an exposition on space, time, and man's place in the universe.