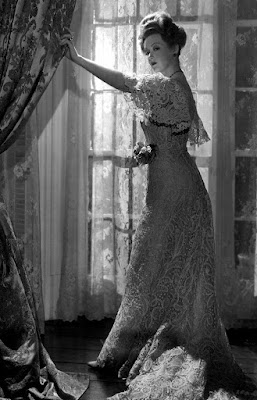 The Little Foxes starring Bette Davis, is one of the 1001 classic movies you should see.

Each Monday, I'm going to recommend a classic movie you should see (for the reasons behind the 1001 series and reviews of earlier films covered go here). Throughout May, I'll celebrate the 75th anniversary of Citizen Kane with a look at that film and three other movies that were nominated for best picture at the 1941 Academy Awards. Today, I'm looking at the family drama, The Little Foxes about the greedy schemes of a trio of Southern siblings. Note: I covered 1941 best picture nominee Suspicion during my Hitchcock series in February. You can check it out here.

The Little Foxes tells the story of Regina Giddens (Bette Davis), a well-to-do woman living in a rural Alabama town in 1900. Even though Regina lives in a fine house and has fancy clothes, she longs to have enough money to leave the South and lead an independent life. Regina and her two brothers (Charles Dingle and Carl Benton Reid) have the chance to earn a fortune by investing in a cotton mill, but their plans require the cooperation -- and more importantly, the money -- of her ailing husband, Horace (Herbert Marshall). When Horace refuses to get involved, the siblings begin scheming behind his back. 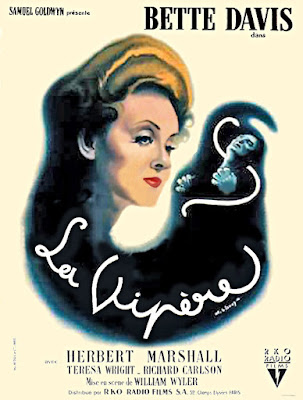 The Little Foxes is an adaptation of Lillian Hellman's 1939 play that was a smash hit on Broadway. Independent producer Samuel Goldwyn quickly snapped up the rights, and brought Hellman and most of the Broadway cast to Hollywood for the screen version. However, Tallulah Bankhead, who played Regina on stage, didn't get to reprise her role because director William Wyler insisted on casting his frequent collaborator Bette Davis in the lead role. The movie was a success at the box office and with the critics.

The Little Foxes was one of 10 films nominated for best picture in 1941, and, although it isn't as innovative as Citizen Kane or The Maltese Falcon, the movie still holds up well today, especially as a commentary on the limited roles of women in early 20th century America. Regina is smarter and more capable than either her brothers or her husband, but her ambitions have been frustrated because she does not have the ability to pursue her own career. In the end, she gets her way through drastic measures, but it is a hollow victory. She is left alone and isolated with only her money to comfort her.


The Little Foxes Viewer's Guide: This movie is a tour de force for both the talents of Hellman and Davis. Here's what to look for when you watch:
1. Play vs. movie. Goldwyn tinkered with the play somewhat, softening the character of Regina's husband and giving Regina's daughter (Teresa Wright) a love interest. The most drastic change was the interpretation of Regina. Bankhead played Regina as a plucky woman who is fighting against the domination of her brothers and husband, while Davis went in the opposite direction. Her Regina is a ruthless villain who is capable of chilling crimes.
2. Makeup. Davis' unusual makeup is one of the most noticeable things about her performance. She worked with makeup artist Perc Westmore to achieve a unique, mask-like look that Wyler compared to a Kabuki performer.
3. Gregg Toland. The cinematographer made this film immediately after Citizen Kane and viewers can easily spot his signature style. There's deep focus photography, mirrors (watch for an impressive scene where two characters are having a discussion while shaving), and Davis retreating into the shadows in the beautifully shot final scene.
4. Heart attack scene. I don't want to give away too much of the plot, but the scene where Herbert Marshall has a heart attack is one of the best single moments in old Hollywood history. The always underrated Marshall and Davis give magnificent performances, and the use of deep focus photography works as a storytelling device and not just as a showy camera technique.

Other critics: The Little Foxes is one of the few films with an 100 percent rating at Rotten Tomatoes, and Leonard Maltin calls it a "an outstanding filmization of Hellman's play . . . headed by a majestic Davis" in a three and one-half star review for his Classic Movie Guide. Critics in 1941 were also unanimous in their praise.  Bosley Crowther of  The New York Times praised the acting while also shrewdly pointing out the movie's amoral elements. "The Little Foxes will not increase your admiration for mankind. It is cold and cynical. But it is a very exciting picture to watch in a comfortably objective way, especially if you enjoy expert stabbing-in-the-back." The Variety critic singled out Herbert Marshall for praise, comparing his character to a dying swan (?) and writing that "Marshall turns in one of his top performances in the exacting portrayal of a suffering, dying man."

The bottom line: The Little Foxes is a perversely enjoyable film about amoral people doing horrible things to each other for the almighty dollar. Watch it for the great performances, especially from Davis and Marshall, and for the riveting final third of the film.

I'll be off next week for Memorial Day, but I'll start the new theme of June Brides with Father of the Bride (1950) on June 6.