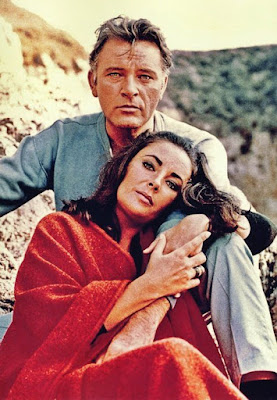 Today, I'm writing about the legendary romance between Elizabeth Taylor and Richard Burton.

This article is part of The Star-Studded Couple Blogathon hosted by Phyllis Loves Classic Movies.

There have been many star-studded couples in old Hollywood history, but none have lived, loved, and made movies quite as spectacularly as Elizabeth Taylor and Richard Burton. The legendary romance between the English actress and the Welsh actor began on the set of Cleopatra (1963) and spanned two marriages, three continents, and several priceless jewels.

There was so much interest in Taylor and Burton that their affair ushered in the age of celebrity journalism, but, even though their romance was conducted under the scrutiny of a thousand paparazzi flashbulbs, they also had a genuine love for each other that transcended their fame. Even so, Taylor and Burton came from two very different backgrounds: she was the a child of privilege, who stated that she couldn't remember a time when she wasn't famous, while Burton battled his way to success from grinding poverty.

Burton was born Richard Jenkins on Nov. 10, 1925, in Pontrhydyfen, Wales as the 12th of 13 children of an impoverished coal miner and his wife. Richard's mother died when he was 2, so he went to live with his older sister and her husband. Richard was always a bright student and a voracious reader, and his exceptional acting ability in school plays brought him to the notice of one of his teacher's, Philip Burton.

Burton became the young man's ward -- as part of this process his last name was legally changed from Jenkins to Burton -- and Richard earned a scholarship to Oxford with Burton's assistance. After a stint in the Royal Air Force during World War II, Burton quickly became one of the most-sought after Shakespearean actors in England. Hollywood soon came calling, and Burton made his American film debut in My Cousin Rachel (1952) co-starring Olivia de Havilland.

Taylor was born Feb. 27, 1932, in London, as the daughter of an upper-class art dealer and his wife. The Taylor's moved to Los Angeles in 1939, and Elizabeth's ambitious mother, Sara, soon made the rounds of the studios with her beautiful daughter. Elizabeth got an MGM contract in 1942, and she quickly moved up the ranks of child stars at the studio in films like Lassie Come Home (1943), Jane Eyre (1943), and National Velvet (1944).

By the time Taylor and Burton made Cleopatra, she was the biggest movie star in the world with a million-dollar salary, and he was a sought after leading man on both stage and screen. They were both married to other people -- Taylor was on her fourth husband, singer Eddie Fisher, while Burton, despite his reputation as a ladies man, was devoted to his wife, Sybil -- but that didn't stop them from embarking on a scandalous affair.

Despite all this bad publicity, or, more likely, because of it, Taylor and Burton were quickly cast together in two more movies: the all-star, The V.I.P's (1963), and the romance, The Sandpiper (1965), whose script was heavily rewritten to take advantage of Le Scandale. Taylor and Burton finally married on March 15, 1964, in a hotel in Montreal. After Burton had a successful Broadway run in Hamlet, the couple embarked on three challenging films: Who's Afraid of Virginia Woolf (1966), which won Taylor a second Academy Award, and  adaptations of Shakespeare's The Taming of the Shrew (1967) and Elizabethan playwright Christopher Marlowe's Doctor Faustus (1967).

These years were the happiest of their marriage, with couple basking in their international celebrity and Burton showering Taylor with jewels like a stunning 33.19 carat diamond and the famous La Peregrina Pearl, which had adorned the likes of the Tudors and the Bonapartes before Burton paid $37,000 for it as a surprise birthday present. Their love, although played out in front of the cameras, was certainly genuine. Burton wrote long mushy passages in his diary about Taylor's beauty, while Taylor later admitted to an interviewer that her last two marriages did not compare with her relationship with Burton. 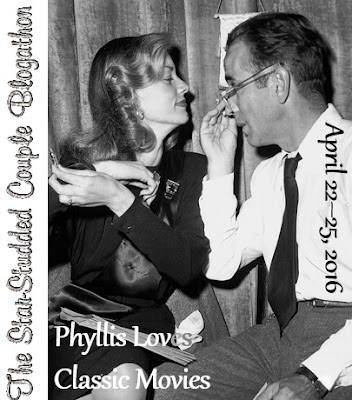 Eventually, Burton and Taylor's box office clout diminished, and the couple struggled with Burton's excessive drinking and his depressive moods. They divorced in 1974, only to remarry on Oct. 10, 1975, in Botswana. That  marriage only lasted six months, and they divorced for the second and final time in 1976, although the couple remained friends and even appeared on Broadway together in 1983 shortly before Burton's death on Aug. 5, 1984, from a brain hemorrhage.