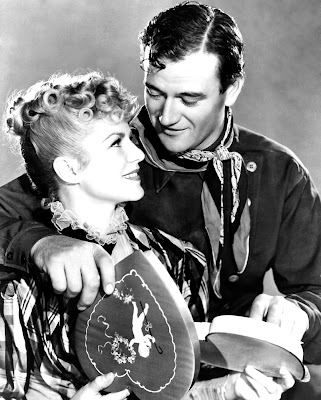 Stagecoach (1939), starring Claire Trevor and John Wayne, is one of the old Hollywood favorites airing on TCM this week.


This week, TCM is airing great movies from stars like Judy Garland, Sophia Loren, and Glenn Ford.  Plus, they are featuring films from director John Ford and German cinema. So, without further ado, let's jump right in to this week's offerings. Just a note: the highlighted text has links to full length articles.

Silent Sunday Nights: The Godless Girl (1929) at midnight. This drama about the romance between a Christian youth leader (Tom Keene) and an atheist (Lina Basquette) was director Cecil B. DeMille's final silent film.

TCM Imports: The minimalist Iranian film, Taste of Cherry (1997) at 2:15 a.m., is about one man's attempt to find someone to bury him after he commits suicide.

This is a great week for . . .: John Wayne fans. Many of his best Westerns are airing on Monday daytime. Plus, The Train Robbers is airing during the Ann-Margret tribute. 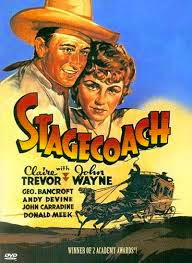 Daytime Theme: Movies from director John Ford. Ford was one of  the great directors in old Hollywood history, especially well-regarded for his Westerns. Ford virtually invented the modern Western in Stagecoach (1939) at 6 a.m., the story of a group of travelers who are trying to reach their destination before an attack from hostile Indians. She Wore a Yellow Ribbon (1949) at 9:45 a.m. features one of John Wayne's best performance as a cavalry officer who must lead one more mission before he retires. The Searchers (1956) at 1 p.m., is Ford's masterpiece, featuring Wayne as a ruthless Indian hunter who is searching for his kidnapped niece (Natalie Wood).
Primetime theme: TCM is featuring movies from the legendary Barrymore acting family. This week's selections are collaborations between the three Barrymore siblings. The trio only appeared in one film together Rasputin and the Empress (1932) at 8 p.m., while one of Lionel and John's best collaborations, Grand Hotel (1932), is airing at 10:15 a.m.
Late Night Pick: Dinner at Eight (1933) at 1:45 a.m. is another great Barrymore brothers movie, with Lionel as a shipping magnate who is hosting a dinner party that is attended by John, who is playing a washed-up silent movie star.

Daytime Theme: A birthday tribute to Edgar Kennedy, who was born April 26, 1890, in Monterey, Calif. Kennedy is a familiar face to most TCM fans for his appearances in around 500 films, mostly as a comic foil to great comedians like Laurel and Hardy, Charlie Chaplin, and the Marx Brothers. The Marx Brothers political satire, Duck Soup (1933) at 9:15 a.m., features Kennedy as an exasperated lemonade-stand owner. In Air Raid Wardens (1943) at 1:45 p.m., Kennedy tries to stop Laurel and Hardy from keeping the peace on the homefront. Kennedy also starred in several shorts. TCM is airing some of the best at 5 p.m.
Primetime Lineup: Movies starring Tuesday Weld. A 13-year-old Weld plays a girl who is desperate to go the prom in Rock, Rock, Rock (1956) at 8 p.m., but the movie's main claim to fame is appearances from rock 'n' roll pioneers like Chuck Berry and disc jockey Alan Freed. Because They're Young (1960) at 9:45 p.m. features Weld as a troubled student who is helped by crusading teacher Dick Clark (yes, that Dick Clark).
Late Night Pick: The Cincinnati Kid (1965) at 5 a.m. is a well-done The Hustler knock-off that stars Weld as the girlfriend of professional poker player (Steve McQueen).

Daytime Theme: Movies starring comic genius Peter Sellers. Sellers stars as  a straight-laced lawyer turned hippie in I Love You, Alice B. Toklas (1968) at 8:30 a.m. followed by a supporting part as a bumbling gangster in the Ealing Street comedy, The Ladykillers (1956) at noon. Finally, Sellers plays the wingman to James Mason's teenage-chasing intellectual in director Stanley Kubrick's adaptation of Vladimir Nabokov's classic novel, Lolita (1961) at 3:15 p.m.

Primetime Lineup: TCM will feature a festival of classic German cinema each Wednesday in April. Tonight's lineup features movies from the great German star Louise Brooks starting with Pandora's Box (1928) at 8 p.m. and Diary of a Lost Girl (1929) at 10:30 p.m. Both films deal with a young girl's loss of innocence in Germany's decadent postwar culture.
Late Night Pick: You can see Greta Garbo's German-language version of Anna Christie (1931) at 5:30 a.m.

Daytime theme: A birthday tribute to Ann-Margret, who turns 75 on Thursday. The Train Robbers (1973) at 2:45 p.m. is a John Wayne Western that co-stars Ann-Margret as a widow who hires the Duke to get back gold stolen by her late husband. Elvis Presley and Ann-Margret steam up the screen in Viva Las Vegas (1964) at 4:30 p.m. followed by Ann-Margret's turn as an impressionable Ohio teenager in the Elvis-inspired muscial, Bye Bye Birdie (1963) at 6 p.m.
Primetime lineup: TCM kicks off the annual TCM Film Festival with an interview from last year's festival between Sophia Loren and her son, Eduardo Ponti at 8 p.m., followed by Marriage -- Italian Style (1964) at 9:45 p.m., which is one of Loren's best collaborations with her frequent co-star Marcello Mastroianni.
Late Night Pick: Arabesque (1966) at 12:45 a.m. is a fun spy thriller that stars Loren as a woman of mystery who gets involved with an university professor played by Gregory Peck.

Daytime theme: Movies about Australia. Peter Finch gives a moving performance in The Shiralee (1957) at 8:15 a.m. as an outback man who is trying to raise his daughter (Dana Wilson) alone. The Sundowners (1960) at 10 a.m. stars Robert Mitchum and Deborah Kerr as a couple who struggle to make ends meet while living a nomadic existence. Picnic at Hanging Rock (1975) at 4 p.m. is director Peter Weir's masterpiece about the mysterious disappearance of a group of 19th century schoolgirls.
Primetime lineup: TCM will spend Friday nights in April celebrating the talents of its star of the month, Judy Garland. A Star is Born (1954) at 8 p.m. is Garland's last great film role as a vaudeville performer turned movie star. The film includes her iconic performance of "The Man That Got Away."
Late Night Pick: Judgment at Nuremberg (1961) at 1:15 a.m. is an all-star recreation of the Nazi war crimes trials that includes an Academy-Award nominated performance from Garland as a German woman who befriends a Jewish man.

TCM's prime time lineup is all about forties actress Ruth Hussey. The night begins with the ghost story The Uninvited (1944) at 8 p.m. followed by the drama, H.M. Pullham, Esq. (1941) at 10 p.m., which features Hussey as the proper wife of a stuffy businessman played by Robert Young. The night winds up with the all-time classic, The Philadelphia Story (1940), which features an Oscar-nominated performance from Hussey as a wisecracking tabloid photographer.

The Sunday Night Feature is a centennial celebration of actor Glenn Ford, who was born May 1, 1916, in Sainte-Christine-d'Auvergne, Quebec. First up is the classic film noir Gilda (1946) at 8 p.m., which stars Ford as a gambler who gets mixed up with the ultimate femme fatale (Rita Hayworth). Next is A Stolen Life (1946) at 10 p.m., which features Ford as an unlucky man who gets involved with a pair of twin sisters, who are both played by Bette Davis.