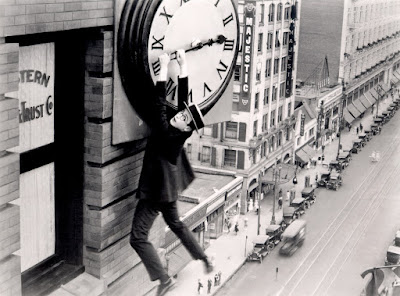 Safety Last! (1923), starring Harold Lloyd, is one of the old Hollywood favorites airing on TCM this week.


This week, TCM is airing great movies from stars like Judy Garland, Jack Lemmon, and Lionel Barrymore.  Plus, they are featuring films about blondes and the Ziegfeld Follies. So, without further ado, let's jump right in to this week's offerings. Just a note: the highlighted text has links to full length articles.

Sunday Prime Time: Two 1968 comedies about blended families: Yours, Mine and Ours and With Six You Get Eggroll.

Silent Sunday Nights: Across to Singapore (1928) at midnight finds sailor brothers Ramon Novarro and Ernest Torrence fighting for the affections of Joan Crawford.

TCM Imports: The experimental Japanese film Woman in the Dunes (1964) at 2 a.m.

This is a great week for . . .: silent movie fans. Across to Singapore is a great chance to see a hard-to-find Crawford silent. Plus, Wednesday has many of Harold Lloyd's best silent movies.

Daytime Theme: Movies produced by Val Lewton. The Russian-American producer made several successful horror movies for RKO pictures in the 1940's. TCM is showing several of these films, starting with I Walked With a Zombie (1943) at 10:45 a.m. followed by Lewton's two most famous movies Cat People (1942) at 5 p.m. and The Curse of the Cat People (1944) at 6:15 p.m.
Primetime theme: TCM is featuring movies from the legendary Barrymore acting family. This week's selections are from Ethel Barrymore. She was one of the great grand dames of American theater, but Ethel also had a successful career in Hollywood as a character actress. First up is her Oscar-winning role as the tough but tender Cockney mother of ne'er-do-well Cary Grant in None But the Lonely Heart (1944) at 8 p.m. The Spiral Staircase (1945) at 10 p.m. is a crackling psychological horror movie about a mysterious killer who stalks a young woman (Dorothy McGuire) in a New England mansion owned by Barrymore's character.
Late Night Pick: Pinky (1949), which is about racism in forties America, features great performances from Barrymore, Jeanne Crain, and Ethel Waters.

Daytime Theme: Movies about dangerous waters. The morning starts out with Sea Devils (1937) at 6:30 a.m. which features Victor McLaglen as a Naval officer whose beautiful daughter (Ida Lupino) attracts a lot of attention from his sailors. Around the World Under the Sea (1965) at 4:30 p.m. features Sea Hunt star Lloyd Bridges leading a crack team of underwater explorers that includes The Man From U.N.C.L.E. hearthrob David McCallum. Captain James Mason faces a mutiny by his crew in the seafaring adventure The Decks Ran Red (1958) at 6:30 p.m.
Primetime Lineup: Author and pioneering feminist Gloria Steinem is TCM's guest programmer for April. Her first choice is the quirky drama A Taste of Honey (1962) at 8 p.m. Steinem calls this movie about a pregnant teen (Rita Tushingham) and her gay best friend (Murray Melvin) "a very moving piece of life." Next up is the all-time classic Breakfast at Tiffany's (1961) at 10 p.m., which Steinem says has a "sexuality and adventure that is rare for its time."
Late Night Pick: Steinem calls the thriller Z (1969) at 2:15 a.m. one of the most profoundly political films ever made. 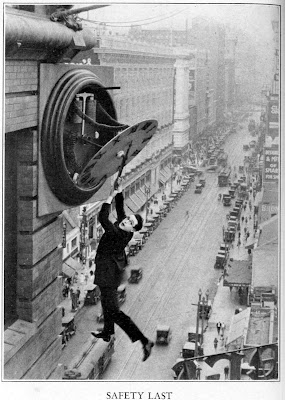 Daytime Theme: A birthday tribute to silent comedian Harold Lloyd who was born April 20, 1893, in Burchard, Neb. Lloyd started out as a Charlie Chaplin imitator, but he became one of the most popular stars in silent films when he created his own character, a bespectacled, boater-wearing striver who often found himself in precarious situations. First up is Safety Last! (1923) at 7:15 a.m., one of the most famous movies of the silent era, which features Lloyd's daredevil climb up a skyscraper. The Freshman (1925) at 10 a.m. finds Lloyd joining the college football team with hilarious results, while The Milky Way (1936) at 3 p.m. is a sound film in which Lloyd plays a meek milkman turned boxer.

Primetime Lineup: TCM will feature a festival of classic German cinema each Wednesday in April. Tonight's lineup features movies from the great director Fritz Lang starting with Dr. Mabuse, The Gambler and Dr. Mabuse, Inferno at 8 p.m. These silent films are about a criminal mastermind played by Rudolf Klein-Rogge who controls the Berlin underworld.
Late Night Pick: M (1931) at 5:45 a.m. is one of the masterpieces of world cinema featuring a great performance from Peter Lorre as a tortured child killer.

Daytime theme: Movies starring Rudy Vallee or Robert Morse. Vallee plays himself in Gentlemen Marry Brunettes (1955) at 9 a.m. a sort of sequel to Gentelman Prefer Blondes (1953), which stars Jane Russell and Jeanne Crain as sisters on the loose in Paris. Vallee also plays himself in The Helen Morgan Story (1957) at 10:45 a.m., which features a sensational performance from Ann Blyth as the the torch singer. The Loved One (1965) at 1 p.m. stars Morse as an Englishman who moves to Los Angeles and becomes a funeral director.
Primetime lineup: Two movies starring Jack Lemmon starting with the all-time classic Some Like It Hot (1959) at 8 p.m. followed by Lemmon's second film with his frequent co-star Walter Matthau, The Odd Couple (1968) at 10:15 p.m.
Late Night Pick: The China Syndrome (1979) at 2:30 a.m. is an engrossing thriller about the near meltdown of a nuclear power plant.

Daytime theme: Movies about blondes. Smart Blonde (1936) at 7 a.m. is the first in a series of mystery movies about wisecracking female reporter Torchy Blane (Glenda Farrell in this movie, although Torchy was also played by Lola Lane and Jane Wyman). Smart Blonde centers around the murder of a nightclub owner. In my opinion, Blonde Crazy (1931) is the best of James Cagney-Joan Blondell movies, and Bombshell (1933) at 6:15 p.m. is an early screwball comedy starring Jean Harlow as a glamorous film star who can't escape her platinum blonde image.
Primetime lineup: TCM will spend Friday nights in April celebrating the talents of its star of the month, Judy Garland. This week Garland co-stars with Angela Lansbury in The Harvey Girls (1946) at 8 p.m. followed by the classic holiday musical Easter Parade (1948) at 10 p.m. co-starring Fred Astaire, Peter Lawford, and Ann Miller.
Late Night Pick: Summer Stock (1950) at 2 a.m. was Garland's last musical for MGM. It's about a theatrical troupe led by Gene Kelly who invade farmer Garland's barn,  and it also happens to be my personal favorite among Garland's movies. There are a lot of great numbers in Summer Stock, but "Get Happy" is a high point in Garland's career.

TCM's prime time lineup is all about legendary Broadway impresario Florenz Ziegfeld. The night begins with Barbra Streisand playing Ziegfeld star Fanny Brice in the musical biopic Funny Girl (1968) at 8 p.m. followed by another biopic, The Great Ziegfeld (1936), starring William Powell as the man himself.

The Sunday Night Feature has two 1968 comedies about blended families. First up is Yours, Mine and Ours at 8 p.m., which stars Henry Fonda and Lucille Ball as widows who marry and raise their combined 18 children. Next is With Six You Get Eggroll  at 10 p.m. about the romance between widows Brian Keith and Doris Day.