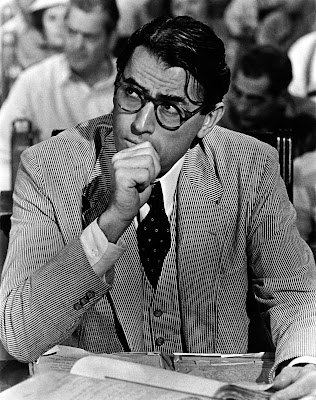 To Kill a Mockingbird (1962), starring Gregory Peck, is one of the old Hollywood favorites airing on TCM this week.


This week, TCM is airing great movies from stars like Judy Garland, Gregory Peck, and John Barrymore.  Plus, they are featuring films about reporters and Cinderella stories. So, without further ado, let's jump right in to this week's offerings. Just a note: the highlighted text has links to full length articles.

Best Day to DVR: Tuesday, which features an all-day celebration of Gregory Peck's 100th birthday with 11 films and one documentary.

This is a great week for . . .: musicals fans. There are four great Judy Garland musicals airing on Friday night, Julie Andrews in Victor/Victoria on Thursday late night, and two little-seen Cinderella musicals on Sunday prime time.

Daytime Theme: A birthday tribute to Anthony Perkins, who was born April 4, 1932, in New York City. Perkins will always be mama's boy Norman Bates to old Hollywood fans, but this talented actor had a rich and diverse career. One of Perkins' first film roles was in The Actress (1953) at 6:45 a.m. where he plays the boyfriend of a young girl (Jean Simmons) who dreams of a theatrical career. Green Mansions (1959) at 12:30 p.m. is one of the most unusual films of Audrey Hepburn's career. She stars as a native woman who falls in love with Perkins' adventurer in turn-of-the-century Venezuela. Orson Welles' little-seen masterpiece The Trial (1962) is airing at 4 p.m. It is based on Franz Kafka's classic novel, and stars Perkins as a man who stands trial for an unknown crime.
Primetime Lineup: TCM is featuring movies from the legendary Barrymore acting family each Monday in April. This week's selections are from John Barrymore. Known as "The Great Profile" during his lifetime, he was one of the great matinee idols of early films. Barrymore's silent classic Don Juan (1926) will air at 8 p.m. followed by the early sound film A Bill of Divorcement (1932) at 10 p.m. This film was Katharine Hepburn's screen debut.
Late Night Pick: Barrymore played Scotland Yard detective Col. A.J. Neilson in the series about gentleman adventurer Bulldog Drummond. One of the best of these movies is Bulldog Drummond's Revenge (1937) at 3:45 a.m. (Thanks to the estimable Caftan Woman for pointing out that I got the characters confused).

Daytime Theme: TCM is celebrating Gregory Peck's centennial -- the iconic leading man was born April 5, 1916, in La Jolla, Calif. -- with an all-day festival of his best films. Man With a Million (1953) at 7:30 a.m. is a rollicking British comedy that features Peck in one of his few comedic roles as an American stranded in England who comes across a million-pound note. This movie features great supporting performances from character actors Ronald Squire and Wilfrid Hyde-White. The Yearling (1946) at 3:30 p.m. features one of Peck's best performances as the father of a pioneer family in 19th century Florida. On the Beach (1959) at 5:45 p.m. is a hard-to-find drama from director Stanley Donen that stars Peck and Ava Gardner as one of the few survivors of a nuclear apocalypse.
Primetime Lineup: TCM is airing two classic Peck movies from 1962. First up is the thriller Cape Fear at 8 p.m. followed by Peck's Academy-Award winning performance as noble lawyer Atticus Finch in To Kill a Mockingbird at 10 p.m.
Late Night Pick: The all-star World War II drama The Guns of Navarone (1961) at 2 a.m. is simply one of the best suspense movies ever made in old Hollywood.

Daytime Theme: Movies about reporters. Start off your morning with one of the best newspapers movies of all time, The Front Page (1931) at 7:45 a.m., which stars Adolphe Menjou as a desperate editor who tries to keep an ace reporter (Pat O'Brien) from quitting. Each Dawn I Die (1939) at 4:30 p.m. features James Cagney as a reporter who gets thrown in the big house for a crime he didn't commit. Keeper of the Flame (1942) at 6:15 p.m. stars Katharine Hepburn as a widow who is hiding dangerous secrets about her late husband from reporter Spencer Tracy.

Primetime Lineup: Tonight's lineup features movies starring Mexican actor Arturo de Cordova. First up is the costume drama Frenchman's Creek (1944) at 8 p.m., which stars Cordova as a pirate who enchants British aristocrat Joan Fontaine. Next is New Orleans (1947) at 10 p.m., which features Cordova as a gambling hall owner who gets turned on to jazz by the likes of Louis Armstrong and Billie Holiday.
Late Night Pick: Cordova has a crucial supporting part in the Gary Cooper-Ingrid Bergman adaptation of Ernest Hemingway's novel For Whom the Bell Tolls (1943) at 1:45 a.m. 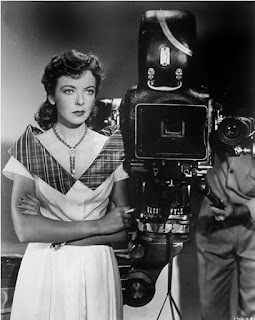 Daytime theme: Movies starring and directed by Ida Lupino. Lupino is sensational as a psychotic femme fatale in the truck-driver drama They Drive By Night (1940) at 8 a.m. She has a crucial role in the seminal film noir High Sierra (1941) at 9:15 a.m. as the girlfriend of a gangster (Humphrey Bogart) on the lam. Lupino also directed one of the best fifties films noir. The Hitch-Hiker (1953) at 6:45 p.m., is about two fishing buddies (Edmond O'Brien, Frank Lovejoy) who pick up the wrong passenger (William Talman).
Primetime lineup: Tonight features a lineup of movies directed by Blake Edwards. Edwards was best-known for comedy, but he was also adept at directing dramas like the searing portrait of alcoholism, Days of Wine and Roses (1962) at 8 p.m. The Party (1968) at 10:15 p.m. features Edwards working with his longtime collaborator Peter Sellers in a comedy about an Indian actor who gets invited to a lavish Hollywood party.
Late Night Pick: Edwards best-known movie, Breakfast at Tiffany's (1961), airs at 5 a.m.

Daytime theme: Movies featuring popular forties actress Ella Raines. Cry Havoc (1944) at 1:15 p.m. is a fantastic World War II drama about a group of army nurses on the island of Bataan. Tall in the Saddle (1944) at 5 p.m. features John Wayne and fiery beauty Raines butting heads over the control of an Arizona ranch. The Phantom Lady (1944) at 6:30 p.m. is a great noir in which Raines plays the loyal girl Friday of a man (Alan Curtis) accused of his wife's murder.
Primtime lineup: TCM will spend Friday nights in April celebrating the talents of its star of the month, Judy Garland. This week you can gather the entire family for the all-time classic The Wizard of Oz (1939) at 8 p.m. followed by the documentary The Wonderful Wizard of Oz: 50 Years of Magic (1990) at 10 p.m.
Late Night Pick: Little Nellie Kelly (1940) at 1:15 a.m. is a George M. Cohan musical that features Garland as the daughter of Irish immigrants who belts out "It's a Great Day for the Irish" during New York City's St. Patrick's Day parade.

TCM's primetime lineup is all about actress Jane Wyman. The night begins with director Billy Wilder's The Lost Weekend (1953) at 8 p.m. followed by Wyman's Oscar-winning performance as a deaf-mute woman in Johnny Belinda (1948) at 10 p.m. The night winds up with Wyman as the matriarch of an Illinois farming family in So Big (1953) at midnight.

The Sunday Night Feature has two little-seen musicals based on the classic fairy tale, Cinderella. First up is The Glass Slipper (1955) at 8 p.m., a lavish MGM musical starring Leslie Caron and Michael Wilding. Next is The Slipper and the Rose (1976) at 9:45 p.m. a British musical that stars Gemma Craven and Richard Chamberlain, who was then at the height of his TV fame.