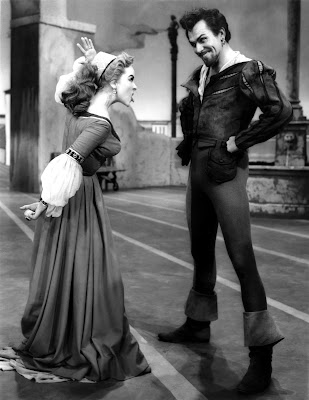 Kiss Me Kate (1953), starring Kathryn Grayson and Howard Keel, is one of the 1001 classic movies you should see.

Each Monday, I'm going to recommend a classic movie you should see (for the reasons behind the 1001 series and reviews of earlier films covered go here). Throughout April, I'll commemorate the 400th anniversary of English playwright William Shakespeare's death (he died on April 23, 1616) with a look at some of the best old Hollywood films inspired by the bard's work. This week's selection is composer Cole Porter's musical, Kiss Me Kate, which is inspired by Shakespeare's comedy, The Taming of the Shrew.

Kiss Me Kate tells the story of Fred Graham (Howard Keel) and Lilli Vanessi (Kathryn Grayson), a divorced couple who are both big Broadway stars. When Fred hires Lilli to play the feisty Katherine in a musical adaptation of The Taming of the Shrew, sparks fly as the couple bicker over everything from Lilli's line readings to Fred's relationship with the comely dancer Lois Lane (Ann Miller), who plays Katherine's sister Bianca in the play. 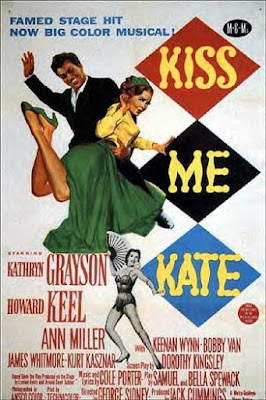 Kiss Me Kate was a smash hit on Broadway when it opened in 1948. Several Hollywood studios and British producer Alexander Korda all wanted to adapt Kiss Me Kate to the big screen, but MGM, which was then the premier studio for musicals, eventually ended up making the film. Hollywood censors did cut some of the show's saucier moments -- in the play Lilli repeatedly yells, "you, bastard" to Fred; this was changed to "you, louse" in the movie -- and the studio added one number, "From This Moment On," from another Porter musical, but despite those changes the musical made it onto the big screen largely intact. The final movie was popular with both the critics and the public, and it became a landmark among MGM musicals.

Porter and Samuel and Bella Spewack, who wrote the dialogue, cleverly play off of the original structure of The Taming of the Shrew in Kiss Me Kate. Shakespeare wrote the comedy as a play within a play, and Porter and the Spewack's shrewdly kept that structure in the musical. The play Fred is mounting is billed as a musical written by Cole Porter, and the film even has a character named Cole Porter (Ron Randell) who rehearses with the cast. Several of Porter's witty songs reference both Shakespeare and The Taming of the Shrew, most notably "I've Come to Wive It Wealthily in Padua," Katherine's feminist declaration "I Hate Men," and "Brush Up Your Shakespeare."


Kiss Me Kate Viewer's Guide: This movie is one of MGM's best musicals of the 1950's filled with lavish production numbers and big stars. Here's what to look for when you watch:
1. 3-D. Kiss Me Kate is mostly shown in 2-D today, but it was originally made in 3-D to capitalize on the early fifties fad that Hollywood executives hoped would lure audiences away from TV. This explains why all of the characters throw things at the screen throughout the movie: Everything from furniture to a banana gets lobbed at the audience.
2. Miller. Miller was one of the most sensational tap dancers in old Hollywood history, and Kiss Me Kate is a great showcase for her talents. She dances up a storm in several numbers, but nothing can top the "Too Darn Hot" number, where she practically burns up the screen.
3. Keel. Keel, who was a top MGM star during the 1950's, possessed an exceptional baritone voice, but he could be a bit bland onscreen. That's not the case in Kiss Me Kate, especially once he begins playing the Petruchio character in the play within the play (it's amazing what a goatee and an earring can do for someone's screen persona). Keel is in fine voice throughout the movie, but he has a commanding stage presence, especially in the "Where Is the Life That I Led" number, where he has the audience eating out of the palm of his hand.
4. Bob Fosse. The legendary choreographer has a small part in the movie, but it made a big difference in his career. Fosse, who was then a dancer and assistant choreographer at MGM, choreographed a short routine for himself and Carol Haney in Fosse's distinctive style (yes, folks, there are jazz hands). When the film was released, Fosse was noticed by choreographer Jerome Robbins, which launched him on his Broadway career.

Other critics: Kiss Me Kate is rated 90 percent fresh at Rotten Tomatoes, and Leonard Maltin calls it "bright"  and "outstanding" in a three and one-half star review for his Classic Movie Guide. Critics in 1953 mostly praised the musical with a few minor quibbles. Bosley Crowther of The New York Times called Kiss Me Kate "beautifully staged, adroitly acted and really superbly sung affair—better, indeed, if one may say so, than the same frolic was on the stage," but he did complain that the movie "had the silliest and clumsiest beginnings that ever a musical has had." The Variety critic called the movie "eminently satisfying" but added that the 3-D effects "means little in added entertainment."

The bottom line: The gender politics in Kiss Me Kate are somewhat outdated, but the film is still a delightful romp that is one of the most joyous experiences in old Hollywood films.

Availability: Kiss Me Kate will air at 5:45 a.m. June 9 on TCM. It is also available on DVD, Blu-ray, and video on demand.

Next week, I'll continue with the Shakespeare theme by looking at the Western, Man of the West (1958), which is partially based on King Lear.