'Frankly, My Dear' From Gone With the Wind 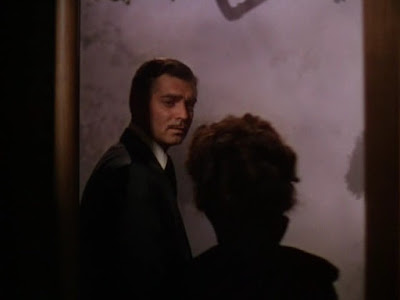 Today, I'm writing about the story behind Rhett Butler's famous last line in Gone With the Wind (1939).

This article is part of The Classic Quote Blogathon hosted by The Flapper Dame.


Rhett Butler's final line in Gone With the Wind (1939), "Frankly, my dear, I don't give a damn," is one of the most famous quotes in old Hollywood history.  Clark Gable's crackling delivery of Rhett Butler's famous kiss-off to Scarlett O'Hara (Vivien Leigh) secured his place as a movie icon, but the line has also endured in popular culture (a quick Google search of "frankly, my dear" reveals the phrase being used in headlines for everything from proper English grammar to the speaking patterns of South Carolinians). Despite the quote's omnipresence today, the use of the word, "damn," was highly controversial in its time, and the famous line almost didn't make it into the final film.

A version of the quote does appear in Margaret Mitchell's Pulitzer Prize-winning novel, which became a massive bestseller after it was published in 1936. Millions of Americans caught up in the Great Depression identified with Scarlett's triumphs and tragedies, and they were mesmerized by her tempestuous love affair with the professional gambler turned blockade runner, Rhett Butler. However, readers who were looking for Scarlett and Rhett's happily ever after, were deeply disappointed when, in the novel's final chapter, Rhett walks out of the weeping Scarlett's life by telling her, "my dear, I don't give a damn."

Independent Producer David O. Selznick bought the film rights for $50,000 one month after the novel was published. Selznick and screenwriter Sidney Howard knew they had to excise several controversial parts of the novel, but Selznick, whose 11th commandment was "thou shalt honor thy expensive source material," wanted to leave the ambiguous ending intact. Howard included Rhett's final goodbye in the script, adding the "frankly" to give it a bit of extra zing, but Selznick knew it would be an uphill battle to get that quote into the finished movie.

The Hays Office, which was the official censor for the Motion Picture Production Code, had not allowed any profanity in American films since 1934 when the code first began to be strictly enforced. Prior to that, there had been a few uses of "damn" in silent films and early talkies, but the word was mostly used in the religious sense, such as a title card from the World War I drama, The Big Parade (1925), that read "God damn their souls." Selznick toyed with several variations of the quote -- his personal favorite was "frankly, my dear, I don't care" -- and he even solicited alternate lines from his staff  (go here for the whole list) that range from the slangy ("frankly, my dear, I don't give a hoot") to the melodramatic ("frankly, my dear, the whole thing is a stench in my nostrils") to the unnecessarily wordy ("frankly, my dear, I'm not even indifferent, I just don't care").

Finally, Selznick decided that no other alternative had the impact of the original, and he used his considerable powers of persuasion to get the Hays Office to relent. Selznick rained down memos on the censors stating that "it is my contention that this word as used in the picture is not an oath or a curse. The worst that could be said of it is that it’s a vulgarism."

In the end, Selznick got his way. The Motion Picture Association amended the production code on Nov. 1, 1939, to allow the use of "damn" in American movies if it was part of the historical record or part of a major literary work. Gone With the Wind had its triumphant premiere on Dec. 13, 1939, with Gable uttering the shocking phrase in the final moments of the film.

Today, "frankly, my dear" is still one of the most memorable quotes in old Hollywood history. It topped the American Film Institute's list of 100 movie quotes, earning the No. 1 spot over other pop culture staples like "I'm gonna make him an offer he can't refuse" from The Godfather (1972) and Marlon Brando's "I coulda been a contender" speech from On the Waterfront (1954).

I'll leave you with a fun video from W magazine of actors recreating Gone With the Wind's final scene. Frankly, I don't know who half these people are, but I'm going to give the win to Eddie Redmayne for most dramatic and Kristen Wiig for the funniest delivery.


Gone With the Wind is available on DVD, Blu-ray and video on demand. 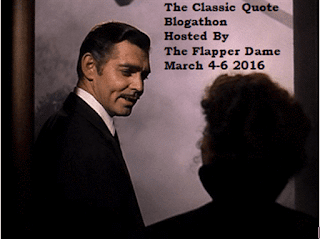