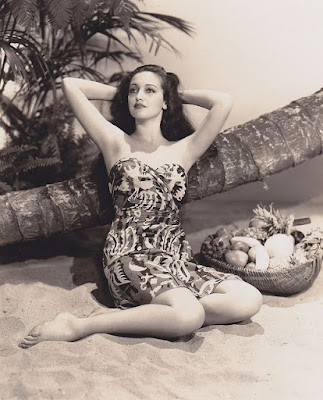 Today, I'm looking at actress Dorothy Lamour's influence on the fashion industry. Her trademark sarongs, which were originally designed by Edith Head, became a fashion craze in the late 1930's.

This article is part of Dorothy Lamour: The "Dot" Blogathon hosted by Font & Frock and Silver Screenings.

The next time you wear a sarong, you can thank two old Hollywood icons. The talents of designer Edith Head and the exotic beauty of actress Dorothy Lamour made this obscure Southeast Asian wardrobe item an international sensation that is still a fashion staple.  Like many things in old Hollywood, Head and Lamour's little Polynesian dress came from a combination of luck, timing and talent. Here's the story behind one of the most recognizable costumes in movie history.

Lamour's journey to old Hollywood icon began in 1935 when she was unknown contract player at Paramount Pictures. The studio was having trouble casting the female lead for a B movie called The Jungle Princess, a goofy Tarzan knock-off that was part of the mid-thirties craze for South Seas movies. Actress Evelyn Venable was the studio's first choice, but she flatly refused. Studio executives then turned to Lamour, a popular big band singer who just had a bit part in her first Paramount movie, the comedy College Holiday (1936).

Lamour was perfect for the part of Ulah, a Malaysian woman who lives in the jungle with her pet tiger until she falls for a dashing Englishman played by Ray Milland. Although Lamour was born in New Orleans of Creole, Spanish, and Irish descent (she never visited the South Seas until she was in her 70's), her dark beauty and flowing hair gave her a Polynesian look that was plausible for thirties audiences.

The task of designing Lamour's costumes fell to Edith Head, who was then one of Paramount's top three costume designers. The Jungle Princess presented her with a unique challenge: she had to make Lamour look sultry and culturally appropriate and satisfy the movie censorship code. Head decided to adapt a traditional Southeast Asian wardrobe item, the sarong, into the perfect costume for Lamour.

Ironically, traditional sarongs are usually worn by men in Southeast Asian countries like Indonesia, although there are female variations of the garment. They are made from colorful fabric that is draped around the waist and worn much like a kilt. Head kept the sarong's signature draping and brightly colored floral patterns and made them into a short dress that looked sensational on Lamour.

The Jungle Princess was a huge hit, and both Lamour and Head followed up with another sarong-athon in director John Ford's disaster epic, The Hurricane (1937). Soon, the costumes Head designed became a national sensation. Women everywhere donned sarong-draped evening gowns and dresses and skirts in bright floral patterns that imitated Lamour's glamorous look.

Lamour continued to wear her signature sarongs throughout her career, especially in her "Road" movies with Bing Crosby and Bob Hope, although they weren't always designed by Head. For her part, Lamour expressed mixed feelings about being labeled the "Sarong Queen" of Hollywood. While she readily admitted that the sarong put her on the map -- "thank God for that little strip of cloth," she told People magazine -- she often lamented the fact that typecasting limited her choice of roles. "I made 60 motion pictures and only wore the sarong in about six pictures, but it did become a kind of trademark," she told People. "And it did hinder me. They expect you to always be the young girl leaning against the palm tree. Why should you want to act?"

Despite Lamour's misgivings about her sarong-draped image, she and Head were always fond of each other, according to David Chierichetti's biography, "Edith Head: The Life and Times of Hollywood's Celebrated Costume Designer." Head designed Lamour's wedding dress and the star told Chierichetti that "she [Head] is the kind of person that I may not see for several years and then I run into her, and we start talking, and it's like we had been talking just the day before."

Head's design is still iconic today and one of the sarongs Lamour wore even made it into the Smithsonian Institution's costume design collection. 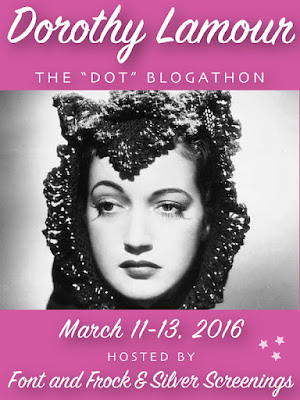 Click here for my second Dot Blogathon entry on The Road to Singapore.