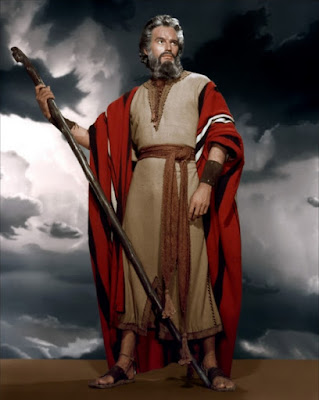 The Ten Commandments (1956), starring Charlton Heston, is one of the 1001 classic movies you should see.

Each Monday, I'm going to recommend a classic movie you should see (for the reasons behind the 1001 series and reviews of earlier films covered go here). Throughout March, I'll be celebrating the 60th anniversary of The Ten Commandments (1956) by looking at three of old Hollywood's best Biblical epics. This week, I'm looking at The Ten Commandments itself, which TCM and Fathom Events are bringing to movie theaters across the U.S. next week.

The Ten Commandments tells the story of ancient Jewish patriarch Moses (Charlton Heston), who is adopted by an Egyptian princess (Nina Foch) when he is only a baby. Moses seems destined for a life of luxury and marriage to the beautiful Nefretiri (Anne Baxter) until he finds out about his true ancestry. Moses then embarks on a long physical and spiritual journey that leads him to become God's chosen leader to free the Jews from slavery in Egypt. 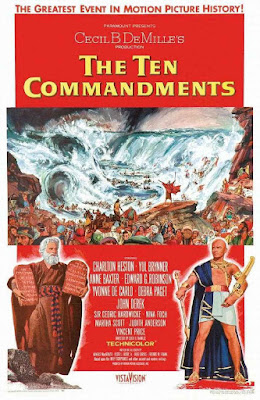 The Ten Commandments, like all of the movies we will consider this month, is a remake of a silent film. The 1923 version of The Ten Commandments was one of the highlights of Cecil B. DeMille's career, but the director thought he could surpass his earlier triumph with a Technicolor spectacle that would be his greatest screen triumph. With that in mind, DeMille and his team of researchers, costume designers, set decorators and special effects artists threw themselves into creating an authentic portrait of the ancient world and the Bible. The film was one of Paramount Pictures biggest moneymakers, and The Ten Commandments has become a home-viewing staple during the Easter season, where it is one of the few classic movies that are still aired on network television.

Although DeMille liked to use pious platitudes when discussing The Ten Commandments, the movie does sometimes play fast and loose with the Bible. Much of the film's first half, especially the campy vamping of Baxter as an Egyptian princess who has the hots for Moses, does not appear anywhere in Holy Writ, but it's actually surprising how much of the Biblical story is in the movie when you compare it to DeMille's other ancient epics like Samson and Delilah (1949). The second half of the film, which is much more faithful to the Biblical Exodus story, is both reverential and awe-inspiring.


The Ten Commandments Viewer's Guide: This movie features what old Hollywood did best on a grand scale. There's big movie stars in gorgeous costumes, ancient Egypt recreated in glorious Technicolor, and 3 1/2 hours of eye-popping spectacle . Here's what to look for when you watch:
1. The special effects. The Ten Commandments was a groundbreaking special effects film when it premiered in 1956, and the movie's set pieces, like water turning to blood, the writing of the Ten Commandments, and the parting of the Red Sea, are still spectacular in today's CGI age, especially if you see it on the big screen.
2. DeMille. The director is one of the acknowledged pioneers of American film, but his greatest achievement is still The Ten Commandments. The dialogue is a bit stiff and there's certainly some overacting, but for the most part DeMille fills the screen with awe-inspiring spectacles. In my opinion, the movie's best scene is when the plague of death roams through Egypt. It terrified me as a child, and, as an adult, the scene is still authentically chilling.
3. Jewish experience. Although many of the old Hollywood studios and producers were Jewish-Americans, there is relatively little about the Jewish experience in old Hollywood movies. The Ten Commandments depicts the Jewish origin story complete with the first Seder celebrated by Moses and his family.
4. Nefretiri. Some people watch The Ten Commandments every year to see the parting of the Red Sea, while there are those of us who indulge in the annual ritual for Baxter's campy turn as the Egyptian queen whose overheated schemes to drag Moses to the altar are both sublime and (as the movie wears on) ridiculous. She also looks pretty fabulous slinking around the Nile in her Edith Head-designed gowns.

Other critics: The Ten Commandments is certified fresh at Rotten Tomatoes with a 91 percent rating, and Leonard Maltin calls it "vivid storytelling at its best" in a four star review for his Classic Movie Guide. Critics in 1956 ran out of superlatives when praising the film. Bosley Crowther of The New York Times did complain a bit about the movie's length before comparing The Ten Commandments with the fifties Civil Rights movement. "It is a moving story of the spirit of freedom rising in a man, under the divine inspiration of his Maker," he wrote. "And, as such, it strikes a ringing note today." The Variety critic praised Yul Brynner's performance as Pharaoh, but he dinged Baxter for "her old-school siren histrionics."

The bottom line: The Ten Commandments is still one of the best films old Hollywood ever made, offering big stars, gorgeous costumes, eye-popping spectacle, and a moving story that is sincerely told.

Next Monday, I'll continue the March theme of Biblical epics with a look at Quo Vadis (1951).