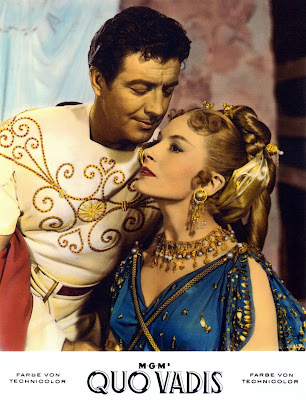 Quo Vadis (1951), starring Robert Taylor and Deborah Kerr, is one of the 1001 classic movies you should see.

Each Monday, I'm going to recommend a classic movie you should see (for the reasons behind the 1001 series and reviews of earlier films covered go here). Throughout March, I'll be celebrating the 60th anniversary of The Ten Commandments (1956) by looking at three of old Hollywood's best Biblical epics. This week, I'm looking at Quo Vadis (1951), a sumptuous spectacle about early Christians that set the style for the later Biblical epics of the 1950's.

Quo Vadis tells the story of Roman warrior Marcus Vinicius (Robert Taylor), who has just returned to the capital city after a successful campaign in Britain. Marcus could have his choice of female companionship, but he falls for a beautiful slave woman, Lygia (Deborah Kerr), who has been adopted by a Christian family. Marcus finds himself torn between his duty and his love when the Emperor Nero (Peter Ustinov) blames the Christians for the burning of Rome.

Quo Vadis is based on the 1896 novel by Polish Nobel Laureate Henryk Sienkiewicz about the early days of Christianity. The novel was made into two successful silent films, and MGM planned to make a sound version as early as 1935 that would star Wallace Beery as Nero and Marlene Dietrich as the Empress Poppaea (that character is played by Patricia Laffan in the movie). The project kept getting delayed because of World War II and financial concerns, but it finally made it to the big screen in 1951 under the direction of MGM veteran Mervyn LeRoy, and with old pro Taylor and Hollywood newcomer Kerr in the leads. Quo Vadis was a huge hit, and it led to a glut of Biblical epics, including The Ten Commandments and Ben-Hur (1959).

Quo Vadis is one of the most interesting of the Biblical epics, because it is one of the few Hollywood movies that actually deals with Catholic theology. While Hollywood  usually catered to its Catholic audience by having big name stars like Spencer Tracy and Loretta Young play priests and nuns in contemporary dramas, this movie deals with the origins of the religion. The church service depicted in the film is filled with Catholic rituals, and the Apostle Peter (Finlay Currie) is depicted in his traditional Catholic role as the first pope.


Quo Vadis Viewer's Guide: This movie set the template for later Biblical epics with its campy spectacle overlayed by a sheen of reverence. Here's what to look for when you watch:
1. Power politics. Quo Vadis is first and foremost a religious movie, but it is also an interesting glimpse into the inner-workings of the ancient Roman machine of state, especially in the interactions between Nero and his adviser Petronius (Leo Genn, in an Academy Award-nominated performance). The give and take between the two men -- with Petronius manipulating the emperor by subtly playing on Nero's vanity -- is like a toga-wearing House of Cards.
2. Ustinov. As critic F.X. Feeney points out in the documentary, "In the Beginning: Quo Vadis and the Genesis of the Biblical Epic" Ustinov's Oscar-nominated performance as Nero is the showpiece of the movie. While Nero's cruelty was meant to evoke Italian dictator Benito Mussolini, Ustinov's portrayal of the emperor as a talentless hack who thinks of himself as the supreme artist is the actor's real stroke of genius, and it actually makes the character relatable to modern audiences. Anyone who has ever been near a coffee-shop at a liberal arts college will meet dozens of "Nero's" on a Saturday night.
3. Spectacle. Every Biblical epic has at least one grand set piece, but Quo Vadis has four: Marcus' triumphant entry into Rome; Peter's sermon, which includes tableau from famous Renaissance paintings; The burning of Rome, and the killing of Christians in the Colosseum.
4. Miklos Rozsa. The Hungarian composer created a memorable score that uses ancient instruments and is based on authentic Greek and Roman melodies. Particularly haunting are Rozsa's arrangements of the lovely hymns the Christians sing in the Colosseum.

Other critics: Quo Vadis is certified fresh at Rotten Tomatoes with an 88 percent rating, and Leonard Maltin calls it a "meticulous production" in a three star review for his Classic Movie Guide. Critics in 1951 had mixed reactions to the epic. Bosley Crowther of The New York Times groused "It was made, we suspect, for those who like grandeur and noise -- and no punctuation. It will probably be a vast success." The Time magazine critic was much more impressed calling Quo Vadis "the year's most impressive cinematic sight-seeing spree." He marveled at the cost ($6.5 million), the extras (around 30,000), and the lions (63, which as the critic pointed out is more than the number of people in most movies).

The bottom line: Quo Vadis seems to get somewhat overlooked when compared with other Biblical epics, but it is well worth watching for its complex portrayal of the early days of the Christian Faith.

Availability: Quo Vadis is available on DVD, Blu-ray and video on demand.

1001 classic movies will be off next week for Easter, but I'll start next month's theme of Shakespearan films on April 4 with a look at Julius Caesar (1953).