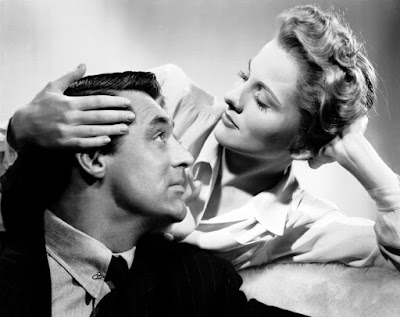 Suspicion (1941), starring Cary Grant and Joan Fontaine, is one of the 1001 classic movies you should see.

Each Monday, I'm going to recommend a classic movie you should see (for the reasons behind the 1001 series and reviews of earlier films covered go here). Today, I'm continuing February's theme of Love and Marriage Hitchcock Style, with a look at director Alfred Hitchcock's first collaboration with Cary Grant, Suspicion (1941)

Suspicion tells the story of Lina McLaidlaw (Joan Fontaine), a wealthy young woman who is something of a wallflower. When Lina meets the handsome playboy Johnnie Aysgarth (Grant), she is immediately swept off of her feet by his charm and style, although her family strongly disapproves of the match. Lina and Johnnie elope, but, after a romantic honeymoon in Europe, Lina finds out that her Prince Charming is really a reckless gambler who doesn't have a job and has no plans of looking for one. Soon, Lina believes that Johnnie is guilty of much worse crimes, including plotting her murder for an insurance settlement. 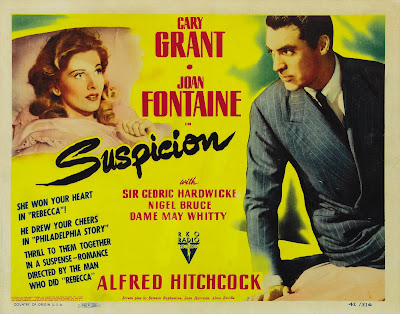 Suspicion is based on the 1932 crime novel Before the Fact written by Anthony Berkeley under the pen name Francis Iles. RKO Pictures had bought the rights in 1935, and the script had been kicking around the studio for some time with tentative plans to make a B movie starring George Sanders and Anne Shirley. When Hitchcock signed a contract with RKO, he immediately expressed interest in Before the Fact -- the director was a longtime admirer of the Iles' novels -- so Sanders and Shirley were scrapped in favor of Grant, who was RKO's biggest star, and Fontaine, who had just scored a major triumph in Hitchcock's Rebecca (1940).

The plot of Suspicion owes a lot to the old adage, "marry in haste, repent at leisure." Lina gets swept off her feet by the handsome, charming Johnnie, and it is hard for viewers to blame her when he is being played by Grant. However, Lina soon grows to regret her marriage. Johnnie is nothing like her stable, respectable father (Sir Cedric Hardwicke), and he seems intentionally callous when he pays his gambling debts by selling a pair of antique chairs that Lina received as a wedding present. In fact, the more Lina knows about Johnnie, the less she trusts him, which is a sly commentary by Hitchcock on the true nature of marriage.


Suspicion Viewer's Guide: This movie is a fantastic psychological horror movie that gives viewers an insight into Lina's mind. Here's what to look for when you watch:
1. The setting. Even though Hitchcock made Suspicion in America, he always liked to joke that Suspicion was really one of his British films. Lina is a member of the English aristocracy, and the film includes grand country houses, fox hunting, and a cast of very British character actors, including Nigel Bruce as Johnnie's blustery best friend.
2. Fontaine. Fontaine won a best actress Academy Award for her complex portrayal of Lina (it's hard to believe, but this is the only Hitchcock-directed performance that won an Oscar). Many pundits consider Fontaine's Oscar a makeup award for Rebecca -- she was nominated for that movie, but lost to Ginger Rogers in Kitty Foyle -- but I think her subtle, psychologically complex performance deserved the award. Lina begins the movie as a shy wallflower, but gradually changes to become a sophisticated woman of the world.
3. The Ending. The ending of the novel revealed Johnnie to be a serial killer, but RKO wasn't about to let their No. 1 star be portrayed onscreen as a ruthless criminal. Instead, the studio and Hitchcock tinkered with the plot until they settled on the current ambiguous ending, which Hitchcock always complained about in later interviews.
4. The glass of milk. The glowing glass of milk that Johnnie carries to Lina's bedside is one of the most famous set pieces in Hitchcock's filmography. It was achieved by putting a battery-operated light at the bottom of the glass.

Other critics: Suspicion is one of the few movies that is certified 100 percent fresh at Rotten Tomatoes, and Leonard Maltin writes that Suspicion is a "suspenser that is helped by Bruce as Cary's pal, but the finale (imposed by the Production Code) leaves viewer flat" in a three and one-half star review for his Classic Movie Guide.
Suspicion was RKO's biggest hit of 1941 and the critics of the time were equally impressed. Bosley Crowther of The New York Times heaped praise on Hitchcock's take on the novel. "Clearly, Mr. Hitchcock's problem is to give this simple story great consequence -- to build, out of slight suggestions and vague, uncertain thoughts, a mounting tower of suspicion which looms forbiddingly. And this he does magnificently with his customary casualness." The Variety critic was impressed by both Fontaine and Grant noting that, "Alfred Hitchcock’s trademarked cinematic development of suspenseful drama, through mental emotions of the story principals, is vividly displayed in Suspicion, a class production provided with excellence in direction, acting and mounting."

The bottom line: Despite a flawed ending, Suspicion is a great Hitchcock film. Bruce's blustery turn as the classic English gentleman is reason enough to watch the movie, but the two leads also give exceptional performances, and Hitchcock gradually ramps up the suspense to nail-biting levels.

Availability: Suspicion will air at at 12:15 a.m. May 12 on TCM. It is also available on DVD, Blu ray and video on demand.

Next Monday, I'll continue the February theme of Love and Marriage: Hitchcock Style with a look at The Man Who Knew Too Much.