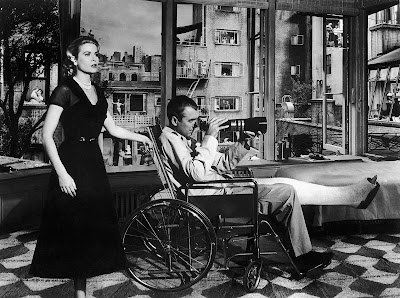 Rear Window (1954), starring Grace Kelly and James Stewart, is one of the 1001 classic movies you should see.

Each Monday, I'm going to recommend a classic movie you should see (for the reasons behind the 1001 series and reviews of earlier films covered go here). Today, I'm continuing February's theme of Love and Marriage Hitchcock Style, with a look at one of director Alfred Hitchcock's best films, Rear Window (1954)

Rear Window tells the story of L.B. "Jeff" Jefferies, a roving international photographer who is laid up for six weeks because he broke his leg while covering an auto race. To pass the time, Jeff begins watching his neighbors in his courtyard apartment building, but what starts out as an innocent pastime quickly turns into something much more sinister when Jeff believes he witnesses a murder. 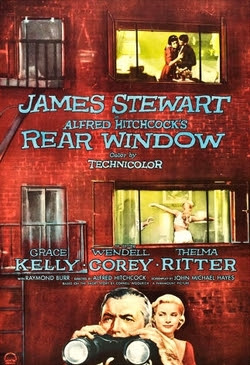 Rear Window is based on a 1938 short story, "It Had To Be Murder," by crime writer Cornell Woolrich. A script had been kicking around Paramount Pictures for quite some time, but the project largely fizzled out after studio executives expressed doubts about filming the complicated story. Hitchcock, who had recently signed a lucrative contract with Paramount, loved both the story's theme of voyeurism (more on that below), and the challenge of making the complex project work on film.

Although Jeff is technically still a bachelor, Rear Window is suffused with themes of love and marriage. Most of the neighbors that Jeff secretly watches are caught up in some type of romantic entanglement: a comely ballet dancer (Georgine Darcy) has suitors virtually knocking down her door, while the woman (Judith Evelyn) living just a few apartments away can't seem to find a suitable beau. Most significantly is the traveling salesman (Raymond Burr) that Jeff suspects of murdering his invalid wife (Irene Winston). Even Jeff himself -- a confirmed bachelor, who, as the saying goes, is married to his work -- gets caught up in the marriage game when his gorgeous girlfriend (Grace Kelly) keeps pressuring him to put a ring on it.


Rear Window Viewer's Guide: This movie is both a crackling suspense story and one of Hitchcock's most innovative films. Here's what to look for when you watch:
1. The set. One of the reasons Hitchcock wanted to make Rear Window was the challenge involved in shooting the complicated story. The director knew that Paramount, which was known for lavish productions, would provide a large enough budget for the elaborate, multi-level courtyard apartment set that was needed for the film. Hitchcock brilliantly creates a small glimpse into each apartment dweller's life through their rear windows: We see amorous newlyweds (Rand Harper and Havis Davenport)  on their honeymoon, a childless couple (Sara Berner and Frank Cady) who dote on their dog, and an avant-garde sculptor (Jesslyn Fax), who likes to sun herself on the patio.
2. Voyeurism. Jeff uses low-tech equipment to spy on his neighbors, but Rear Window is a suspense film for the Internet age. Social media websites like Facebook and Instagram make us all to a certain extent "rear window spies" into the lives of others, and, like Jeff, sometimes we come to learn startling truths about people we hardly know.
3. Music. Rear Window has a traditional score during the opening and closing credits, but, otherwise, the movie's music comes from within the courtyard apartment complex. You'll hear the original song, "Lisa," which is being written by Jeff's composer neighbor throughout the course of the movie, plus Bing Crosby warbling on the radio, and a raucous rendition of "Mona Lisa" during a late-night party.
4. Raymond Burr. Burr is known to generations of classic TV fans as brilliant defense attorney Perry Mason, but in 1954, he mostly played heavies with a few side outings in Godzilla films.  As an inside joke, Hitchcock had Burr made up to look like producer David O. Selznick with whom the director had a fraught relationship.

Other critics: Rear Window is one of the few movies that is certified 100 percent fresh at Rotten Tomatoes, and Leonard Maltin calls it "one of Hitchcock's most stylish thrillers" in a four-star review for his Classic Movie Guide.
Critics in 1954 saw Rear Window as an entertaining, but lightweight movie in which Hitchcock shamelessly manipulated the audience. Bosley Crowther of The New York Times sniffed that "Mr. Hitchcock's film is not 'significant.' What it has to say about people and human nature is superficial and glib. But it does expose many facets of the loneliness of city life and it tacitly demonstrates the impulse of morbid curiosity. The purpose of it is sensation, and that it generally provides in the colorfulness of its detail and in the flood of menace toward the end." The Time magazine critic was equally dismissive, noting that Rear Window contained, "occasional studied lapses of taste and, more important, the eerie sense a Hitchcock audience has of reacting in a manner so carefully foreseen as to seem practically foreordained." Hitchcock, who was known for the meticulous planning of each film, surely got a chuckle out of that review.

The bottom line: Rear Window is a great film for old Hollywood newbies. It's a great example of Hitchcock's style, and it is a nail-biting suspense film that rewards more than one viewing.

Availability: Rear Window is available on DVD, Blu ray and video on demand.

Next Monday, I'll continue the February theme of Love and Marriage: Hitchcock Style with a look at Suspicion (1941).