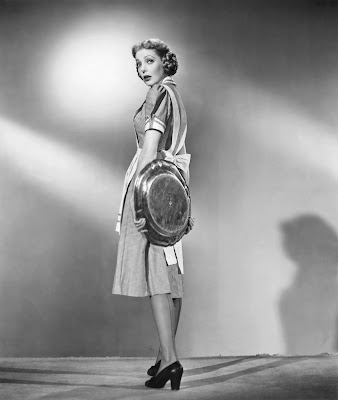 This article is part of The Loretta Young Birthday Blogathon hosted by Cinema Dilettante, Now Voyaging, and The Young Sisters Appreciation Group.


Loretta Young won her only Academy Award for her role as a feisty Swedish maid turned politician in The Farmer's Daughter (1947). This underrated film is both a great romantic comedy and a timely political thriller that takes on issues that are still relevant in 2016.

The Farmer's Daughter tells the story Katrin "Katie" Holstrom (Young), a feisty and ambitious daughter of Swedish immigrants (Harry Shannon and Anna Q, Nilsson), who leaves her rural Midwestern home to study nursing in the big city. Through a series of mishaps, she loses all her money and is forced to become a maid at the home of wealthy Congressman Glenn Morley (Joseph Cotten). Katie and Morley slowly begin to fall in love, but the pair become political rivals when  Katie's intelligence and outspoken opinions lead her to become a candidate for office. 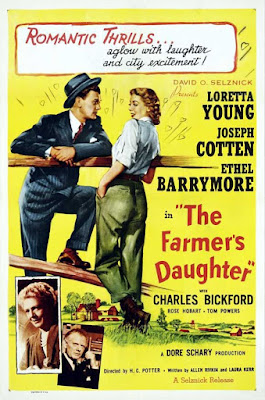 The Farmer's Daughter is based on a 1937 Finnish play by progressive writer Hella Wuolijoki, who wrote under the pen name Juhani Tervapaa. Independent producer David O. Selznick bought the rights in 1944 for two of his biggest stars, Cotten and Ingrid Bergman, but there was a long delay while screenwriters Laura Kerr and Allen Rivkin extensively rewrote the play, and Bergman's contract with Selznick ended before she could make the film. Selznick then sold the finished script and the services of Cotten and producer Dore Schary to RKO Pictures in exchange for a share of the movie's profits.

Schary's top choice for the role was always Young, but she balked, mainly because she didn't think she could master the difficult Swedish accent. Schary briefly considered Dorothy McGuire and Norwegian skating star Sonja Henje before he finally persuaded Young to take the part. Young worked extensively with dialogue coach Ruth Roberts, who had coached Bergman when she first came to Hollywood, to achieve a subtle, but convincing Scandinavian accent. "We always said Ruth took away Ingrid's Swedish accent and gave it to me," Young joked in an interview quoted in the TCM database.

In the end, Young was perfect for the part of Katie. Bergman was the best screen actress of the 1940's, but Young gives Katie a spunk and energy that the more dignified Bergman might not have brought to the role. Also, Young has a natural charisma onscreen, which makes her transition from maid to congresswoman quite believable. This is partially because of her great beauty (Young looks fabulous even a frumpy maid's costume), but Young also gives Katie a warmth and integrity that makes people take her seriously, even when she is passing out cocktails during a dinner party.

The Farmer's Daughter also has a great supporting cast. Charles Bickford received a best supporting actor Oscar nomination for playing Morley's loyal valet, but it is the great Ethel Barrymore as the Morley family matriarch who really steals the movie. She uses her beautiful voice and theatrical training to play a grande dame with a sly sense of humor (her many witty lines and her elegant wardrobe make her quite reminiscent of Maggie Smith in Downton Abbey).

Barrymore also excels at playing a woman in a man's world. Mrs. Morley is the de facto head of the local political party (the movie does not specify whether they are Republicans or Democrats), and as such she joins the men in political strategy sessions, and she is frequently the key decision maker . In fact, the role of women in politics is one of the most modern elements in  The Farmer's Daughter. Not only does Katie refuse to give up her political ambitions when she marries Morley, but in the film's final scene they enter the U.S. Capitol together as a political power couple.

This is a great movie to watch during this year's Presidential election cycle because it brings up many timely issues, including a living wage, international diplomacy, and even proper nutrition for school lunches. Katie's path to office is sometimes rocky and she even becomes  the victim of an unscrupulous smear campaign from her political rival (Art Baker), a wildly popular "man of the people" who believes in oppressing minorities and deporting foreigners once he gains office (his final comeuppance at the hands of Bickford and Barrymore is a thing of beauty).

The Farmer's Daughter was a big hit in 1947, and Young won a surprise best actress Oscar against stiff competition from Rosalind Russell, Joan Crawford, Susan Hayward, and Dorothy McGuire. The movie even spawned a successful fifties television series starring Inger Stevens as Katie. I'll leave you with some words of wisdom from Katie about a living wage. She has definitely mastered the art of a snappy political catchphrase.

The Farmer's Daughter is available for streaming on the Internet Archive. 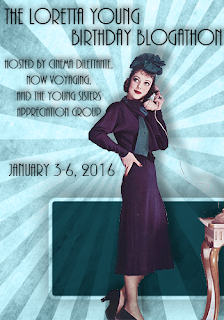 Go here for more from my past blogathons.