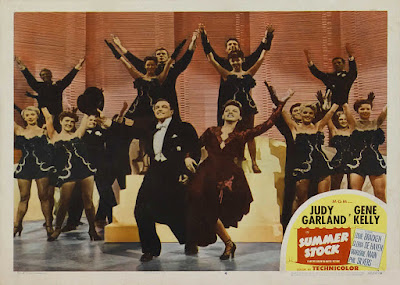 This article is part of the Backstage Blogathon hosted by Movies Silently and Sister Celluloid.


Everybody has their favorite old Hollywood musical. Mine is Summer Stock (1950), a joyous, old-fashioned movie about a group of performers who will do almost anything to put on a show. Summer Stock features exceptional lead performances from Judy Garland and Gene Kelly, a great supporting cast, and one of the best show-stopping numbers in Hollywood history.

Summer Stock tells the story of Jane Falbury (Garland), a New England farmer who leads a comfortable, although cash-strapped existence until her flighty sister (Gloria DeHaven) brings home a troupe of performers to put on a show in the Falbury barn. The usual complications ensue -- the troupe eats up all the food and wrecks Jane's prize tractor -- but Jane slowly finds herself becoming more and more attracted to the performers, especially the handsome director (Kelly).

Summer Stock was the brainchild of MGM producer Joe Pasternak, who was known for making old-fashioned, but highly profitable musicals like Anchors Aweigh (1945) and In the Good Old Summertime (1949). He wanted to reunite Garland and Mickey Rooney for an adult version of the "hey kids, let's put on a show" musicals that were wildly popular in the early 1940's; however, MGM honchos nixed Rooney because his box-office clout had significantly diminished and replaced him with Kelly, who was then one of the studio's top stars.

Pasternak also had trouble casting the role of the no nonsense Jane. Garland was always Pasternak's first choice, but she was going through a difficult time, and had been removed from Annie Get Your Gun (1950) because of a physical and emotional breakdown. June Allyson was then slated to replace Garland, but MGM chief Louis B. Mayer eventually relented and let Judy appear in Summer Stock.

Garland was feeling better than she had in a long time, but the Summer Stock shoot was still difficult. Pasternak  surrounded Garland with a supportive cast and crew, especially director Charles Walters, who had successfully worked with Judy in Easter Parade (1948), but Garland was still late or didn't show up at all on several occasions. Pasternak actually considered scrapping the entire project, but Mayer wouldn't here of it, according to Garland biographer John Fricke. "Judy Garland has made this studio a fortune in the good days, and the least we can do is to give her one more chance," Mayer told Pasternak. "If you stop production now, it'll finish her."

Amazingly, none of these problems show up on screen. Garland gives a wonderful performance: She plays Jane like a grown-up version of Dorothy Gale, a common sense farm girl who still has big dreams and whole lot of talent. Garland is surrounded by a stellar supporting cast, including Phil Silvers as a wisecracking troupe member, Marjorie Main as Jane's loyal cook, and scene-stealer Eddie Bracken as Jane's fussy fiance, who has been engaged to her for four years because he "doesn't want to rush into anything."

Kelly, who had just finished starring and co-directing in the innovative musical On the Town (1949), wasn't keen to make an old-fashioned movie like Summer Stock, but he starred in the film as a favor to Garland, who had championed his career when he was first starting out in For Me and My Gal (1942). However, Kelly didn't just phone in his performance; he put his usual hard-work and dedication into the role. He choreographed several great numbers but the standout is his solo dance to "You, Wonderful You" ( I can never get over how perfectly he splits the newspaper).

Despite Kelly's wonderful contributions,  the show-stopping number in Summer Stock is Garland's performance of "Get Happy." In fact, "Get Happy" is one of the signature performances from Garland's movie career, and many people who've never seen Summer Stock are familiar with it. "Get Happy" wasn't filmed until three months after principal shooting ended. Pasternak felt the movie lacked a big finale, so he called Walters and Garland back to the set.

By this time, Garland had lost about 20 pounds, and she and Walters decided to revisit an idea from Easter Parade. Garland had performed a song called Mr. Monotony in a fedora, tuxedo jacket, and black hose that was later cut from the movie because it was considered too risque (you can read all about it here). Judy decided to show off her newly svelte figure by wearing the same costume for "Get Happy," and the combination of Garland's diva looks and the stylish choreography led directly into Garland's successful concert career and has been widely imitated ever since.

Sadly, Summer Stock was the last MGM film for Garland. She was dismissed after her erratic behavior on Royal Wedding (1951), but, she left behind a decade's worth of great movies, including Summer Stock, which is one of the best backstage musicals ever made.

Summer Stock is available on DVD and video on demand.