Pay the Classics Forward for Christmas 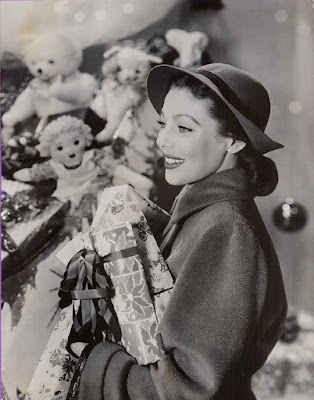 Today, I'm paying the classics forward by creating a list of some of my old Hollywood favorites just in time for the holidays. Loretta Young in The Bishop's Wife (1947) is on my list.

My fellow classic movie blogger, Aurora at Once Upon a Screen, came up with a brilliant idea for the holidays. She is inviting everyone to share their classic movie favorites in an article based on the English Christmas Carol, "The 12 Days of Christmas." So, without further ado, here's my list. Just a note:  the highlighted texts have links to full-length articles.

These dozen cinematic lords still leap off the silver screen.

1. James Cagney: An American original whose ferocious energy and charisma delighted and terrified audiences for three decades. He is unforgettable as the cocky gangster Rocky Sullivan in Angels With Dirty Faces (1938).

2. James Stewart: This aw-shucks son of Indiana, Penn., captured both the wholesomeness and anxiety of small-town America in It's a Wonderful Life (1946).

3. Henry Fonda: He became the conscience of Depression-era America through his role as the earnest Tom Joad in The Grapes of Wrath (1940).

4. Cary Grant: The epitome of elegance and sophistication onscreen, especially as a reformed jewel thief in Alfred Hitchcock's To Catch a Thief (1956).

5. Clark Gable: The symbol of American masculinity even when he was playing a British first mate in Mutiny on the Bounty (1935).

6. Gregory Peck: No matter how many prequels or sequels to To Kill a Mockingbird (1962) are published, Peck's noble portrayal of Southern lawyer Atticus Finch is the final word on Harper Lee's character.


7. John Wayne: A much more complex actor than the critics gave him credit for, which he proved through his harrowing performance as Indian hunter Ethan Edwards in The Searchers (1956).

8. Kirk Douglas:An actor of immense onscreen energy, this living legend was and will always be Spartacus (1960).

9. Gary Cooper: His complex portayal of a hobo who becomes a media sensation in Meet John Doe (1941) is one of his best collaborations with director Frank Capra.

10. Robert Donat: A versatile British thespian who was at his most charming in the Hitchcock thriller The 39 Steps (1935).

11: Charles Laughton: He certainly wasn't a typical leading man, but his keen intelligence and ability to play both heroes and villains made him one of the top stars of the 1930's. Never better than as an English valet who comes to  America in Ruggles of Red Gap (1935)

12: Steve McQueen: An underrated actor who was great playing loners like his rogue cop in Bullitt (1968).

These ladies and gents dance up a storm.

1. "Night and Day" from The Gay Divorcee (1934): The most remembered dance of Fred Astaire and Ginger Rogers 10 films together.

2. The title number from Singin' in the Rain (1952): Gene Kelly's water-logged tap dance is part of every old Hollywood highlight reel.

3. "Steppin' Out With My Baby" from Easter Parade (1948): Astaire's slow-motion masterpiece has been ripped off by everyone from Michael Jackson to the Wachowski siblings.

4. "Get Happy" from Summer Stock (1950): This was Judy Garland's last film for MGM, but she cemented her screen legend with this sophisticated number.

7. Staircase dance in The Little Colonel (1935): Shirley Temple and the legendary Bill "Bojangles" Robinson were the first interracial dance pair in American film.

8. "Our Love Is Here to Stay" from An American in Paris (1951): Everyone talks about the ballet sequence that ends the film, but this romantic dance between Leslie Caron and Kelly is simply divine.

9. "That Yankee Doodle Boy" from Yankee Doodle Dandy (1942): Cagney always fancied himself a song-and-dance man, and he proved his chops with this acrobatic number.

10.  "The Small House of Uncle Thomas" from The King and I (1956): Jerome Robbins choreographed many memorable movie dance sequences. This re-telling of Uncle Tom's Cabin is one of his best.

11. "After the Ball, That's All" AKA "Commence to Dancing" from Way Out West (1937): Stan Laurel and Oliver Hardy aren't exactly Fred and Ginger, but their big-hearted innocence, not to mention their pretty sweet dance moves, make this one of the most charming moments every put on celluloid.

These pied pipers of the silver screen created enduring classics.

3. John Huston: One of the most inventive minds in old Hollywood: Watch The Treasure of the Sierra Madre (1948).

5. Billy Wilder: A writer and director of corrosive wit: Watch The Apartment (1960).

8. Ernst Lubitsch: Love always was his game: Watch The Shop Around the Corner (1940).

10. David Lean: Simply the best British director ever. Watch The Bridge on the River Kwai (1957).

The drumbeats of war were always a favorite old Hollywood subject.

1. The Red Badge of Courage (1951): Huston's Civil War masterpiece is based on Stephen Crane's novel.

2. All Quiet on the Western Front (1929): A seminal anti-war film about German soldiers in World War I.

3. Drums Along the Mohawk (1939): One of the few good Revolutionary War movies.

5. Zulu (1964): A nail-biting account of a battle between British soldiers and native warriors.

6. They Were Expendable (1945): This Ford classic follows a group of PT-boat officers in the Pacific.

7. The Enemy Below (1957): American Robert Mitchum and German Curd Jurgens face-off in a WWII naval battle.

8. The Great Escape (1962): An all-star film about an escape from a Nazi prisoner of war camp. It's miles better than Hogan's Heroes.

9. Lawrence of Arabia (1962): An intimate epic of guerrilla warfare in the Middle East.

These lovely maids milked laughs on the silver screen.

3. Barbara Stanwyck: A versatile actress who could play a very funny man-killer: Watch The Lady Eve (1941)

8. Thelma Todd: This ice-cream blonde could go toe-to-toe with Laurel and Hardy and The Marx Brothers. Watch Monkey Business (1931).

These ladies were more lovely than swans a-swimming.

1. Grace Kelly: She earned the title Her Serene Highness even before she became a princess. Watch The Swan (1956).

2. Audrey Hepburn: A fashion icon and humanitarian who was beautiful inside and out. Watch Roman Holiday (1953).

4. Loretta Young: A luminous beauty who was also a versatile actress: Watch The Bishop's Wife (1947).
5. Ingrid Bergman: An actress of enormous vulnerability and tenderness. Watch The Bells of St. Mary's.

7. Maureen O'Hara: This lovely redhead earned her title as "the queen of Technicolor." Watch The Quiet Man 1952).

1. Mary Astor as Brigid O'Shaughnessy in The Maltese Falcon (1941): This femme fatale can't stop lying even when her life depends on it.

2. Orson Welles as Harry Lime in The Third Man (1949): The racketeer can't stop scheming even when he's supposed to be dead.

3. Bette Davis as Leslie Crosbie in The Letter (1940): This lacemaking housewife spins the ultimate web of murder and deceit.


4. Robert Mitchum as Rev. Harry Powell in The Night of the Hunter (1955): This not-so-holy preacher will do anything to get a fortune in stolen money away from two innocent children.

5. Judith Anderson as Mrs. Danvers in Rebecca (1940): This scheming housekeeper ruins the life of the second Mrs. de Winter.

6. Anne Baxter as Eve Harrington in All About Eve (1950): Baxter's character is basically the Terminator in the guise of a meek wannabe actress.

These couples may not have exchanged five gold rings, but their doomed love affairs are for the ages.

1. Humphrey Bogart and Ingrid Bergman as Rick and Ilsa in Casablanca (1942): They'll always have Paris, and we'll always have this all-time great romance.

2. Fred MacMurray and Barbara Stanwyck as Walter and Phyllis in Double Indemnity (1944): This murderous couple started out at "90 miles an hour" and went downhill from there.

3. Laurence Olivier and Merle Oberon as Heathcliff and Cathy in Wuthering Heights (1939): These intense English lovers had a bond that transcended death.

4. Clark Gable and Vivien Leigh as Rhett and Scarlett in Gone With the Wind (1939): The love affair between these two rebels of the old South is one of the most dysfunctional relationships in Hollywood history.

5. William Holden and Nancy Olson as Joe and Betty in Sunset Boulevard (1950): The fearsome presence of Norma Desmond comes between these two star-crossed lovers.

1. "Somewhere Over the Rainbow" from The Wizard of Oz (1939): The most famous song in Hollywood history fully deserves its reputation.

2. "I Cried for You" from Babes in Arms (1939): The best number out of the Mickey Rooney-Garland musicals.

1. The Passion of Joan of Arc (1928): You will never forget Maria Falconetti's face as the suffering saint.

2. Beauty and the Beast (1946): Director Jean Cocteau's live-action fairytale is one of the most magical films ever made.

3. The 400 Blows (1959): Director Francois Truffaut's masterpiece about a Parisian boy's coming of age.

Turtledoves are perfectly paired for life just like these two duos.

One Rosebud in a Blazing Fire 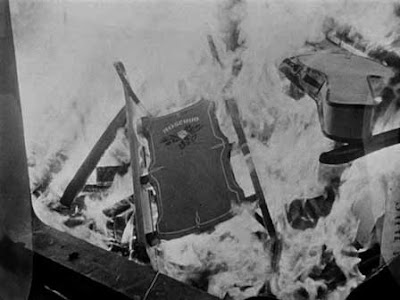 If you don't know why a child's sled in an incinerator is so important to screen history then do yourself a favor and watch Citizen Kane (1941). Director, co-writer, and star Orson Welles' masterpiece is the cinematic gift that keeps on giving (it's certainly better than a partridge in a pear tree). Not only is it one of the best films in history, it's also very entertaining, featuring great performances from a top cast, and one of the most intriguing central mysteries in films.

Happy holidays to you and your family! I hope you'll take the time to enjoy some of the movies on this list.