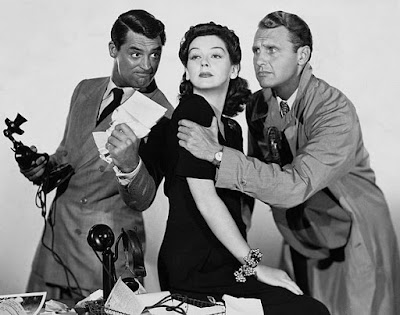 This post is part of the Try It, You'll Like It blogathon hosted by Sister Celluloid and Movies Silently. This blogathon is all about gateway movies that may be able to turn classic film skeptics into old movie fans.


I get quite a range of reactions when I tell people I have a classic movie blog. Sometimes their faces light up, and they say "(Jimmy Stewart/Doris Day/Jimmy Cagney) is my favorite actor" or "I watch (The Sound of Music/ The Wizard of Oz/ Gone With the Wind) every time it's on TV." Other times I'm greeted with blank stares or a healthy dose of skepticism. People tell me "old movies are boring" or "I don't like movies made in black and white."

Well, today I'm here to dispel those myths with one of the best comedies ever made. His Girl Friday (1940) is most definitely a black and white movie, but it is also fast-paced, hilarious, and surprisingly modern. Below, I'll give you five reasons why, even if you're not a classic movie fan, you will enjoy His Girl Friday. But, first, here's a little background.

His Girl Friday tells the story of divorced couple Walter Burns (Cary Grant), who is the hard-boiled editor of a big-city newspaper called The Morning Post, and Hildy Johnson (Rosalind Russell), the ace reporter for the Post who has decided to give up journalism for a life of domestic bliss in Albany, N.Y., with her new fiance (Ralph Bellamy). Hildy's well-made plans go awry when, at the last minute, Walter assigns her to cover the controversial execution of an accused cop killer (John Qualen).

His Girl Friday is based on the 1928 stage play by Ben Hecht and Charles MacArthur that had already been made into a 1931 movie starring Adolphe Menjou and Pat O'Brien. Director Howard Hawks switched Hildy's gender and created a romance between the two main characters, which changed this extremely funny workplace comedy into one of the great romantic classics. His Girl Friday is still as fresh and funny today as it was when it was released 75 years ago, so ,without further ado, here's five reasons why you'll love this movie. 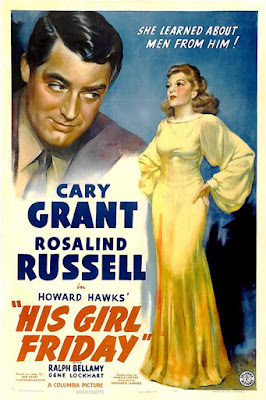 1. Cary Grant: Grant is one of the great stars of old Hollywood's golden age, and his role as the hard-charging Walter Burns is one of his very best performances. There's virtually nothing Walter won't do in pursuit of a great story, including hiring a mobster to shakedown Hildy's fiance and prospective mother-in-law. Grant sinks his teeth into the part with relish, and he is both charismatic and hilarious while pulling off outlandish scheme after outlandish scheme. Also, as you may have noticed from the photos above, he's pretty easy on the eyes.

2. The character of Hildy Johnson: I think many people believe that female characters in classic movies are delicate damsels in distress who are always waiting for the male hero to save the day. Actually, nothing could be further from the truth. Old Hollywood movies are full of strong independent women like Hildy Johnson. Russell gives the best performance of her career as Hildy, who is both an ace reporter and the best writer on The Morning Post staff. Hildy may say she longs for a quiet home and family, but she can go toe to toe with any man, including government officials, her fellow reporters, and, most especially, Walter.

3. His Girl Friday is fast-paced: Another common misconception is that classic movies are long and boring. In fact, most classic movies are quite short compared to modern movies with some great films, like W.C. Fields' comedy The Bank Dick (1940), only lasting around an hour. His Girl Friday flies by at a crackling 92 minutes thanks to a well-oiled plot, and Grant and Russell's fast-paced repartee.

4. The humor is very modern: One of the hottest trends in entertainment is edgy, self referential humor in popular shows like Unbreakable Kimmy Schmidt and Portlandia. His Girl Friday was 75 years ahead of its time with lots of snarky "in" jokes mostly provided by Grant's brilliant ad-libbing. When asked to describe Hildy's fiance, Grant says "he looks like that film star, Ralph Bellamy" and Grant makes several self-referential jokes, comparing a character to the mock turtle, a role he played in the 1933 adaptation of Alice in Wonderland, and referencing his own birth name of Archie Leach.

5. His Girl Friday is easily accessible: Some classic movies can be quite hard to find but that's not the case with His Girl Friday. It airs frequently on TCM and getTV, and it is widely available for free on many online streaming services, so you can fire up your iPad or Roku tonight and enjoy one of the best American films ever made.

His Girl Friday is available for streaming on Netflix Instant, Amazon Prime, Hoopla Digital and Hulu. You can also catch it on DVD and video on demand.