A Classic Holiday Viewing Guide for the Week of December 7, 2015 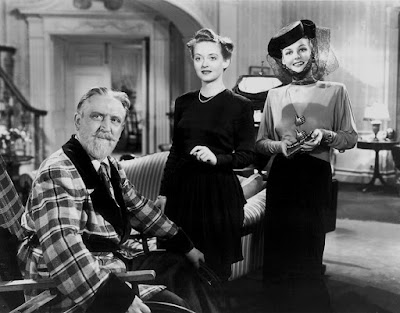 The Man Who Came to Dinner (1942) starring Monty Woolley, Bette Davis, and Ann Sheridan is one of the classic Christmas movies airing this week.


If you love classic holiday movies, there's plenty of choices this week. You can tune in to several versions of A Christmas Carol or watch holiday musicals like White Christmas (1954) and Meet Me in St. Louis (1944). TCM is even showing some holiday-themed films noir on Sunday night. Just a note: The highlighted movies have links to full-length articles.

The Perry Como Christmas Show, 9 p.m. on getTV: getTV is doing a great job of reviving some of the vintage variety shows. This 1974 show features special guests The Carpenters, figure skater Peggy Fleming, and comedian Rich Little. This show will be repeated at 2 p.m. Friday  and 10 a.m. Sunday.

The Christmas Sonny and Cher Comedy Hour, 8 p.m. on getTV: The whole Bono family gets into the act in this holiday special, which features William Conrad reciting, "Yes Virginia, There Is a Santa Claus." This show will be repeated at 4 p.m. Friday and 6 a.m. Sunday.

The Andy Williams Christmas Show, 9 p.m. on getTV: This 1966 holiday special is a family affair with Williams crooning Christmas standards like "Carol of the Bells" and "It's the Most Wonderful Time of the Year" with his then wife Claudine Longet and the Williams Brothers. This show will be repeated at 5 p.m. Friday and 7 a.m. Sunday.

The Judy Garland Show, 10 p.m. on getTV:  Garland's Christmas special features her talented children Liza Minnelli and Lorna and Joey Luft, and Mel Torme performing his signature tune, "A Christmas Song." This show will be repeated at 6 p.m. Friday and 8 a.m. Sunday.

A Christmas Carol, 10 p.m. on AMC: This 1984 adaptation of Charles Dickens' classic tale features George C. Scott as the miserly Ebenezer Scrooge. He is surrounded by a great cast of character actors, including Frank Finlay as the ghost of Jacob Marley and Roger Rees as Scrooge's nephew, Fred. This movie will be repeated at 4:30 p.m. Thursday

Nestor the Long-Eared Christmas Donkey, 11 a.m. on ABC Family: This 1977 stop-motion animation special tells the story of a misfit donkey who finds his place in the world by helping Mary and Joseph on the first Christmas.

White Christmas, 11:30 a.m. on AMC: This classic musical about a struggling inn in Vermont features Bing Crosby, Danny Kaye, Rosemary Clooney, and Vera-Ellen performing Irving Berlin tunes like "Count Your Blessings (Instead of Sheep)" and the title song. This movie will be repeated at 2:15 p.m. Friday.

The Man Who Came to Dinner, 8 p.m. on TCM: This 1942 comedy stars Monty Woolley as an acerbic New York critic who must spend Christmas with an Ohio family after he injures himself on their icy doorstep. Woolley promptly takes over the first floor of the house shouting orders, rearranging the furniture, and firing off classic lines like, "Why are you standing there like the kiss of death?"

Scrooge, 10 p.m. on TCM: This 1970 musical adaptation of A Christmas Carol features Albert Finney as Scrooge and legendary actors Dame Edith Evans and Kenneth More as the ghosts who haunt him on one fateful Christmas Eve. This movie will be repeated at 8:30 a.m. Sunday.

Meet Me in St. Louis, 1:15 a.m. on TCM: This Vincente Minnelli-directed film about a middle-class family's life in turn of the century St. Louis is one of greatest of MGM's musicals. Judy Garland introduced the holiday standard, "Have Yourself a Merry Little Christmas" in this movie.

In the Good Old Summertime, 3:15 a.m. on TCM: This is another turn of the century MGM musical featuring Judy Garland and Van Johnson as warring employees in a Chicago music shop. This is a remake of the 1940 holiday classic The Shop Around the Corner. This movie will be repeated at 10 a.m. Sunday.

A Night at the Movies: Merry Christmas!, 5 a.m. on TCM: This 2011 documentary traces the history of Christmas movies through film clips and interviews

Christmas in Connecticut, noon on TCM: Barbara Stanwyck plays a homemaking columnist for a ladies' magazine who must bluff her way through a Christmas weekend in the country to please her demanding editor (Sydney Greenstreet). This movie has become a real holiday favorite in recent years, thanks to frequent showings on TCM.

Lady on a Train, 8 p.m. on TCM: TCM is kicking off a Sunday night of holiday noirs with this unusual 1945 movie starring Deanna Durbin as a young woman who gets involved in a murder mystery involving a wealthy tycoon. Yes, Durbin does warble a few tunes, including a lovely rendition of Silent Night.

Alias Boston Blackie, 9:45 p.m. on TCM: This is a fun B movie about an innocent inmate who escapes from the big house during a Christmas magic show so -- stop me if you've heard this one before -- he can track down the real murderer. Alias Boston Blackie was part of a series of Boston Blackie movies that featured Chester Morris as a reformed jewel thief turned detective.

Lady in the Lake, 11 p.m. on TCM: Detective Phillip Marlowe (Robert Montgomery) searches for a missing woman during the holiday season in this unusual 1947 noir that was shot entirely from Marlowe's point of view.

Mon Oncle Antoine, 2:30 a.m. on TCM: This French language film is a beautiful holiday movie that doesn't get revived much these days. It is about a young boy who is growing up in a rural mining town in Quebec during a 1949 strike.

Carol for Another Christmas, 4:30 a.m. on TCM: This updated version of A Christmas Carol written by Twilight Zone auteur Rod Serling stars Sterling Hayden as an industrialist who learns the importance of the United Nations and global peacekeeping (I'm not joking) during a visitation from three ghosts played by Steve Lawrence, Pat Hingle, and Robert Shaw. The most notable thing about this TV movie is a cameo appearance by Peter Sellers as an atom-bomb loving demagogue.

Here's Judy Garland to take us out. See you next week!