What's New on Netflix for Classic Movie Fans in November 2015 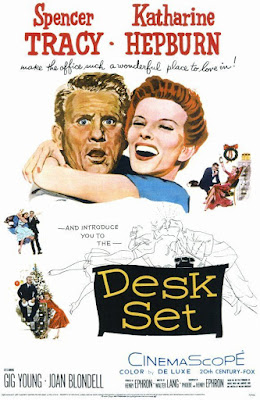 Here's the classic movies that started streaming on Netflix in November. They include the fun Tracy and Hepburn movie, Desk Set (1957).


October brought a bumper crop of classic movies to Netflix Instant (go here for the complete list). There are only a few new titles in November, but they include classic Tracy and Hepburn, an underrated war movie, and a disco classic. I will add movies and post on social media if any new titles are added during the month.

Desk Set (1957): Tracy and Hepburn were one of old Hollywood's top screen teams, and Desk Set is one of their most delightful films. Hepburn plays a reference librarian at a fictional television network who is threatened by a computer expert (Tracy) who is bringing new technology into the office. Desk Set features Tracy and Hepburn's sparkling chemistry, and a great supporting cast of old Hollywood stalwarts like Joan Blondell and Gig Young. Desk Set is also set during the holidays, so it makes a great Christmas movie for the whole family.

Harry and Tonto (1974): This road movie directed by Paul Mazursky is an underrated gem starring Art Carney (most famous as Ed Norton on The Honeymooners) as a retired teacher who takes a cross-country journey with his pet cat. Carney won the Best Actor Oscar for his touching performance, beating out heavyweights like Jack Nicholson in Chinatown and Al Pacino in The Godfather Part II. Harry and Tonto also features a stellar supporting cast, including the wonderful actress Geraldine Fitzgerald as Carney's former love interest.

Saturday Night Fever (1977): This iconic musical about a restless young man who dances away his troubles in the New York City club scene made John Travolta a star and launched disco as a national craze. The movie is still a pop culture icon, especially the Bee Gees soundtrack and the scene where Travolta takes to the dance floor in his white leisure suit.

The Enemy Below (1957): This World War II drama directed by Dick Powell stars Robert Mitchum and Curt Jurgens as a US Naval commander and German U-boat captain who are in a battle of wits on the Atlantic Ocean. The movie is based on a book about a British naval officer's experiences in anti-submarine warfare.

The Legend of Hell House (1973): Today, paranormal investigators are all over films and television, but that wasn't the case in the early 1970's.   This British movie helped launch the horror resurgence in the 1970's and the interest in paranormal investigation. The Legend of Hell House, based on a novel by Richard Matheson, tells the story of a team of researchers led by Pamela Frankin and Roddy McDowall who spend a hair-raising week in a supposedly haunted English manor house.