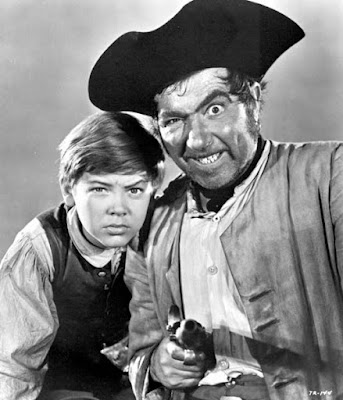 Today, I'm celebrating the 100th anniversary of the swashbuckler with an article about the Walt Disney version of Treasure Island (1950) starring Bobby Driscoll (left) as Jim Hawkins and Robert Newton as legendary pirate Long John Silver.

This article is part of the Swashathon hosted by Movies Silently.


There are few films that are as much fun as the 1950 version of Treasure Island. This movie, which was the first live action feature from Walt Disney Studios, is full of buried treasure and exotic locales, and features a scene-stealing performance from Robert Newton as the "pirate of all pirates" Long John Silver.

Treasure Island tells the story of Jim Hawkins (Bobby Driscoll), an 18th century English boy who helps his widowed mother run the Admiral Benbow Inn on the western coast of England. Through a series of mysterious circumstances, Jim becomes the owner of a pirate's map leading to buried treasure on a South Seas island. Jim joins an expedition to Treasure Island, and he becomes best friends with the ship's cook Long John Silver, a colorful character who may be a ruthless one-legged pirate. 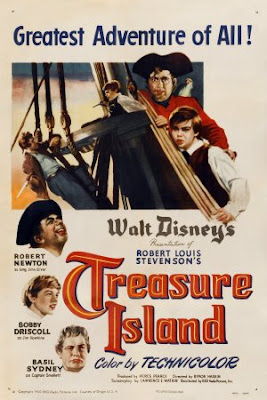 Treasure Island is based on the beloved 1883 children's novel by Scottish author  Robert Louis Stevenson. Like many writers, Stevenson was inspired by a wide variety of sources, including his own circle of friends  (Stevenson later admitted that  poet and critic William Ernest Henley, a garrulous man with one leg, was the model for Long John Silver). Stevenson also drew from real pirate adventures like the legendary buried treasure of Captain Kidd, but the story mostly sprang from his own imagination.  Stevenson began the novel by drawing the map of  the fictional Treasure Island (it is recreated in the movie) and most of the plot and characters came into his mind while he was filling in the details.

Treasure Island was a massive bestseller, which made it a prime candidate for an old Hollywood adaptation. MGM made an entertaining version in 1934 with Wallace Beery and Jackie Cooper playing the roles of Long John and Jim. Walt Disney bought the rights from MGM with an eye towards making an animated feature, but he changed his mind after his studio took a big financial hit during World War II because they could not distribute their  animated features in Europe. Disney needed some fast cash to finance new animated movies and his dream project of Disneyland, so he decided to greenlight Treasure Island as a live action movie with Disney's popular child star Driscoll in the lead.

Thanks to arcane tax laws the ever shrewd Disney also saved a great deal of money by filming  in England, although this did backfire somewhat because Britain's stricter child labor laws meant that poor Driscoll had to be shuttled about a great deal to cover up the amount of time he was actually working on the movie.

Treasure Island was filmed on location in Cornwall, Devon, and Bristol, England, which gives the movie an authentic feel.  It also gave director Byron Haskin access to wonderful British actors like Geoffrey Wilkinson, who gives a memorable, Gollum-like performance as castaway Ben Gunn, and Walter Fitzgerald, who provides comic relief as the blustery, dim-witted Squire Trelawney. The movie also greatly benefits from cinematographer Freddie Young, who would go on to collaborate with director David Lean on classic films like Lawrence of Arabia (1962). Young uses Technicolor to its full advantage, getting beautiful shots of the rocky Cornish Coast, the colorful costumes, and most memorably, a skull and crossbones flag waving against a clear blue sky.

As great as all of these elements are, the success of Treasure Island rests on the colorful shoulders of Robert Newton as the "pirate of all pirates" Long John Silver. Newton was a widely respected stage actor who dabbled in British films with memorable appearances in Jamaica Inn (1939), Oliver Twist (1948), and Odd Man Out (1947). Stevenson's novel portrays Long John Silver as one of the most charming villains in literature, and Newton performance, although it is hammy to say the least, successfully puts the audience under Long John's spell. Long John's appearance alone is memorable with his bright red coat and parrot on his shoulder, but Newton adds more layers to the character by giving Long John a bizarre squint and a unique accent. Newton drew from his own regional accent (he was from Dorset) and from seafaring terminology to create a unique argot (or should it be "argh"-ot) that became one of the most widely imitated screen performances of all time.

Treasure Island was a huge hit for Disney, and its success was followed by a series of highly successful live action films that continues today with the Pirates of the Caribbean franchise. Meanwhile, Newton's performance as Long John defined the rest of his career. He played a series of pirates until his death in 1956, and he even reprised his role as Long John Silver in a 1954 Treasure Island sequel and in an Australian TV series. In fact, Long John Silver became something of a fifties pop culture icon. Treasure Island kitsch, like the Pirates of the Caribbean ride at Disneyland, abounded, and businesses even picked up on the trend with Long John Silver's fast food restaurants and Admiral Benbow Inn's sprouting up across the country.

Newton's portrayal of Long John Silver is still a popular today, thanks to International Talk Like a Pirate Day (it's Sept. 19 if you want to mark it on your calendar), where bored office workers across the country entertain their co-workers with their best "argh's" and "ahoy there, mateys," although I think many people under 40 don't actually realize who they are imitating. I'll leave you with a clip from the Treasure Island sequel that is designed to help wannabe pirates perfect their best Newton impersonation.

Treasure Island is available on DVD and video on demand. 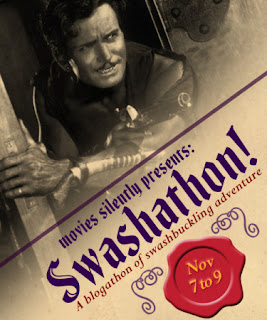 Go here for articles from my past blogathons.