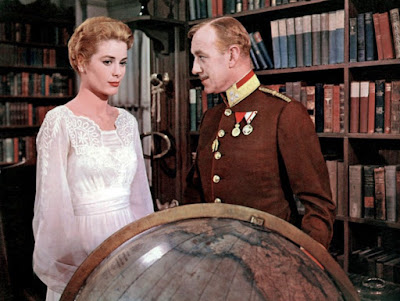 Today, I'm celebrating Grace Kelly's Nov. 12 birthday with a review of her penultimate film, The Swan (1956). The photo above shows Kelly with co-star Alec Guinness.


Grace Kelly's next to last  film, The Swan (1956) is a bittersweet fairy tale of romance and royalty that in many ways eerily predicts Kelly's future marriage to Prince Rainier of Monaco and her life as a princess in a small European country.

The Swan tells the story of an European royal family in exile. Although they have a splendid palace and a lavish lifestyle, the family's forceful matriarch (Jessie Royce Landis) is determined that they will regain the throne by marrying her beautiful eldest daughter, Princess Alexandra (Kelly), to Crown Prince Albert (Alec Guinness). When Albert stops by for an unexpected visit, he and Alexandra get off on the wrong foot. The situation then moves from bad to worse when she becomes infatuated with a dashing young tutor (Louis Jourdan). 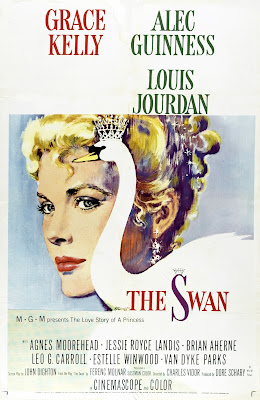 Many people are only familiar with the Kelly version, but The Swan is one of those show business chestnuts that has a long and rich history. The original version is a Hungarian farce by Ferenc Molnar that moved to Broadway in 1923 in a production that included Basil Rathbone as the tutor. A 1925 silent movie  starred Frances Howard and Adolphe Menjou, and Lillian Gish made her talking pictures debut in an updated version called One Romantic Night (1930). In fact, Kelly herself was very familiar with the material. She appeared in a stage version and a television version of The Swan early in her career.

MGM chief Dore Schary dusted off The Swan for a lavish Technicolor spectacle that would showcase Kelly's beauty and talent. Schary spared no expense for the production: The movie was filmed on location at the Biltmore House and Gardens in Asheville N.C., and the beautiful costumes were designed by Helen Rose. Kelly wears many delicate white lace costumes that are reminiscent of her wedding dress, but, in my opinion, Landis, who Rose dressed in a series of flattering Edwardian style gowns, is the fashion queen of The Swan.

The finished movie is reminiscent of a Disney animated movie come to life, especially the first half, which is largely played for comedy. Landis is hilarious as her increasingly desperate schemes to marry off her daughter backfire, while Guinness, in his first American film, steals the movie as the obtuse, fussy Crown Prince, who prefers to spend his time interacting with dairy cows and playing the bass violin rather than searching for a prospective bride.

Even though Guinness is a scene stealer, The Swan really belongs to Kelly, who gives an emotionally vulnerable performance. The movie successfully plays off of Kelly's cool blonde persona. Princess Alexandra has been raised to be a future queen, which, ironically, makes her much too dignified and unapproachable to lure potential suitors.  She is compared to an icicle and an iceberg throughout the film, but the best likeness is made by Albert in the movie's bittersweet final scene. He compares her to a swan, the most graceful and serene of  birds in the water, but one who is awkward and out of place on dry land (clip below).


Ironically, Kelly was  courting her own prince charming while making The Swan. She met Prince Rainier during the 1955 Cannes Film Festival and they began a secret correspondence that continued throughout the filming of The Swan. Ironically, the movie featured several eerie similarities to Kelly's future. Her white lace costumes are quite similar to her wedding dress, and Guinness actually looks a great deal like Rainier in this movie.  Kelly finished shooting a few days before Christmas, and she then returned to her hometown of Philadelphia for the holidays. Rainier came to visit her family, and the couple were engaged in early January 1956.

Grace returned to Hollywood to make one final movie, High Society (1956), before sailing off to Monaco to marry her prince on April 18, 1956. In many ways, The Swan sailed with her. Schary, no doubt thrilled with all of the free publicity, delayed The Swan's premiere until Kelly's wedding day. Also, Kelly's elegant Alencon lace wedding dress was designed by Rose, and MGM hair and makeup artists were on hand to make sure Kelly looked movie star perfect on her wedding day.

Even today, watching The Swan is the next best thing to attending a royal wedding with plenty of pageantry  and beautiful costumes, plus Kelly's serene presence in one of the best movies of her career.

The Swan is available on DVD and video on demand. 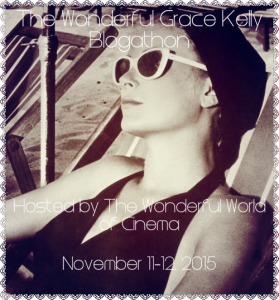 Click here for a link to my past blogathons.