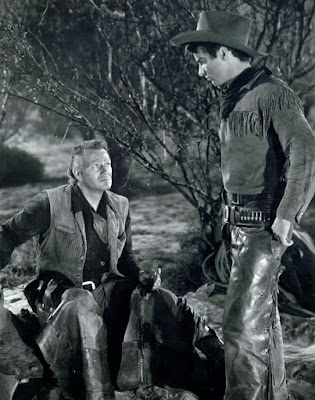 This article is part of the Criterion Blogathon  hosted by Criterion Blues, Speakeasy, and Silver Screenings.

Here's a gentle reminder that this review contains spoilers.


In postwar America, there were two types of Hollywood movies that reflected the turmoil of the atomic age. The first was film noir, while the second was the Western, a genre that transformed itself from Saturday matinee shoot 'em ups into a series of adult films that mirrored American's conflicted attitudes about race, nuclear war, and American imperialism. One of the best of these films is director Howard Hawks' Red River (1948), a timeless tale of patriarchy and generational conflict set on the Western plains.

Red River tells the story of cattle rancher Thomas Dunson (John Wayne). After his sweetheart (Coleen Gray) dies in an American Indian raid, he becomes a hard and bitter man,  only concerned with expanding his livestock empire along the Rio Grande. When the southern cattle market drys up after the Civil War, Dunson decides to blaze a new cattle trail to Abilene, Kan., where Dunson believes he can open up a profitable new market for his  beef. What he doesn't know is that the long, hard journey north will deplete his livestock, and that his authoritarian leadership style will alienate his men and lose him the respect of his adopted son, Matthew Garth (Montgomery Clift).

Red River is based on a Saturday Evening Post serial novel by Borden Chase called "Blazing Guns on the Chisolm Trail" (Chase's other Western tales would inspire three great Anthony Mann-James Stewart Westerns: Winchester '73, Bend in the River, and The Far Country). Hawks, who was already a highly successful director of screwball comedy (His Girl Friday), gangster films (Scarface: The Shame of the Nation) and film noir (To Have and Have Not, The Big Sleep) decided to use Chase's timeless story as the basis for his first Western.

Red River is the most visually stunning of all Hawks' films. It was partly filmed on location in Elgin, Ariz., and Hawks, assistant director Arthur Rosson, and cinematographer Russell Harlan crafted a beautiful film that created archetypal Western imagery. The most memorable sequence is the stampede scene, which has been widely imitated but whose raw power has rarely been equaled. In fact, the stampede and many of the other outdoor scenes were directed by a second unit helmed by Rosson, while Hawks worked with the principal actors on a Hollywood sound stage ( Hawks generously gave Rosson a co-directing credit for Red River).

Hawks had a little bit of trouble getting the right cast for Red River. He originally wanted Jack Buetel, who was so memorable as Billy the Kid in Howard Hughes' The Outlaw (1943), as Garth, but the ever suspicious billionaire wouldn't let the young actor out of his contract. Hawks then settled for Clift, an untested method actor who had impressed the director when he saw Clift on Broadway. Hawks had an equally difficult time finding the perfect Dunson. He wanted his old buddy Gary Cooper, but the actor refused to play a character that might damage his nice guy persona.

Wayne was also reluctant to play the vindictive rancher, but Hawks finally convinced him by telling the prestige hungry star that he would win an Academy Award for Red River ( for the record, Wayne wasn't even nominated). Even without a trunk full of trophies, Wayne gives one of the most remarkable performances in American cinema. In many ways, it is Wayne's compelling portrayal of one man's obsession that is the driving force in Red River. Hawks pursues his trademark fascinations with male bonding, husky voiced women (in this case Joanne Dru, who plays seductive card sharp Tess Millay) and casting Walter Brennan in everything (he is in full, "gul-durn it" mode in Red River), but all of these things are pushed to the sidelines by the sheer power of the towering figure of Thomas Dunson. Wayne's performance is so monumental that Dunson becomes a mythic American figure, and Wayne was ever after the de facto symbol of American masculinity and authority. Even more than 30 years after his death, Wayne is still  a powerful symbol of a certain type of patriotism, at least here in the Midwest, where his movies regularly sell out at Walmart, and John Wayne wall clocks are still prized possessions. 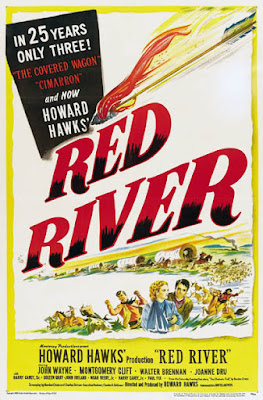 Wayne could never quite escape Red River throughout his legendary career. In his best films, he often played versions of Dunson; sometimes, he was more benign, like the strong but sentimental Capt. Nathan Brittles in She Wore a Yellow Ribbon (1949), while sometimes he was troubled, like rancher Tom Doniphon in The Man Who Shot Liberty Valance (1962).  He only surpassed his performance in Red River once: Wayne recreates the Dunson character as the Indian hunter Ethan Edwards in director John Ford's masterpiece, The Searchers (1956).

Red River ends not with a bang, but with a whimper. In a change from the source material, Dunson and Garth are persuaded to lay down their blood feud after a stern talking to from Tess. The trio ride off into the sunset where presumably Tess and Garth will marry, and Dunson will become a doting grandfather to their passel of children. This seems as likely a turn of events as any other -- Hawks' movies were never exactly cinema verite -- but I've always wondered what would have happened to Dunson once the credits roll. Would he settle down to a life of domestic bliss, or would he set by the fire plotting and planning until one day he would have his vengeance?

Red River is available on DVD and Blu-ray from the Criterion Collection. My sources for this article are John Wayne: The Life and Legend by Scott Eyman and The Western: The Complete Sourcebook by Phil Hardy. 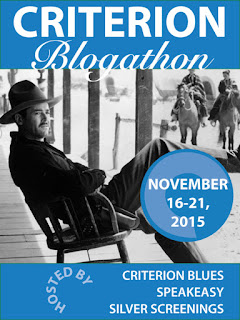 Go here, for articles from past blogathons I have participated in.