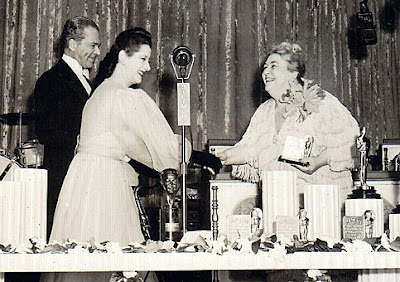 
The 1940 best supporting actress Academy Awards featured two of the best performances in 1940's cinema. Jane Darwell, who won the Oscar, was the heart and soul of The Grapes of Wrath as the indomitable Ma Joad, while Judith Anderson, as the icy Mrs. Danvers in Rebecca, created a villain for the ages. The category was rounded out by Ruth Hussey's snappy performance as a tabloid photographer in The Philadelphia Story; Barbara O'Neil's turn as a jealous wife in All This, and Heaven Too, and Marjorie Rambeau's touching performance as a fallen woman in Primrose Path. Here's a clip of Lynn Fontanne giving Darwell her much deserved Oscar for the newsreel cameras (they had to do it three times to get it right).

Darwell was a popular character actress throughout the 1930's appearing in many Shirley Temple films and as the gossipy Mrs. Merriwether in Gone With the Wind (1939). Director John Ford gave her the role of a lifetime as the matriarch of the Joad clan, a family of dirt poor Oklahoma farmers who are struggling to make a living during the Dust Bowl. Darwell conveys Ma's heartbreak at the family's circumstances, but she also embodies an inner strength that is contained in her final speech in The Grapes of Wrath:  “We’re the people that live. They can’t wipe us out, they can’t lick us. We’ll go on forever, Pa, cause we’re the people.” 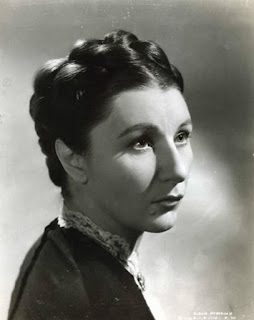 While most people wouldn't argue with Darwell's win, Australian actress Anderson is just as an incredible as the villainous Mrs. Danvers in Rebecca. Anderson was a successful stage actress in London when director Alfred Hitchcock cast her to play the wily housekeeper of the stately Cornish estate of Manderley. Mrs. Danvers does everything she can to undermine the second Mrs. de Winter (Joan Fontaine), and her obsession with her former mistress Rebecca has dark undercurrents that weren't usually conveyed in forties films.


Like Darwell, O'Neil was another Gone With the Wind veteran who got a stellar role thanks to her part in the epic film. In All This, and Heaven Too, O'Neil plays an unstable French noblewoman who is insanely jealous of her children's governess (Bette Davis). All This, and Heaven Too is a good, old-fashioned melodrama, and O'Neil plays her part to the hilt with nostrils flaring and eyes flashing while she concocts a series of devious schemes to ruin the governess. O'Neil isn't in the same league as Darwell and Anderson, mostly because everyone in All This, and Heaven Too is very melodramatic, but she  gives a wonderful performance that still delights classic movie fans who love a good soap opera.


Rambeau was the dark horse in 1940. She is excellent as the matriarch of an impoverished Monterey, Calif., family who keeps food on the table by working as an escort for rich men. Rambeau is desperate that her teenage daughter (played by Ginger Rogers in one of her first dramatic roles) not follow in her footsteps. However, when Rogers' upstanding husband (Joel McCrea) begins to have suspicions about the his mother-in-law's background, things start to go awry. Rambeau, who was a widely respected stage actress who also appeared in supporting parts in silent and sound movies, gives a nuanced performance as a basically fun-loving woman who still yearns for a better life for her daughter. 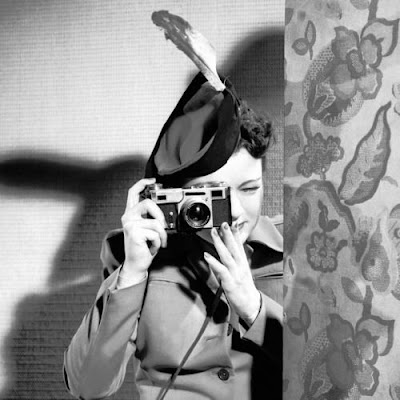 Hussey was one of old Hollywood's most reliable actresses, and she received her only Oscar nomination for playing a wisecracking photographer in The Philadelphia Story. Hussey is great, especially in the first half of the movie, but she has less screen time than the other actresses -- in fact, Darwell has so much screen time that she's almost a lead -- and her character really doesn't have that much to do except make wisecracks and pine for a tabloid reporter (James Stewart, who won the best actor Oscar) who is infatuated with heiress Tracy Lord (Katharine Hepburn). Still, she is wonderful in the part, and it's always nice to see a comic performance receive Academy recognition.