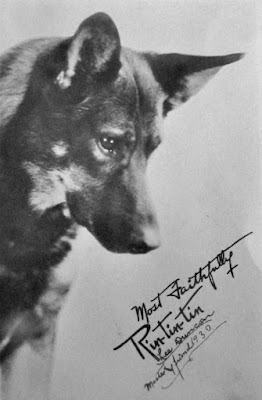 Today, I'm writing about the silent film career of one of old Hollywood's great canine stars, the original Rin Tin Tin. Here's Rinty in one of the many signed autographs that were distributed by his owner, Lee Duncan.

This article is part of The Silent Cinema Blogathon hosted by In the Good Old Days of Classic Hollywood and Lauren Champkin.


Silent cinema is filled with many legendary careers, but it's hard to top the rags to riches story of Rin Tin Tin. This handsome and keenly intelligent German shepherd rose from poverty in wartime France to become one of the great stars of the silent era with a legion of devoted fans that  rivaled  Rudolph Valentino and Greta Garbo. Rinty, as he was affectionately nicknamed by his owner Lee Duncan, was a top box office draw in the 1920's and early 1930's until he passed away at the ripe old age of 14.

Rin Tin Tin's story began in 1918 when Duncan, a corporal in the U.S. Army Air Corps, arrived in the bombed-out village of Flirey, France, during World War I. Duncan was there to scout out locations for a temporary air field, but the animal lover spotted a heavily damaged German Army kennel during his reconnaissance. When Duncan went inside to investigate, he found that one male and one female German Shepherd puppy were the only survivors. Duncan adopted the orphaned dogs, naming them Rin Tin Tin and Nanette after popular French children's dolls. 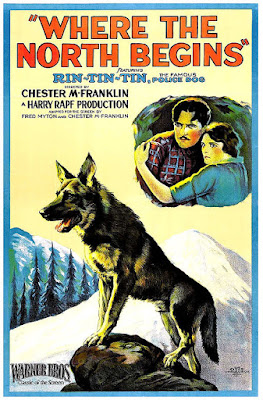 Duncan brought Rin Tin Tin and Nanette to the US after he was discharged from the army in 1919. Nanette died from pneumonia soon after their arrival in New York, so Duncan and Rinty got on a train and headed for the bright lights of Hollywood where Duncan believed that Rin Tin Tin, who was highly intelligent and easily learned complicated tricks, could become a major star. "I was so excited over the motion picture idea that I found myself thinking of it night and day," Duncan later wrote.

Duncan's cross country trek sounds slightly foolhardy in 2015, but Hollywood was very different in the silent era. Animal stars of all kinds were major box-office draws, especially in the 1920's, with legions of devoted fans packing movie houses and eagerly reading about their idols in gushing fan magazine articles. There were plenty of dog actors of course -- another German Shepherd, Strongheart, was a fan favorite -- but Hollywood had stars from throughout the animal kingdom. There was Anna Mae the elephant (you'll remember her from Gunga Din) and Pepper the Wonder Cat, a stray who wandered into Mack Sennett's studio where she promptly became a big star in his comedy shorts, until one day, in true feline fashion, she disappeared never to be heard from again.

Duncan and Rinty knocked on the doors of every old Hollywood studio, but at first, Rinty could only get a job as an extra, where he mostly played wolves. Silent movies featured many wolf attack scenes and directors soon learned that using real wolves was dangerous so German Shepherds were often substituted.

Duncan and Rinty got their big break in 1922 when Darryl Zanuck, then a screenwriter at the fledgling Warner Bros. studio, spotted Rinty's potential. He realized the dog had a great deal of appeal, especially for a children's audience. Rin Tin Tin's first feature, Where the North Begins (1923), set the template for Rinty's silent movies: It was a fast-paced action movie that featured Rin Tin Tin as a dog who is raised by wolves in the Canadian wilderness until he saves a fur trader from certain death.

Where the North Begins was a smash hit, and Rinty was well on his way to stardom. Rinty's appeal was much greater than other canine stars because his repertoire of tricks was so much better. In fact, Rinty was something of a method actor among dogs. His ability to portray a range of emotions reportedly almost earned him the first Oscar for best actor. There's a lot of myths surrounding this tale, but some sources say Rin Tin Tin got more votes than eventual winner Emil Jannings, but the academy swept it under the rug because they didn't want to award a canine performer. This clip from Clash of Wolves, which features Rinty as a wolf who must seek human assistance for a thorn in his paw, shows the full range of Rinty's skills.

Rin Tin Tin was such a huge star that he was known around the Warner's studio as the "mortgage lifter" because Rinty's movies were largely responsible for making the studio solvent. Penny-pinching studio chief Jack Warner, who had many a run-in with his human stars, always loved Rin Tin Tin. "He never asked for an air-conditioned dressing room," Warner fondly recalled. Rinty was also a popular fan magazine staple -- he often posed with his "wife" and puppies, -- and Rinty had an enviable line of endorsements that raked in the cash.

Rin Tin Tin continued  to make movies in the sound era, although Warner's new gangster stars, James Cagney and Edward G. Robinson, soon eclipsed Rinty at the box office. Rinty passed away on Aug. 10, 1932, at his home in the Hollywood Hills. He and Duncan were playing ball when the 14-year-old suddenly collapsed. Actress Jean Harlow, who was Rinty's neighbor and owned one of his puppies, reportedly rushed to the scene, but by then it was too late. Duncan had Rinty buried in a bronze casket and he was laid to rest in a pet cemetery in Asnieres sur Siene, France.

Duncan continued Rin Tin Tin's legacy with other German Shepherds, most famously with the popular fifties TV series, The Adventures of Rin Tin Tin. However, no one ever replaced the original Rin Tin Tin in his heart. I'll leave you with a poem written by Duncan about his canine friend and a story about Rin Tin Tin from CBS Sunday Morning program.

Rin Tin Tin I so often watch you stand;
Eager to serve me for that high reward-
A smile, or just a light touch of my hand.

Deaf to allurements of those standing by
when I am near, and deaf when I'm away.
Forever overjoyed at my return
However brief or lengthy is my stay.

Believing in me always, tho I fail,
Your trust you gave but once, and that to me.
Your's are the qualities that men hold high,
Strength and pride and love and loyalty.

Wherever led my path you'd walk my way.
And gladly give your life my own to save.
Enduring pain and hunger, heat and cold-
And broken hearted die upon my grave.

A real unselfish love like yours, old pal,
Is something I shall never know again;
And I must always be a better man,
Because you loved me greatly, Rin Tin Tin

The sources for this article are Silent Stars by Jeanine Basinger and Rin Tin Tin by Susan Orlean. 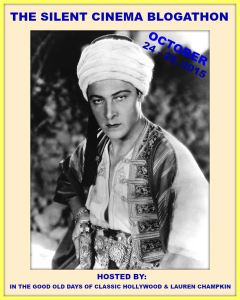