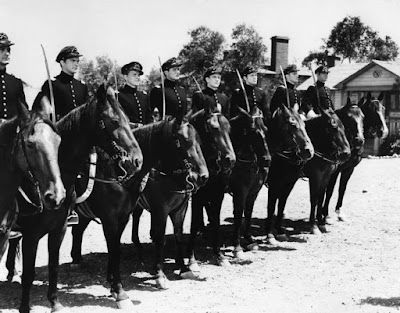 Santa Fe Trail (1940) is one of the most unusual old Hollywood Westerns. It's billed as an exciting action-adventure starring the screen team of Errol Flynn and Olivia de Havilland, but it is also a buddy movie and a historical drama featuring leading Civil War figures like abolitionist John Brown, and Confederate generals Robert E. Lee and J.E.B. Stuart. Here's what you need to know about one the biggest box-office hits of 1940

Source Material: Santa Fe Trail is a wildly inaccurate portrayal of historical characters and events leading up to the Civil War.

The Plot:  West Point graduates and best friends J.E.B. Stuart and George Custer (Flynn and Reagan) head out to the Kansas frontier to quell the violence between pro-slavery forces and abolitionists led by the firebrand, John Brown (Raymond Massey). Along the way, the two cavalry officers clash with a disgruntled colleague (Van Heflin) and romance the daughter (de Havilland) of a railroad executive (Henry O'Neill).

Backstory: Westerns were mostly B movies until 1939, when several big budget horse operas, including the Flynn/de Havilland vehicle Dodge City, became hits. Warner Bros. wasn't going to pass up on a winning formula, so they quickly re-teamed Flynn and de Havilland with director Michael Curtiz for another all-star Western.

Best Performance: Raymond Massey as John Brown. Santa Fe Trail was designed to be a rip-roaring action movie, and that's exactly how Curtiz directs it, but the always professional Massey turns in a great performance as Brown, a radical abolitionist whose violent attempt to take over a federal armory led to the start of the Civil War. Massey was known for his detailed portrayal of historical characters (his best known performance is as the future Great Emancipator in Abe Lincoln in Illinois), and he is especially fine as Brown. He effectively portrays both Brown's zeal to end a terrible institution, and his madness and love of violence.

Best scene: Brown's hanging is quite faithful to history. The speech Massey gives are Brown's own words, although they were written in a letter and not spoken on the gallows.

Best Line: "I, John Brown, am now quite certain that the crimes of this guilty land can never be purged away but with blood," An actual quote from Brown that was used in the movie.

Historical Accuracy: Most of the old Hollywood studios trampled on historical accuracy when it suited them, but Santa Fe Trail is wildly inaccurate even by those standards. Stuart and Custer never served in the cavalry toghether; in fact, they graduated in different classes and probably never actually met. The movie does better in portraying the events surrounding Brown, but they give him many more followers than he actually had (Brown basically took the armory with his sons and a few hangers-on) and Heflin's character never existed.

Reagan: Reagan was a last minute addition to Santa Fe Trail. He was assigned to play Custer after his performance as George Gipp in Knute Rockne, All American attracted considerable attention. In his autobiography, Reagan remembered a harried studio tailor arriving at his dressing room and quickly re-sewing the cavalry uniform to fit Reagan. "It occurred to me then that it would be just as easy someday to throw my clothes in a corner and hang some other actor's in their place," he said.

My take: Santa Fe Trail is my least favorite of the Flynn/De Havilland movies. The duo were best suited to swashbucklers like The Adventures of Robin Hood (1938), but this movie also suffers from its wild historical inaccuracies and outdated attitudes about civil rights. Still, it is a breezy movie that is best watched for Massey's remarkable performance and Curtiz' expert staging of the action sequences.

This article is part of my series about 1940 in film.