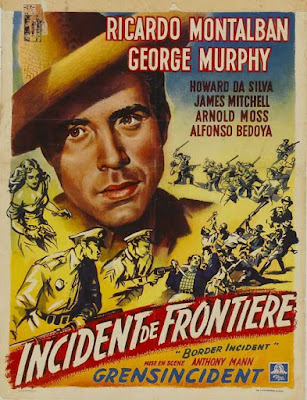 This article is part of Hollywood's Hispanic Heritage Blogathon hosted by Once Upon a Screen.


Border Incident, a classic film noir directed by Anthony Mann, is perhaps more relevant today than when it was originally released in 1949. The movie is a first-rate thriller about illegal immigration and human trafficking along the U.S.-Mexico border, and its compassionate depiction of those who are caught up in a corrupt system makes Border Incident one of the most progressive of old Hollywood films.

Border Incident is a pseudo-documentary concerning two federal agents: American Jack Bearnes (future US Senator George Murphy) and Mexican Pablo Rodriguez (Ricardo Montalban), who are assigned to an undercover investigation of illegal immigration along the Mexico-California border. While Rodriguez works among the braceros, or migrant workers, who are being illegally transported along the border, Bearnes goes undercover into a human-trafficking organization that traps the braceros into a system of modern slavery.

MGM made Border Incident during a period of cost-cutting at the studio. MGM chief Louis B. Mayer preferred wholesome, but expensive Technicolor musicals like those Montalban made with swimming sensation Esther Williams, but MGM shareholders weren't happy with the bottom line, so producer Dore Schary was brought in to do a little budget slashing (Schary would eventually oust Mayer as studio chief ). Mann and cinematographer John Alton's work on two cheaply made, but fantastic films noir for the poverty row studio Eagle-Lion caught Schary's attention, and he invited them to move over to MGM for their next project, an original story about illegal immigration.

While MGM gave Mann access to better actors (he never would have been able to get big name stars like Murphy and Montalban, let alone the excellent supporting cast at Eagle-Lion), that didn't mean there was a bigger budget for the actual film. Border Incident was shot as a B picture in the studio and on location in Mexicali, Mexico, and Calexico and El Centro, Calif. The sparse sets and bare bones budget meant that both Mann and Alton had to rely on camera and lighting tricks to keep the film visually interesting. The result is a beautifully composed movie filled with exciting moments like a harrowing scene with a combine tractor (you will never look at farm machinery the same way again) and the hair-raising finale in a quicksand swamp.

Border Incident was part of a postwar trend of south-of-the-border noirs that included Out of the Past (1947), The Treasure of the Sierra Madre (1948), and Kansas City Confidential (1952). While those other films concern the adventures of Americans in exotic locales, Border Incident puts the Hispanic characters front and center. The lead role is Montalban's heroic federale, but the movie deals with a wide variety of Hispanic characters from the poor family man (James Mitchell) who is forced to cross the border to support his wife and children to a pair of oily villains (Arnold Moss and Alfonso Bedoya) who take advantage of their desperate countrymen.

Mann certainly deserves praise for allowing Hispanic actors to play Hispanic roles (Hollywood often cast white actors for Hispanic leads a la Charlton Heston in Touch of Evil). Montalban played a wide variety of characters during his long career, but he is never better than in Border Incident as an admittedly "soft" man, who learns hard lessons while living among the braceros.

In fact, Border Incident, much like John Ford's masterpiece The Grapes of Wrath (1940), is a compelling portrait of those on the outer edges of American society. While the earlier film concerns the "Okies" who migrated to California during the Great Depression, both movies focus on those groups who are sometimes viewed as less than human. The migrants are referred to as "not human like the rest of us" in The Grapes of Wrath, while in Border Incident the disdainful smugglers repeatedly call the braceros "monkeys." 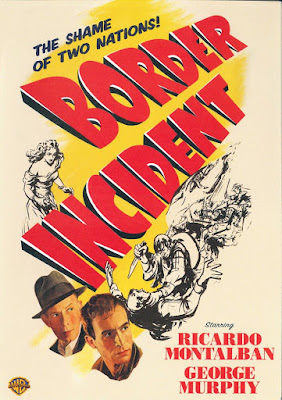 In some ways, Border Incident goes even further than The Grapes of Wrath in its plea for tolerance. The movie's tagline is "the shame of two nations," -- a deliberate echo of the 1932 gangster movie Scarface: The Shame of the Nation -- and Border Incident provides an even-handed take on a hot button issue. The movie certainly doesn't demean the braceros as thugs and criminals, and it doesn't blame them for their difficult situation. Remarkably for a mainstream Hollywood movie that was made 65 years ago, Border Incident places some of the blame for the immigration problems on greedy Americans who are looking for cheap labor, and excessive bureaucratic red tape that prevents hardworking people from making an honest living in the US. Border Incident ends with a plea for a tolerant, compassionate solution to the illegal immigration situation. Sadly, it still eludes us today.


Border Incident is available on DVD, Blu-ray, and video on demand.

Go here, for articles from past blogathons.