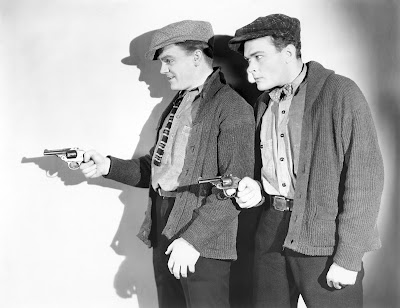 This article is part of the William Wellman Blogathon hosted by Now Voyaging.


Life was full of disappointments for avid moviegoers in 1931. Since the arrival of sound technology in 1927,  the fluid camera movements and expressive acting style of silent movies were replaced by crude techniques mandated by the bulky sound cameras. The new equipment forced actors to enunciate their lines while standing in cavernous sound stages, resulting in a style that was both extremely boring and technically inadequate for an art form that requires movement and light.

Enter maverick director William Wellman. His seminal gangster film, The Public Enemy, not only made sound movies a viable commercial option for old Hollywood studios, it revolutionized the entire movie industry. The Public Enemy moved sound movies out of the stuffy drawing rooms of the upper crust and into the mean streets of urban violence, populated by fast-talking gangsters and their bleach-blonde molls. 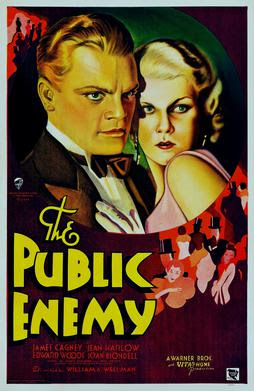 Of course, The Public Enemy isn't the first old Hollywood gangster film. George Bancroft was a huge gangster star in silent movies like the original The Wolf of Wall Street (1929), and Little Caesar (1930), starring Edward G. Robinson as an Al-Capone type crime boss, set the mold for the gangster genre six-months before The Public Enemy's release. However, The Public Enemy moves beyond those previous films by creating a new style of screen acting embodied by the ferocious brilliance of James Cagney, and a type of black and white cinematography that is a forerunner to film noir.

The Public Enemy follows best friends Tom Powers (Cagney) and Matt Doyle (Edward Woods) who embark on a life of crime while they're still boys. The duo are mostly small-time thugs -- shoplifting watches and knocking over fur warehouses -- until the start of Prohibition. Tom and Matt become prosperous beer bootleggers, and soon they are spending their ill-gotten gains on fancy suits, fast cars, and even faster women (Mae Clarke, Joan Blondell, and Jean Harlow).

The Public Enemy is based on an original story from journalists John Bright and Kubec Glasmon, who also wrote the screenplay with Harvey Thew. Many incidents come from Bright and Glasmon's time covering the Chicago mafia during Prohibition, including the infamous grapefruit scene, which was based on a gangster who once allegedly shoved an omelet into the face of his talkative girlfriend ( there are actually quite a few grapefruit origin stories, including one that gives the inspiration to Wellman, and another that says Cagney ad-libbed the gesture).

Whatever the truth behind the grapefruit story, Cagney almost never had the chance to do any citrus-shoving. He was still a relatively unknown bit player at Warner's when producer Darryl Zanuck cast him in the sidekick role with the debonair Woods in the lead. After a few days of shooting, Wellman realized that the two men were miscast, and he switched their parts, paving the way for Cagney to give one of the greatest performances in old Hollywood history.

Cagney certainly deserves a great deal of credit for the success of The Public Enemy. The movie's impact would be considerably lessened with Woods in the lead, but it's important to remember that it was Wellman who spotted Cagney's skills and lobbied hard to get him as the lead. Also, Wellman had enough courage to let Cagney be Cagney, which resulted in a performance of such unbridled insolence and rage that it can startle audiences in 2015. Cagney's anti-social and, quite frankly, psychopathic behavior must have been a huge shock for thirties audiences who were used to more demure behavior from their movie idols.

A new type of sound technology also freed Wellman from the constraints of the sound stage. He was able to shoot outdoors on the Warner's back lot, and he also uses distinct camera angles to tell his story. The Public Enemy is shot in a realist style (the newspaper headlines and intertitles are meant to evoke a documentary), but Wellman frequently moves the camera to get stylish and unexpected camera angles; even in simple scenes like two boys running from police, he gets this fantastic escalator shot (GIF below).

Finally, The Public Enemy's piece de resistance is the famous sequence where Tom, seeking revenge, stalks a rival gang on the rain-soaked streets. Wellman and cinematographer Dev Jennings achieve a nighttime cinematography of shadows and fog that is the equal of any of the celebrated shots of film noir. Their groundbreaking work has been endlessly imitated since, not only in crime movies, but in films as diverse as the classic musical, Singin' in the Rain (1952) and Wong Kar-wai's martial arts masterpiece, The Grandmaster (2013).

The Public Enemy is available on DVD and video on demand.