The Great Movies: The Bank Dick 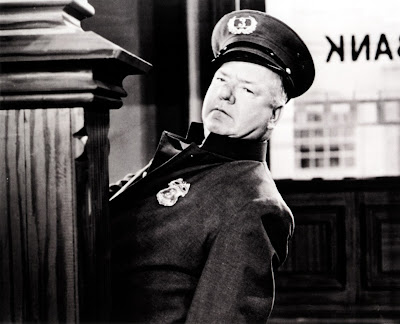 Today I'm celebrating W.C. Fields' 100th anniversary with a look at his 1940 film, The Bank Dick. This classic comedy will air at 8 p.m. tonight on TCM.


All of the great comedians of old Hollywood's golden age had their own distinct personas. The Marx Brothers were bringers of anarchy to polite society, Buster Keaton was a stoic who withstood all of life's trials with his great stone face, and Charlie Chaplin was the innocent Little Tramp. Even among these wildly diverse personalities, W.C. Fields stands out.

Fields, with his wide girth and nasal twang, was certainly the most unusual of old Hollywood movie stars. He got his start as a juggler and acrobat in vaudeville, and he worked in the Ziegfeld Follies for several years. Fields began making his vaudeville sketches into short movies in 1915 (TCM is celebrating the 100th anniversary of his film debut tonight), and he was a popular comedy star, first at Paramount Pictures and then at Universal Studios, where he made The Bank Dick in 1940.

The Bank Dick features Fields as Egbert Sousé ("accent grave on the 'e'") as the most colorful resident of the small town of Lompoc, Calif. Fields is relentlessly nagged by his wife (Cora Witherspoon), mother-in-law (Jessie Ralph) and two daughters (Una Merkel and Evelyn Del Rio) for his layabout ways and bad habits like smoking in his bedroom and drinking too much at the Black Pussy Cat Cafe (proprietor, Shemp Howard). Sousé stumbles into gainful employment when he literally falls on top of a fleeing bank robber after having one to many at the Pussy Cat. The grateful bank manager (Pierre Watkin) gives him a job as a security guard -- in forties parlance a "bank dick" -- and hi-jinks ensue as Sousé ineptly inserts himself in the bank affairs and the lives of its employees.

The Bank Dick was Fields' third film for Universal. He was one of the great pre-code comedy stars, but a health scare due to his heavy drinking kept him off the screen for a few years. Fields gained renewed popularity through his radio broadcasts with ventriloquist Edgar Bergen, and Universal Pictures gave him a contract to continue his rivalry with Bergen on the big screen in You Can't Cheat an Honest Man (1939).

That movie and his next film, My Little Chickadee (1940) co-starring Mae West, were big hits, so Universal allowed Fields to make a film where he was in complete control. Fields wrote the script under the pen name Mahatma Kane Jeeves and he chose all of his co-stars, which included his frequent screen nemesis Franklin Pangborn as a snooty bank examiner.

The Bank Dick has all of the hallmarks of Fields' screen style. First, there's the episodic nature of the plot. The movie whizzes by at a brisk 72 minutes, but the plot is a really a series of 10 to 20 minute comedy sketches -- Sousé directs a movie; Sousé leads the police on a car chase --  that are strung together like a series of vaudeville sketches with the only link being Fields' character.

The Bank Dick also capitalizes on Fields' gift for verbal humor and word play. Many of the characters have unusual names: Sousé is a synonym for drunk, and the tongue-twisting names of the bank examiner  (J. Pinkerton Snoopington ) and the gangster (Repulsive Rogan) reveal their character traits. Fields, who spoke with a nasal twang that is somewhere between a Philadelphia accent and mumblecore, also used a distinct vocabulary to create his comic persona. When he is trying to convince his  future son-in-law (Grady Sutton) to invest in some dicey mining shares, he tells the timid young man, "Don't be a luddy duddy! Don't be a moon calf! Don't be a jabbernowl!"

Finally, Fields uses his distinct comic persona to create a memorable character. Fields' screen characters usually range somewhere from straight-up con men to neglected husbands. Sousé falls more on the hen-pecked scale with a small side of con man thrown in. Sousé loves to brag about his daring exploits, and he shamelessly gives terrible advice to several people, but somehow it all works out in a happy ending (at least for a Fields' movie).

Fields' took on one more major role in Never Give a Sucker an Even Break (1941) before illness and studio interference sidelined his career. Fields died on Christmas Day 1946 from a stomach hemorrhage.

This is the first in a series of articles about the films of 1940. Go here for more of what's coming up.