The Bad and the Beautiful 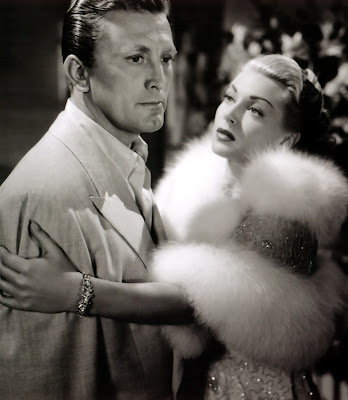 Today, I'm celebrating TCM and old Hollywood movies with a look at The Bad and the Beautiful (1952), starring Kirk Douglas and Lana Turner.

This article is part of the TCM Discoveries Blogathon hosted by The Nitrate Diva.

Through the years, I've discovered many great movies on TCM. I first watched The Passion of Joan of Arc (1928) on Silent Sunday Nights and The Manchurian Candidate (1962) on The Essentials, and I discovered the greatness of  James Cagney through Robert Osborne's picks. But for the purposes of this blogathon, I decided to write about The Bad and the Beautiful, a 1952 film about the old Hollywood studio system that I first caught on TCM on a snowy winter evening. Note: This review does contain some spoilers.

Hollywood has been making movies about the movie industry almost as soon as the first director yelled, "Action!" The inside Hollywood movie usually falls into two types: the "Hooray for Hollywood" genre about some talented young thing who through hard work and perseverance becomes a star, or a jaded expose about the madness that fame leaves behind, embodied by Norma Desmond's unforgettable walk down the staircase in Sunset Boulevard (1950). 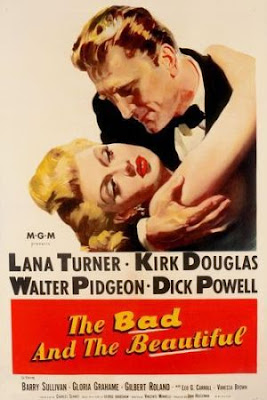 The Bad and the Beautiful, wonderfully directed by  Vincente Minnelli, and featuring bravura performances from Kirk Douglas, Lana Turner, and Dick Powell, straddles the two types of Hollywood films. The Bad and the Beautiful certainly has a veneer of cynicism -- it is often placed among films noir, and MGM's publicity department marketed it as a Hollywood expose -- but all of the low-key lighting, distorted camera angles, and moody acting can't hide the fact that The Bad and the Beautiful is really a celebration of the glories of the old Hollywood system. Sure, powerful producer Jonathan Shields (Douglas) is a Type A personality who casts extras at his own father's funeral, but his obsessions also lead him to make blockbuster after blockbuster, which, in Hollywood, is about the best endorsement of character there is.

The Bad and the Beautiful tells Jonathan's story in flashbacks narrated by three people who knew him well, and now, for very different reasons, loathe him. At the beginning of the movie, Shields' former film making partner, Fred Amiel (Barry Sullivan), his former leading actress, Georgia Lorrison (Turner), and his former screenwriter, James Lee Bartlow (Powell), are being coaxed to make a new movie with the now washed up producer by fatherly studio chief Harry Pebbel (Walter Pidgeon). Each in turn, lays out their case for refusing to work with Jonathan: For Fred, it's because Jonathan dumped him when he hit the big time; for Georgia, it's because their love affair went sour, and for James Lee, it's because Jonathan caused the death of his beloved wife (Gloria Grahame).

The Bad and the Beautiful is based on a 1951 short story, "Memorial to a Bad Man," by George Bradshaw, which tells the story of a powerful Broadway producer who steamrolls over everyone in his path. Minnelli changed the setting from New York to California, and speculation on which real life person each character was based on became a popular Hollywood parlor game. For the record, Jonathan is probably based on David O. Selznick with a dash of Orson Welles, while Georgia is a mash-up of John Barrymore's daughter Diana, Judy Garland and Turner herself.  There are also cameos from a Hitchcock-like director (Leo G. Carroll), and a suave movie star (Gilbert Roland) who parodies MGM's stable of Latin lovers.

The key difference between Citizen Kane and The Bad and the Beautiful is that it offers Jonathan a chance at redemption and even forgiveness for his many misdeeds. Jonathan, who is brilliantly played by Douglas in a performance brimming with manic energy, seduces everyone around him, and by extension the audience, with his pure love of cinema. At the end of the movie, the avuncular studio chief basically exonerates Harry for everything from extreme callousness to involuntary manslaughter because he did it in all in the pursuit of the perfect motion picture.

Jonathan may be an exaggerated version of an old Hollywood producer, but the energy and enthusiasm he brought to filmmaking  is patterned after the real producers, directors, and actors who made the classic movies you will find on TCM. Just turn on TCM on a given day, and you're likely to find a wonderful movie, whether it's the pure joy of a Marx Brothers comedy or the breathtaking brilliance of the glorious Technicolor works of British directors Michael Powell and Emeric Pressburger (BTW, The Red Shoes is airing tonight at 8 p.m.). That's why for so many of us who love old movies, TCM is more than just another channel in our cable package. In fact, TCM is one of the leading curators of the greatest art form of the 20th century, preserving and promoting these wonderful movies so they can be enjoyed today and by future generations. So, here's a hearty handclasp to the hardworking staff at TCM, and without further ado, Let's Movie! 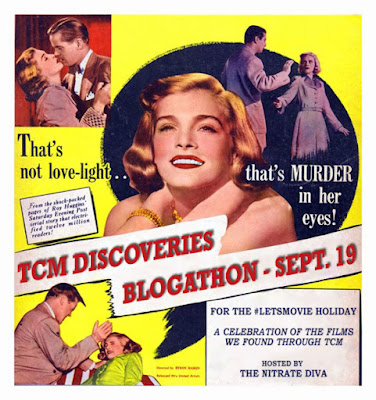 The Bad and the Beautiful is available on DVD and video on demand.