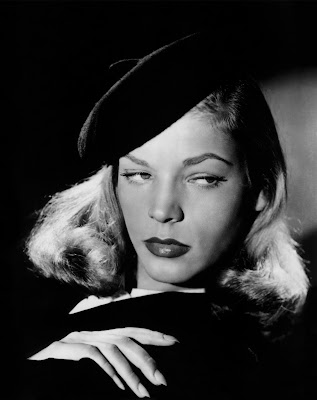 This article is part of The Lauren Bacall Blogathon hosted by In the Good Old Days of Classic Hollywood.

Lauren Bacall had many roles during her long, rich life. The legendary actress was a devoted wife and mother, a star of Broadway musicals, and a best-selling author. Old Hollywood films fans will always remember Bacall for her many great movie roles, especially her work in classic films noir like To Have and Have Not (1944) and The Big Sleep (1946). Today, I'm remembering Bacall's legacy in these films, which truly makes her the "queen of noir."

Bacall was born Betty Joan Perske on Sept. 19, 1924, in the Bronx. She was raised by her single mother, Natalie, who encouraged her interest in acting and the arts. Bacall began taking acting lessons at the American Academy of Dramatic Arts, and she made her Broadway debut at age 17 in a small part in Johnny 2 X 4. However, Bacall's greatest success came as a fashion model, where her striking looks and slim figure made her a sought after cover girl for magazines like Vogue and Harper's Bazaar.

Bacall got her big break when Slim Hawks, the wife of powerful Hollywood director Howard Hawks, spotted her on the cover of the March 1943 edition of Harper's Bazaar. Both Hawkses saw great potential in the 18-year-old beauty so they bought her a train ticket to Hollywood where she was given a seven-year contract from Warner Bros. Hawks then set about turning Bacall into a movie star. He particularly focused on her voice: Hawks required that she read aloud for several hours a day to deepen her already naturally low speaking voice.

Bacall won the lead role in Hawks' adaptation of Ernest Hemingway's novel, To Have and Have Not. Her co-star was Humphrey Bogart, then at the height of his fame after coming off his huge success in Casablanca (1942). Bacall, an inexperienced 19 year old, was terrified as she recalled in her autobiography, By Myself. "My hand was shaking, my head was shaking, the cigarette was shaking, I was mortified," she wrote. Bacall realized that if she lowered her head and looked up at Bogart, she could steady herself. That idiosyncratic mannerism came off as confidence onscreen and was played up by Warners' studio publicists as "The Look."

Bacall became an overnight sensation when To Have and Have Not was released. Young women everywhere copied her clothes, hairstyle and makeup in an effort to achieve "The Look," although there was much more to Bacall's performance than simply her beauty and her fashion sense. Bacall's portrayal of Marie "Slim" Browning certainly isn't the first onscreen femme fatale -- Mary Astor was a memorable shady lady in The Maltese Falcon (1941) -- but Slim became the prototype for a new kind of leading lady that would become wildly popular in postwar America. Slim certainly wasn't as duplicitous as Astor -- Brigid O'Shaughnessy tells so many lies even she loses track of her own stories -- but Bacall's performance possesses a raw defiance that was essentially new to old Hollywood films. Slim is a sultry, sassy woman of the world who could hold her own against any man, and the men, or at least Humphrey Bogart, respond with wide-eyed admiration as you can see from the famous "whistle" scene (clip below).


Bacall's next movie, Confidential Agent (1945) with Charles Boyer, wasn't a success, but she returned to form with The Big Sleep, another Hawks-directed noir that co-starred Bogart (by the time the movie was released Bogie and Bacall were married). The Big Sleep, based on Raymond Chandler's novel about the Los Angeles underworld, features Bogie as detective Philip Marlowe, and Bacall as sultry socialite Vivian Rutledge, who is hiding dark secrets about her wild child sister Carmen (Martha Vickers).

Vivian's father (Charles Waldron) hires Marlowe to uncover his daughters' illicit activities, which results in a battle of wills between Vivian and Marlowe. Even though Marlowe always gets the best one-liners, there is always the sense that Vivian and the detective are equals in love and war.  They go toe-to-toe, first in Vivian's boudoir, then in Marlowe's office, and finally in an illegal gambling den where their discussion about "horse-racing" pushed the boundaries of movie censorship (clip below).


The relationship between Marlowe and Vivian set the template for many later femmes fatale, but there are key differences between Bacall's role and those of later noir actresses. Vivian certainly has her share of hangups -- she likes to drink and racks up the gambling debts -- but she certainly isn't a victim of unsrupulous men like Gilda (Rita Hayworth), a cold-blooded murderer like Phyllis Dietrichson (Barbara Stanwyck) in Double Indemnity (1944), or a man-hungry basket case like virtually every female character in Kiss Me Deadly (1955). Instead, Vivian is an independent woman who is in control of her own destiny and her choice of partner.

Hawks lost interest in Bacall after The Big Sleep; there are many theories about this, but Bacall stated in By Myself that she felt it was because of her marriage to Bogart. Of course, she appeared in many great movies in her career, including the noirs Dark Passage (1947) and Key Largo (1948) with Bogart, but she never re-created the femme fatale persona. Still, Bacall will always be remembered for her first two films, which shattered stereotypes and led to a new type of independent woman in Hollywood.