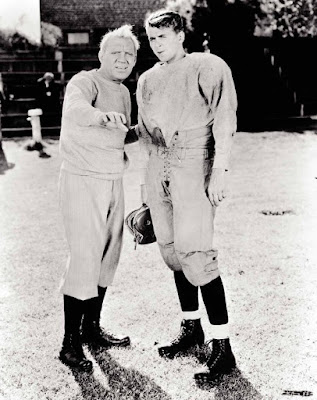 Football season is in full swing so now is a good time to look at the classic gridiron movie, Knute Rockne, All American (1940) starring Pat O'Brien as the legendary Notre Dame coach who revolutionized the game and established Notre Dame as a football powerhouse. Here's a viewer's guide to one of the most memorable football movies of all time.

Source Material: Knute Rockne, All American is based on Rockne's private papers and the recollections of his family and friends.

The Plot:  The film follows Knute (pronounced "Canute") Rockne from his childhood in Norway to his early day in Chicago after his family immigrated to the U.S. Rockne majored in chemistry at Notre Dame University in South Bend, Ind., and he later taught at the school, but eventually, his passion for football took over his life. He became Notre Dame's head coach where he popularized the passing game and made Notre Dame a national football powerhouse.

Backstory: Rockne was a celebrity in the 1920's and 1930's. He even appeared in movies (the clip below shows Rockne recreating an inspiring locker room speech for the cameras), so it was only natural that Warner Bros. was interested in making a biopic of his life story. Screenwriter Robert Buckner worked with Rockne's widow and his colleagues to create a fairly accurate, but sanitized version of Rockne's life.

Best Performance: Pat O'Brien as Knute Rockne. Rockne was an unusual casting choice for Knute Rockne: he didn't really look like the blond Norwegian, and, at 40, he was considered a bit too old to play Rockne during his college days. However, O'Brien lobbied hard for the part, and after Notre Dame objected to Warner's first choice, James Cagney, because of his liberal beliefs, they settled on O'Brien. O'Brien worked diligently to perfect Rockne's idiosyncratic mannerisms and speaking style, and he worked with a personal trainer and went through three hours a day of extensive makeup so he could convincingly portray Rockne. The result is a great performance that is one of the highlight's of O'Brien's career.

Best scene: The deathbed scene between Rockne and his star player George Gipp, aka The Gipper (clip below).

Best Line: "Sometime when the team is up against it, and the breaks are beating the boys, tell them to go out there and win just one for the Gipper," George Gipp.

Reagan: The future 40th president was just a lowly contract player at Warner's when he got the star making role of George Gipp, a Notre Dame player who died at age 25 from strep throat after leading Notre Dame to a thrilling victory against Northwestern. The Gipper doesn't have much screen time in Knute Rockne, All American -- it's really only an extended cameo -- but Reagan knew it could make his name. Reagan lobbied hard to get the role, even though Warner's tested other strapping young stars like John Wayne, William Holden, and Dennis Morgan. Reagan finally convinced producers to cast him after showing them pictures of his all-star football days at Eureka College in Illinois. Reagan's memorable performance kick-started his career, and he became one of the leading stars of the 1940's. Reagan often referenced Knute Rockne, All American and the "win one for the Gipper" line during his Presidential campaign.

Notre Dame: Knute Rockne, All American, was filmed in cooperation with Notre Dame officials, and it is only one of two movies that was made on the Notre Dame campus.  The other is the 1993 movie, Rudy.

My take: Football movies aren't quite as popular as boxing or baseball movies, but they still have a special place in Hollywood. Old Hollywood studios primarily used football in B movies and comedies, like the Marx Brothers' Horse Feathers (1932).  Knute Rockne, All American was one of the first movies to take football seriously, and it paved the way for later hits like The Blind Side (2009) and, of course, Rudy. Even if you don't like football, Knute Rockne, All American is a fun, fast-paced movie that avoids the all too frequent biopic trap of depicting every detail of the subject's life. It features a great leading performance from O'Brien, and Reagan's film career -- and probably his political career -- would have been very different if he hadn't made this film.

Availability: Knute Rockne is available on DVD and video on demand.

This article is part of my series about 1940 in film.