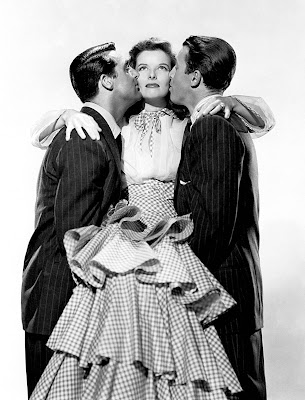 2015 is the 75th anniversary of the films of 1940. Throughout the fall, I'll be celebrating the diamond anniversary of films like The Philadelphia Story, starring Cary Grant, Katharine Hepburn, and James Stewart.


1940 was a landmark year for cinema. The movie milestones of this memorable year include director Alfred Hitchcock's American debut,  comedy team Laurel and Hardy's retirement, and the beginnings of film noir. I'll celebrate the diamond anniversary of 1940 in film with a series of articles on the movies, actors, and directors that made 1940 such a great year for movie lovers. Below, is a brief outline of some of the things I'll be covering throughout the rest of 2015. I'll add links as I complete the articles.

The comedian W.C. Fields played one of his last great roles in The Bank Dick.

Knute Rockne, All American is one of the first movies to take a serious look at college football.

The fan magazines of Sept. 1940 were on the case of Claudette Colbert's "forgotten" legs.

When You Wish Upon a Star won the 1940 Oscar for best original song.

The Shop Around the Corner is one of old Hollywood's great romances. It inspired two interesting remakes: In the Good Old Summertime (1949) and You've Got Mail (1998).

The Joad's cross country journey in The Grapes of Wrath is one of the most harrowing automobile trips in American cinema.

Hollywood takes on the Nazi regime with films like The Great Dictator, Night Train to Munich, and The Mortal Storm.

The last glorious flowering of screwball comedy occurs with The Philadelphia Story and His Girl Friday.

John Ford's film The Grapes of Wrath confronts the harsh realities of the Great Depression.

Film noir begins with movies like The Letter and Stranger on the Third Floor.

The comedian W.C. Fields plays his last great role in The Bank Dick.

James Stewart and Margaret Sullavan star in one of director Ernst Lubitsch's best films, The Shop Around the Corner.

Ronald Reagan appears in his breakout role in Knute Rockne, All American.

Ginger Rogers achieves her goal of becoming a serious actress by winning an Oscar for Kitty Foyle.

Keye Luke stars in Phantom of Chinatown as Chinese detective Mr. Wong, making him the first Asian actor to play an Asian detective.

A rise in films about World War I like Waterloo Bridge and The Fighting 69th.

Special effects spectaculars like The Thief of Bagdad and Typhoon wow audiences.

1940 was a great year for Westerns, including Santa Fe Trail and The Westerner.

Tom and Jerry, Woody Woodpecker, and Bugs Bunny appear on screen for the first time.

Bob Hope, Bing Crosby, and Dorothy Lamour appear in the first of their road comedies, Road to Singapore.

Comedy Team Abbott and Costello debut in One Night in the Tropics.