The Bells of St Mary's 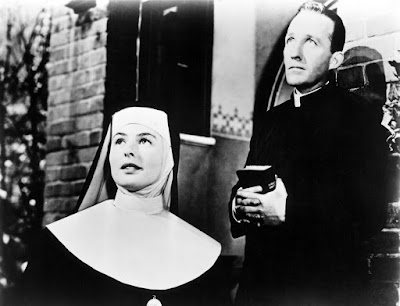 Today, I'm celebrating Ingrid Bergman's 100th birthday with an article about her wonderful performance in The Bells of St. Mary's (1945). Here she is with Bing Crosby in a publicity still for this family drama.

In today's movie universe of the superhero and the super spectacle, it seems that stories about the lives of ordinary people are sometimes left behind. The Bells of St. Mary's (1945), co-written and directed by the underrated Leo McCarey, works so well because it deals with the everyday struggles of regular people; in this case, a laid back priest  and a dedicated nun, who are trying to keep an inner city parochial school afloat through financial hardship, community resistance, and illness.

The Bells of St. Mary's follows Father Chuck O'Malley (Bing Crosby), who is assigned to become the priest at St. Mary's, an inner city elementary and middle school. St. Mary's building is run down and the nuns who teach at the school don't have the money to fix the leaking roof and drafty hallways. O'Malley suggests closing the school, but the sisters are adamantly opposed, especially the determined principal, Sister Mary Benedict (Ingrid Bergman, in a radiant performance). O'Malley and Sister Benedict eventually become uneasy allies. Sometimes they work together, and sometimes they disagree, but they forge a tender friendship that makes the ending of the film quite poignant.

The Bells of St. Mary's is actually a sequel to Going My Way, a 1944 drama that introduced Father O'Malley. That movie was a box-office sensation and won seven Academy Awards, including Best Picture and Best Actor for Crosby. It was only natural that a sequel would be in the works, so McCarey revived a dream project  about his beloved aunt, another Sister Mary Benedict,  who lived out her vocation at The Immaculate Heart Convent in Hollywood.

Crosby was ready and willing to reprise his role as O'Malley, but Bergman was under contract to independent producer David O. Selznick and she had to coax him to loan her out to RKO for The Bells of St. Mary's. Bergman was eager to play Sister Mary Benedict because she  wanted a change of pace from heavy dramas like Gaslight (1944). Still, she brought her accustomed hard work and preparation to the role, meeting with McCarey's aunt and other nuns who worked as teachers, according to the TCM database. 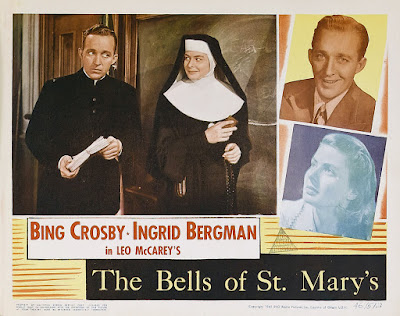 Although Crosby gives a fine performance -- he gets to croon some tunes like the Oscar nominated, "Aren't You Glad You're You," and lay on corny catchphrases like "just dial 'O' for O'Malley" -- The Bells of St. Mary's belongs to Bergman. She is the emotional center of the film in much the same way that Barry Fitzgerald is the heart and soul of Going My Way.

In fact, Bergman elevates what would have been just another mushy melodrama into a work of art through her transcendent performance as Sister Mary Benedict. Film critic David Thomson wrote about how Bergman was always  "true" on screen, and you only have to watch a few minutes of The Bells of St. Mary's to see how right he is in this case. Bergman is one of the few old Hollywood actors -- James Cagney is another -- who can transform almost any type of role into a personal artistic statement. With Cagney, it was through the sheer force of his personality. The small-time hoods he played in movies like The Public Enemy (1931) and Angels with Dirty Faces (1938) become larger than life due to Cagney's charisma (Orson Welles once said Cagney displaced air on screen and that's about the best explanation of his peculiar  magnetism I've ever read). 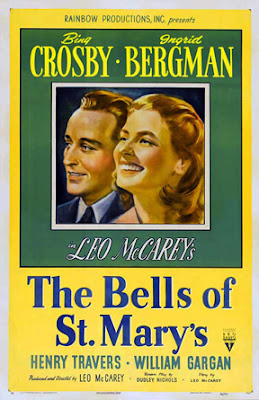 Bergman's power is more spiritual. She was lauded for playing Joan of Arc on stage and screen, but Bergman brings a divine dimension to her more worldly roles like Ilsa Lund in Casablanca (1942) and Alicia Huberman in Notorious (1946). Sister Benedict certainly isn't a saint, she likes a scrap and she isn't afraid to go toe-to-toe with Father O'Malley, but Sister Benedict is also a true believer who deeply loves the children in her care. Bergman is masterful in both the movie's comic scenes -- she teaches a young boy to box so he can defend himself against bullies -- and the more dramatic moments. The movie's final sequence, which I won't reveal here, would be corny in any other hands, but Bergman makes it truly heartbreaking.

I'll leave you with my favorite sequence of the film, which is also a great example of both The Bells of St. Mary's and Bergman's appeal. Both O'Malley and Sister Benedict have been working on a rich curmegdeon, Mr. Bogardus (Henry Travers), to donate his unused factory so it can become the new St. Mary's school. After a health scare, Bogardus wanders into St. Mary's to pray, and well, you'll see what happens next.


The Bells of St. Mary's is available on DVD and Blu-ray.