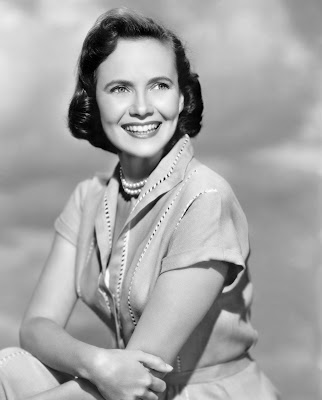 
TCM is celebrating the career of Teresa Wright with 12 movies on Aug. 4. Here's what you need to know about one of the best actresses of the 1940's.

Died: March 6, 2005 in New Haven, Conn. She is buried in the Evergreen Cemetery in New Haven.

AKA: Wright's birth name was Muriel Teresa, but she dropped her first name when she began her stage career.

Brief bio: Wright took an interest in acting at a young age. She studied acting at the Wharf Theater in Provincetown, Mass., and she soon landed on Broadway. Producer Samuel Goldwyn signed her to an exclusive contract after discovering her in the play Life With Father. Wright's first movie role was in the critically acclaimed The Little Foxes (1941) co-starring Bette Davis, and Wright soon became one of the most sought after actresses of the 1940's appearing in classics like in Mrs. Miniver (1942), The Best Years of Our Lives (1946), and Shadow of a Doubt (1943). Wright fell out with Goldwyn in 1948 -- she disliked publicity and refused to appear in roles that she thought were sub-standard -- and he cancelled her contract. She turned to television and the stage, but after the 1980's she mostly led a quiet life in New England. She did return to the movies for a part in The Rainmaker (1997) directed by Francis Ford Coppola.

Fun fact: Wright had it written into her contract that she would not pose for fan magazine photographs in a bathing suit.

Signature role: Peggy Stephenson in The Best Years of Our Lives (1946).

My Summer Under the Stars top three:
1. Shadow of a Doubt, airing at 10:15 p.m., is one of my favorite films directed by Alfred Hitchcock, and Wright is sensational as a naive teenager who falls under the spell of her devious uncle. This movie doesn't get revived as often as it should, so this is a great opportunity to catch it.
2. The Best Years of Our Lives, airing at 5 p.m., is simply one of the best films of the 1940's. Director William Wyler sensitively deals with the realities of life on the home front after World War II in a deeply emotional movie that still makes a powerful statement 80 years after the end of the conflict.
3. TCM switched my earlier pick of Casanova Brown, so I'll go with Mrs. Miniver, airing at 2:30 p.m., a great movie about an English family's struggles during World War II.

A great film not featured on Summer Under the Stars: Pursued (1947) is a great "adult" Western co-starring Robert Mitchum. 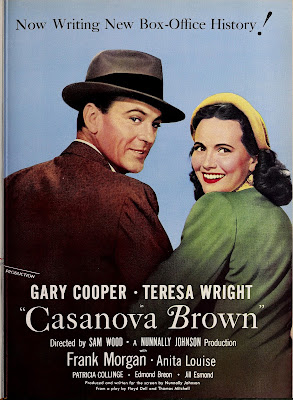 Video: Wright discusses working with Hitchcock in Shadow of a Doubt.

Old Hollywood GIF: Teresa Wright meets a car in Shadow of a Doubt. Courtesy of giphy.com

My review of Mrs. Miniver.