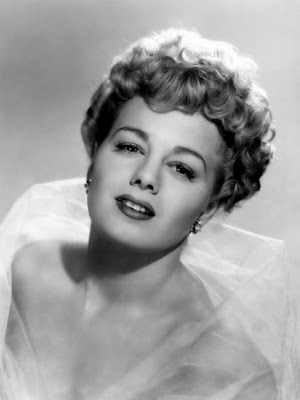 
TCM is celebrating the career of Shelley Winters with 12 movies on Aug. 31.  Here's what you need to know about this widely respected actress. FYI: TCM sometimes changes the air times and /or movies, so you can go to www.tcm.com to check the updated schedule.

AKA: Winters was born Shirley Schrift. She took her stage name from the poet Percy Bysshe Shelley and her mother's maiden name of Winter. Universal Pictures executives later added the 's' at the end.

Brief bio: Winters grew up in Brooklyn as the daughter of Austrian immigrants who worked in the New York garment industry. Winters became interested in acting at a young age, and she worked a variety of odd jobs to pay for her classes at the New School. Winters struggled at first, but she got her big break in 1947 when she had a key supporting role in A Double Life. Winters soon got parts as the love interest in movies like Winchester '73 (1950) and He Ran All the Way (1951), but as her career progressed, she wasn't afraid to take on un-glamorous, but challenging roles in movies like A Patch of Blue, Lolita (1962), and The Diary of Anne Frank.  Winters never stopped learning about her craft; she played Shakespeare and studied and taught at the Actor's Studio throughout her career. Winters kept busy with film and TV appearances right through the 1990's.

Fun Fact: Winters and Marilyn Monroe were roommates when they first started out in Hollywood.

1.Winters was in some great films noir in the early 1950's, including He Ran All the Way, airing at 2:30 p.m. This movie co-stars John Garfield as a killer on the run who holes up in Winters' apartment.
2. Winters is fearless in A Patch of Blue, airing at 8 p.m., as the racist mother of a blind girl (Elizabeth Hartman) who is in love with a black man (Sidney Poitier).
3.The Poseidon Adventure, airing at 12:45 a.m., is a great way to end the 2015 Summer Under the Stars. Winters gives an Oscar-nominated performance as a feisty grandmother, but this 1972 disaster epic also features a lot of old Hollywood stars like Red Buttons, Roddy McDowall, and Ernest Borgnine.

A great movie not featured during Summer Under the Stars: A Place in the Sun is Winters' best screen performance. She plays the frumpy girlfriend that Montgomery Clift casts aside for the glamorous Elizabeth Taylor.

Old Hollywood video: Winters and Frank Sinatra duet on "A Good Man is Hard to Find" in Meet Danny Wilson (1951).

Fan Magazine Flashback: A vintage ad for He Ran All the Way. Courtesy of the Media History Digital Library. 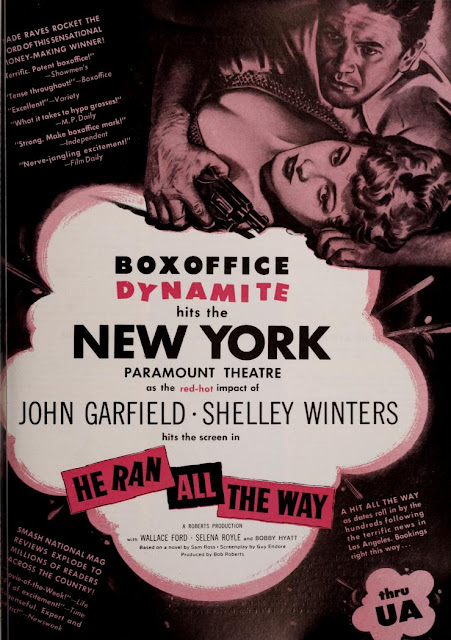 Old Hollywood GIF: Shelley Winter sinks beneath the waves in The Night of the Hunter (1955).

Old Hollywood Archives: My look at the female characters in The Night of the Hunter.