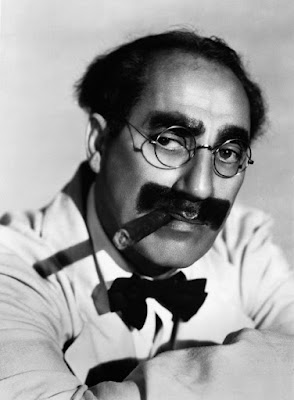 
TCM is celebrating the career of Groucho Marx with 15 movies on Aug. 14. Here's what you need to know about one of old Hollywood's legendary funny men. FYI: TCM sometimes changes the air times and /or movies, so you can go to www.tcm.com to check the updated schedule.

AKA: Groucho's real first name was Julius. He got his nickname because of his irritable disposition.

Brief bio: Groucho grew up as the third of five surviving sons born to Jewish immigrants, Samuel and Minnie Marx. His family was poor, but that didn't stop his determined mother from dreaming of a show business career for her beloved boys. The brothers began performing on vaudeville as a singing group while they were still quite young. They only met with moderate success until one night during a disastrous performance in Nacogdoches, Texas, Groucho began hurling insults at the audience. Ironically, the audience ate up the insults, howling at one-liners like "Nagocdoches is full of roaches," and one of the greatest comedy teams of the 20th century was born. The brothers gradually honed their personas -- Chico was the happy-go-lucky Italian with fractured English; Harpo was a silent man-child who liked to chase skirts: Zeppo was the handsome straight man, and Groucho was the cigar-chomping wiseacre who was always quick with a quip. The brothers were the toast of Broadway during the 1920's, and they moved to Hollywood in 1929. They made 13 successful movies together before disbanding in 1949. Groucho later became a television icon through the long-running game show, You Bet Your Life, and frequent appearances on The Dick Cavett Show.

Fun fact: Groucho loved to read, and he corresponded with writers T.S. Eliot and Carl Sandburg.

My Summer Under the Stars top three:
1. Duck Soup (1933), airing at 10:45 p.m., is the best of the movies made with all-four brothers (Zeppo left acting to become a Hollywood agent after Duck Soup). It is an hilarious political satire featuring Groucho as the unscrupulous Rufus T. Firefly, who becomes dictator of the small country of Freedonia.
2. A Night at the Opera (1935), airing at midnight, is the best of the brothers' MGM movies. It contains the iconic crowded stateroom scene, plus there's plenty of Groucho-Margaret Dumont fun.
3. Room Service (1938), airing at 9:30 a.m., isn't one of the the more highly regarded Marx Brothers movies, but it's still a sentimental favorite for me (this was the first Marx Brothers I ever watched) plus, there's nothing more hilarious than Groucho singing "Swing Low, Sweet Chariot." 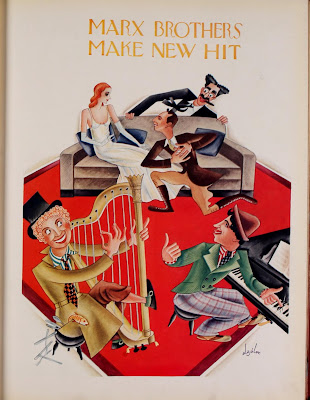 Old Hollywood video: Character actor Pedro Gonzalez-Gonzalez got his big break on You Bet Your Life.
.

Old Hollywood GIF: Groucho dancing in A Day at the Races (1937). Courtesy of giphy.com.