None But the Lonely Heart 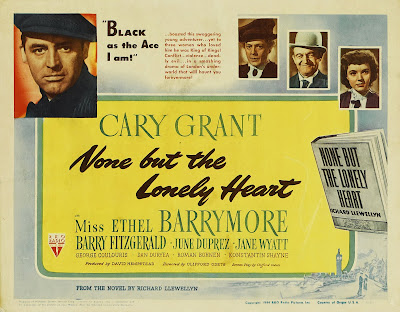 Today, I'm reviewing the 1944 drama None But the Lonely Heart starring Cary Grant and Ethel Barrymore as a mother and son struggling to make ends meet on London's East End.

This article is part of The Barrymore Trilogy Blogathon hosted by In The Good Old Days of Classic Hollywood.


Old Hollywood has provided us with many portrayals of Cockney life from the Doolittles in My Fair Lady (1964) to the many butlers and bobbies played by the wonderful character actor Arthur Treacher. None But the Lonely Heart (1944), starring Cary Grant and Ethel Barrymore as a poverty stricken mother and son, is a fine drama about the realities of life in London's East End during the early 20th century.

None But the Lonely Heart tells the story of Ernie Mott (Grant) and his "Ma" (Barrymore in an Oscar-winning performance) who own a small secondhand shop. Ernie mostly drifts around the neighborhood with his bull terrier, Nipper, until he finds out that his beloved Ma has cancer. For a short period of time, Ernie settles down and becomes a productive citizen -- he helps Ma out in the shop and starts a serious romance with a lovely girl (June Duprez) who works at the local arcade -- but, eventually, a local gangster (George Coulouris) lures Ernie into a life of petty crime.

RKO pictures bought the rights to Richard Llewellyn's critically acclaimed novel specifically for Grant, who had grown tired of the comic roles that made his name. Grant, who was pushing 40, was especially dissatisfied with his last film Arsenic and Old Lace (1944), and he wanted to take on more serious roles. Grant jumped at the chance to play Ernie, and RKO spared no expense to make None But the Lonely Heart the prestige picture of the year. RKO built an elaborate set for the Mott's East End neighborhood (it was the largest exterior set every constructed at that time) in a cavernous sound stage. Securing the services of Barrymore was also costly. She was appearing on Broadway in The Corn is Green, so RKO chief Charles Koerner paid all of the expenses for shutting down the play for two weeks so Barrymore could travel to Hollywood.

Barrymore was certainly worth all of RKO's money. She gives an outstanding performance, winning her only Oscar for best supporting actress. Barrymore has the best Cockney accent (she certainly beats Grant whose accent wavers somewhere between Michael Caine and a Cary Grant impersonation), and she also casts aside all vanity to convincingly play a tired, sick woman who has grown weary of life's many trials. Barrymore and Grant also have great chemistry together. Their performances make it clear that while Ma and Ernie have a deep love for one another, they are also frustrated by one another at times: She has grown tired of his devil-may-care attitude, and he is hurt by her reserved demeanor.

Grant received his second Academy Award nomination for None But the Lonely Heart (the first was for Penny Serenade) and it's certainly one of his most interesting performances. Grant was a highly skilled screen actor who usually relied on his charm, good looks, and expert timing to give wonderful performances in films like Bringing Up Baby (1938) and North by Northwest (1959). Audiences weren't used to Grant displaying raw emotion, so when he destroys a bird cage in a fit of rage it can be quite a shock.

The circumstances in None But the Lonely Heart were quite similar to Grant's own background. He grew up in a working class home in Horfield, England, where he father worked in a laundry. He was quite close to his mother, but she was admitted to a mental institution when he was young man (Grant did not know this until after his mother's death; he actually thought his mother had abandoned the family), and Grant had a trouble childhood until he joined a stage troupe as an acrobat at age 14. 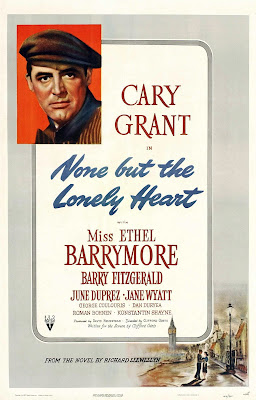 None But the Lonely Heart does a fine job of reflecting the harsh realities of a working class existence. Ma and Ernie scrape by with the income from their secondhand shop -- they splurge on sausage and mash once a week -- but they start earning real money when Ernie starts working for the local gangster. Ernie earns enough to get electricity and purchase a refrigerator and radio for his beloved Ma (my favorite scene in the movie is when Ma shows off her new possessions to the curious neighbors), but in the end, Ernie's ill-gotten gains destroy everyone around him, most especially Ma.


blogathons Cary Grant Ethel Barrymore None But the Lonely Heart