Lillian Gish in The Night of the Hunter 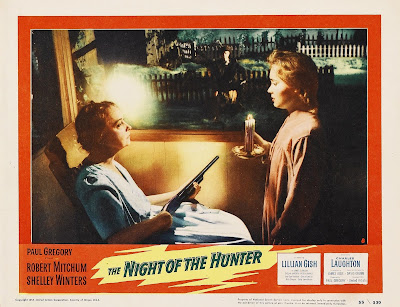 Today, I'm looking at the character of Rachel Cooper played by the great actress Lillian Gish in The Night of the Hunter (1955). In this vintage poster, Gish is holding the shotgun with Gloria Castilo holding the candle and Robert Mitchum in the background.

This article is part of the Anti-Damsel blogathon hosted by Movies Silently and The Last Drive-In.


Note: there are spoilers ahead.

In Charles Laughton's masterpiece The Night of the Hunter (1955), ex-con "preacher" Harry Powell (Robert Mitchum) mesmerizes audiences with "the story of right hand/left hand" (clip below). He uses the tattoos on his hands for a melodramatic recreation of the Biblical tale of Cain and Abel that never fails to mesmerize his audience with a few notable exceptions (I'll get to that later).

Powell's story is a metaphor for the battle between good and evil that plays out throughout The Night of the Hunter. Good is represented by the kind-hearted widow Rachel Cooper (Lillian Gish) and evil is embodied by the menacing Powell. The pair fight for the souls of two innocent children in a story of greed, religious fervor, and murder set in 1930's West Virginia.

The Night of the Hunter also focuses on Powell's relationships with the women in the movie. They are either his willing dupes like ice cream shop owner Icey Spoon (Evelyn Varden), his helpless victims like Willa Harper (Shelley Winters) or his nemeses like Rachel Cooper, who qualifies for the anti-damsel tag because she has an unwavering moral compass and she knows how to use a shotgun.

The Night of the Hunter follows John Harper (Billy Chapin) and his younger sister, Pearl (Sally Jane Bruce). Their father (Peter Graves) kills two people in a bank robbery, but he hides $10,000 in stolen cash in Pearl's rag doll before being hauled away to the state penitentiary where he is eventually hanged. Only the children and their father know where the money is, until he accidentally lets a small bit of information slip out to Powell, who is his cellmate (the preacher got locked up for stealing a car). Once he is paroled, Powell makes a beeline to John and Pearl. He is determined to get his hands on the money, even if it means marrying the children's emotionally fragile mother.

The first half of The Night of the Hunter pivots around Powell, who is brilliantly played by Mitchum with equal parts smarmy charm and terrifying menace. Mitchum, who was always one of old Hollywood's most seductive leading men, portrays Powell as a cunning con man who uses his good looks, lovely baritone voice, and especially his veneer of religious piety to captivate women. One of the most brilliant aspects of Laughton and James Agee's screenplay (based on the novel by David Grubb) is how almost every character grovels at Powell's feet because he portrays himself as "a man of God." His ability to quote chapter and verse instantly gets him a fan club in the Harper's small town, and soon he is holding revival meetings where he whips up the faithful into a religious frenzy.

Powell's most conspicuous conquest is John and Pearl's mother. She falls completely under the spell of the mesmerizing preacher, and when they marry she becomes his helpless victim. Powell constantly lies to her (he tells her the $10,000 is at the bottom of the Ohio River), breaks her spirit (he mocks her for wanting normal marital relations), and, most insidiously, he causes her to distrust her own children.  When Powell murders her after she is no longer of any use to him, it's almost an afterthought: he has already stripped her of all dignity and self respect.

The second half of the film focuses on Cooper, or Miz Rachel, as the children call her, and  she is the polar opposite of  Powell in every respect. Miz Rachel certainly knows her Bible and her hymns (Gish and Mitchum actually have a nice duet to "Leaning on the Everlasting Arms"), but Miz Rachel's religion isn't a tool that she uses to manipulate others. Instead,  she uses it to help others, especially children like John and Pearl who are caught up in the hard times of The Great Depression.

Gish always had an aura of saintliness in her movies, especially in her collaborations with D.W. Griffith. In The Night of the Hunter, Laughton both upholds that image and cleverly subverts it. Miz Rachel is certainly a gentle, understanding woman to her young charges, but she has an inner core of steel that even Mitchum cannot break. At first, he tries charm, but Miz Rachel sees right through his crocodile tears and quickly gets out the shotgun (if you compare the clip below to the clip at the top of the article, you'll see how Powell gets a very different reception to his "right hand/left hand" story).

When Powell's charm offensive doesn't work, he tries physically menacing Miz Rachel, which sets up an extremely tense night scene where he stalks outside the farmhouse. Even faced with Mitchum's switchblade and his superior physical prowess, Miz Rachel doesn't bend. In the end, she defeats Powell because she has a different kind of strength. While Powell's power over others is based on his large size and his ability to manipulate and deceive, Miz Rachel has a moral strength that comes from spiritual qualities like love and truth , although her skill with a shotgun certainly doesn't hurt her noble cause.

The Night of the Hunter is available on DVD and video on demand.