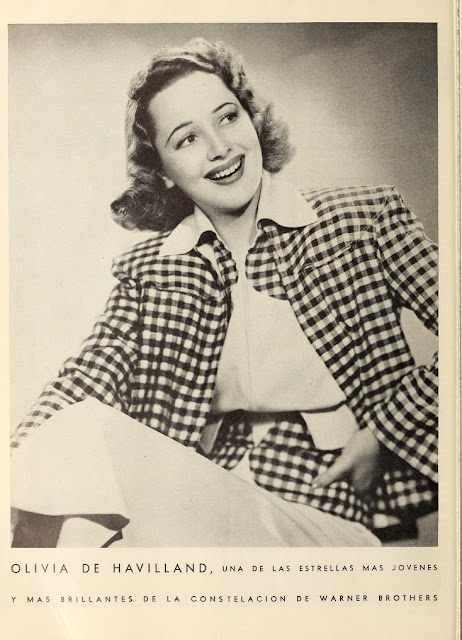 Today, I'm celebrating Olivia de Havilland's 99th birthday with a look at how the fan magazines covered her legendary career. Above, is a lovely 1938 portrait from the Spanish-language magazine, Cinemundial. The caption reads, "one of the youngest and brightest stars in the Warner Brother's constellation." All images are courtesy of the Media History Digital Library.


Actress Olivia de Havilland, who turns 99 on July 1, is one of old Hollywood's living legends. She began her career at Warner Bros. in 1936, and she quickly became a popular leading lady opposite Warner's leading swashbuckling star Errol Flynn. De Havilland and Flynn would become a popular screen team, appearing in eight films together, but de Havilland longed for more substantial parts. She had a breakthrough role as Melanie Hamilton in Gone With the Wind (1939), but she still wasn't satisfied with her parts at Warner's. Her fortunes improved after a lengthy legal battle with studio, and de Havilland went on to win two Best Actress Oscars for To Each His Own (1946) and The Heiress (1949). De Havilland only appeared in a few films after the birth of her two children in the 1950s, but they are among her best, including Light in the Piazza (1962) and Hush...Hush Sweet Charlotte (1964).

There are links to the original articles in the highlighted text, but sometimes you have to flip a few pages in the reader to find the correct article. 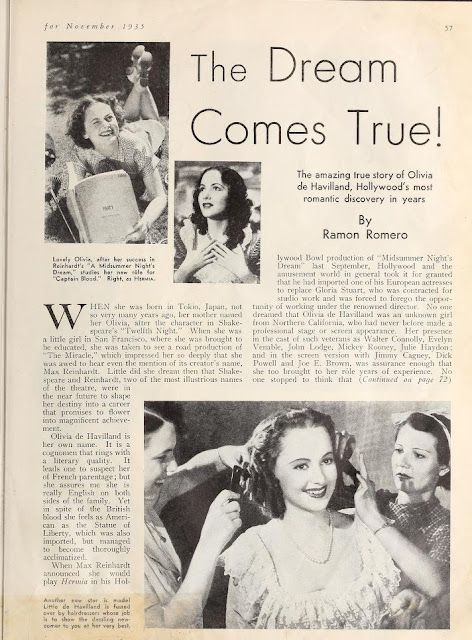 De Havilland made her screen debut at the ripe old age of 19, appearing as Hermia in Max Reinhardt's production of A Midsummer Night's Dream (1935). As Screenland correspondent Ramon Romero outlined in his article, "The Dream Comes True!," de Havilland got the part in the stage production after Gloria Stuart dropped out. Reinhardt insisted on casting her in the film version opposite big stars like James Cagney and Dick Powell. Romero assures his eager readers that despite de Havilland's French name and English origins, "she feels as American as the Statue of Liberty." Note: to view this article move two pages to the left after clicking the link. 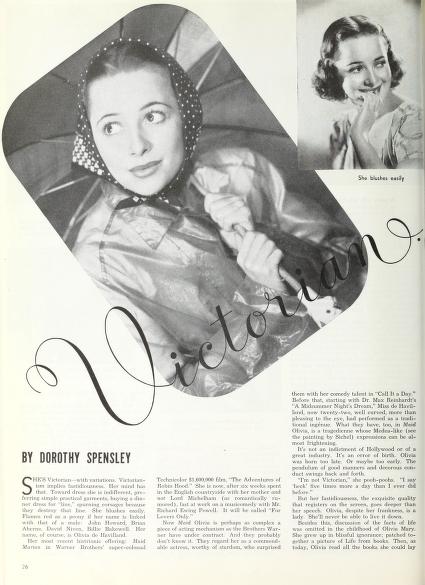 De Havilland became a favorite of the fan magazines after playing Maid Marian in The Adventures of Robin Hood (1938) opposite her frequent co-star Errol Flynn. In this Photoplay article, "Victorian, With Variations," eager correspondent Dorothy Spensley informs her readers that 22-year-old de Havilland is a pious Victorian throwback who thrives on good works like removing  snails from a shrine to the Virgin Mary. De Havilland "pooh-poohs" that claim, stating that she is as modern as any girl. "I say 'heck' five times more a day than I ever did before," she confesses. 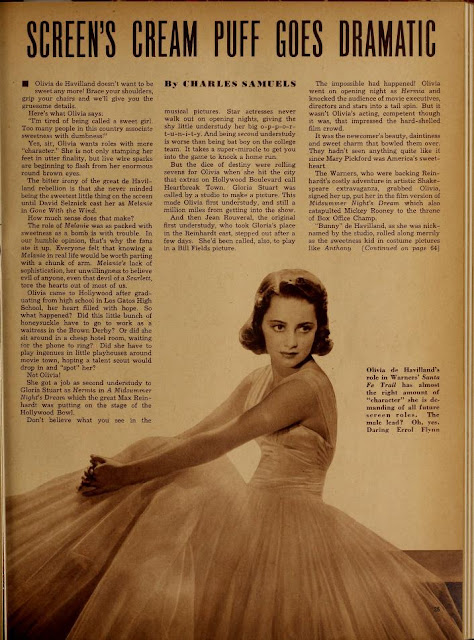 This Hollywood magazine article, Screen's Cream Puff Goes Dramatic, details de Havilland's battles with Warner Bros. for better roles. "Olivia de Havilland doesn't want to be sweet anymore!" according to correspondent Charles Samuels. "Brace your shoulders, grip your chairs, and we'll give you the gruesome details." Actually, de Havilland's legal battles with the studio led to greater freedom for Hollywood actors. Studio chief Jack Warner suspended de Havilland several times for refusing certain parts, so when her Warner's contract ended (de Havilland moved to Paramount Pictures), Warner required that she "make up" for the time she was on suspension by adding six months to her contract.  De Havilland fought and won a case in the California Supreme Court that placed a seven year time limit on studio contracts. The de Havilland Law is still in effect today. Note: to view this article move one page to the left after clicking the link. 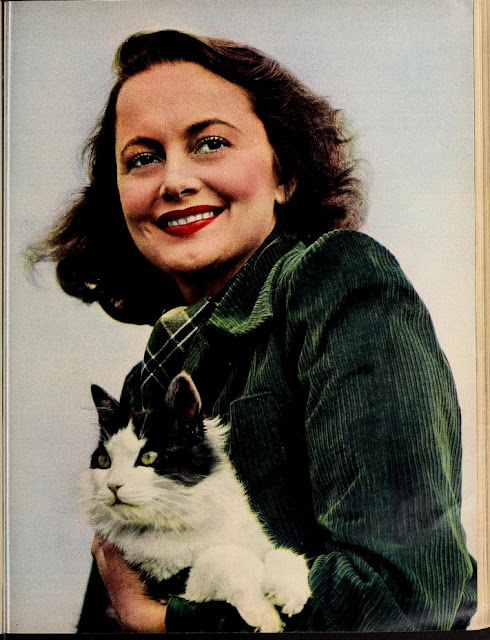 This beautiful 1949 portrait of de Havilland and her feline friend comes from "What Price Glory?," an article in Modern Screen magazine that details de Havilland's great success as a dramatic actress in the late 1940s in films like To Each His Own and The Snake Pit (1948). 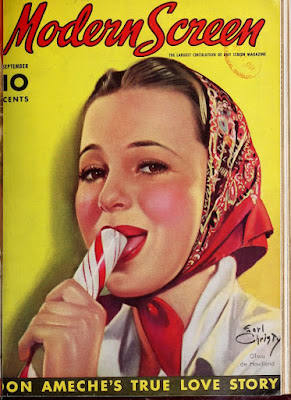 The Media History Project is a nonprofit organization that has collected more than 1.3 million pages of fan magazines and trade publications into a massive digital library. Go here to browse through the archives or to consider sponsoring this worthwhile organization.