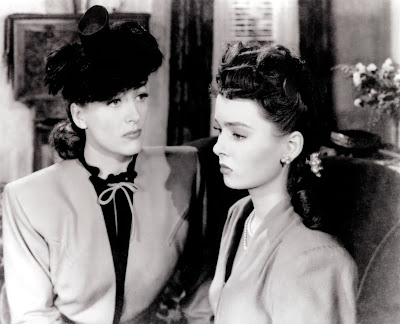 
Mildred Pierce (1945) has a fascinating place in film noir history. It is an influential noir thanks to the stylish direction of Michael Curtiz, but it is also a seminal women's picture starring Joan Crawford, who is arguably old Hollywood's greatest female star.

Mildred Pierce has enough murder and mood lighting to satisfy noir fanatics, but its plot is quite different than the typical private eye movies that populate the genre. Instead, Mildred Pierce tells the story of a working class mother who builds a successful chain of chicken and waffle diners only to see her life ruined by her playboy husband (Zachary Scott) and her selfish daughter (Ann Blyth). Curtiz directed many classics (The Adventures of Robin Hood, Angels with Dirty Faces, Casablanca), but in many ways Mildred Pierce is the most interesting film in his long career. It features a crackling murder mystery and one of the most fascinating and complex mother-daughter relationships in cinema. The great cinematographer Ernest Haller provides low-key lighting and the elaborate sets recall the German Expressionism films of the 1920s and 1930s.

Central mystery: The opening scene of Mildred Pierce is a doozy. We see a beach house (a real Malibu home owned by Curtiz) shrouded in darkness, followed by several loud gunshots and the flailing body of a tuxedo-clad man (Scott) falling towards the camera while uttering, "Mildred." The scene is brilliantly choreographed by Curtiz and sets up the central mystery that will drive the film: "Who killed Monte Beragon?"

Flashbacks: Flashbacks are a noir fixture and Curtiz and the screenwriters structure most of the film by having Mildred recount the story of her life to a police inspector (Moroni Olsen). Note: Ranald MacDougall got the official credit for adapting James M. Cain's novel, but several other writers, including William Faulkner, worked on the screenplay.

Lighting: Haller, who won an Oscar for his groundbreaking Technicolor work in Gone With the Wind (1939), puts on a lighting masterclass in Mildred Pierce. Curtiz and Haller not only use lighting to set the mood, they also use lighting to help advance the plot. The film opens in shadows and fog, and, while being interrogated at the police station, there are always shadows over Crawford's face to emphasize the suspicions surrounding her involvement in her husband's murder. Once the story moves into flashbacks, the lighting abruptly changes. Now, the audience is taken to sunny suburbia where Mildred is bathed in glorious light while puttering around the kitchen baking pies. Haller then gradually shifts to more shadows and more night scenes until we reach what is literally Mildred's darkest hour. She is  shrouded in darkness while watching Veda and her husband in a secret embrace (clip below).

Sets: Many critics have noted Mildred Pierce's similarity to the German Expressionism films of the 1920s and 1930s. This is especially true of the scenes at the beach house, which Curtiz shoots as all angles, twisting staircases, and shadowy corners. This is quite reminiscent of two films: The silent German film, The Cabinet of Dr. Caligari (1920) directed by Robert Wiene and Edgar G. Ulmer's bizarre horror film, The Black Cat (1934).

Mildred and Veda: Complex mother-daughter relationships were nothing new in women's pictures -- think Stella Dallas (Barbara Stanwyck) sacrificing everything for her beloved daughter (Anne Shirley) or Charlotte Vale's (Bette Davis) poisonous relationship with her domineering mother (Gladys Cooper) in Now, Voyager (1942) -- but family relationships were never a hallmark of films noir. Mildred and Veda echo the many dysfunctional duos in other noirs: Sam Spade (Humphrey Bogart) and Brigid O'Shaughnessy (Mary Astor) in The Maltese Falcon (1941) or even Holly Martins (Joseph Cotten) and Harry Lime (Orson Welles) in The Third Man (1949). In many ways, Mildred fulfills the world-weary hero archetype while Veda is the manipulative, wily femme fatale. In fact, femme fatale is actually one of the nicest things you can say about Veda, who is one of the purest psychopaths in old Hollywood movies. (To learn more about Blyth's dynamite performance as Veda and her life and career, check out Jacqueline T. Lynch's new biography, Ann Blyth: Actress. Singer. Star.)

Mildred Pierce is also available on DVD and Video on Demand.