Christopher Lee: A Life in Film 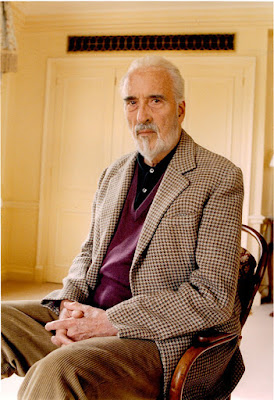 Today, I'm celebrating the life and films of horror icon Christopher Lee who passed away June 7 in London at age 93. Here he is in a lovely portrait by filmmaker Devlin Crow.


No one ever played bad quite as good as Christopher Lee. The British actor thrilled and terrified audiences for more than five decades, playing screen villains like Dracula, Fu Manchu, and the wily wizard Saruman. However, Lee was much more than the stylish bloodsuckers he so often portrayed. Lee was a Renaissance man who was an intelligence officer, devoted husband and father, and opera/heavy metal singer during his long, rich life.

Christopher Frank Carandini Lee was born May 27, 1922, in the exclusive London enclave of Belgravia. His father, Lt. Col. Geoffrey Trollope Lee, was a distinguished army officer and his mother, Contessa Estelle Marie Carandini, was from an aristocratic Italian family. Lee's parents divorced when he was 6, but he still grew up with all the privileges of upper-class life. In later life, Lee always liked to joke that he and Dracula had quite a bit in common because they were both embarrassments to a distinguished family. Lee's family mixed with nobility, including many expatriate Russian aristocrats who fled their homeland after the Bolshevik revolution (ironically, he would later play Rasputin), and he attended the exclusive boy's school, Wellington College. In his autobiography, Lord of Misrule, he could only recall travelling second class once during his childhood, but, as he dryly noted, "That must have been a booking error."

Lee drifted a bit after graduating from Wellington, but he volunteered for the Royal Air Force at the start of World War II. Lee was unable to fly because of a damaged optic nerve that caused him headaches and dizziness, but he used his considerable linguistic skills (Lee spoke six languages) as an intelligence officer in North Africa and Italy. Lee did work with a special unit investigating war crimes, and he often hinted about his role in covert operations that are still classified by the British government. When Lee was asked about his Special Forces career, he would often reply with the query, "Can you keep a secret?" When the eager questioner replied in the affirmative, Lee would put on an enigmatic smile and say, "And so can I."

Lee was once again adrift after he left the RAF. He stumbled into acting with the help of an uncle, but, at first, his  6-feet-5-inch frame hindered him from getting good parts. However, what was a detriment in drawing room comedies turned out to be an asset in horror films. When he arrived at Hammer Films to audition for Frankenstein's monster in The Curse of Frankenstein (1957), the producers offered him the part almost as soon as he walked through the door.

The next year, Lee took on Dracula for the first-time in The Horror of Dracula. He would go on to play the character several more times for Hammer films, and his suave, but sinister interpretation of the Count made him one of cinema's iconic vampires right alongside Bela Lugosi and Max Schreck. While at Hammer, Lee also played The Mummy, Rasputin, and Sherlock Holmes often appearing opposite his good friend, Peter Cushing.

By the 1970s, Lee had tired of the Hammer formula. At first, he tried to bring more innovative stories to the studio through the novels of his friend Dennis Wheatley, but production difficulties halted their collaboration after two films, The Devil Rides Out (1967) and To the Devil a Daughter (1976). Instead, Lee began looking for a breakthrough role in another genre. He found it in Billy Wilder's The Private Life of Sherlock Holmes (1970), where he played the great detective's brilliant older brother, Mycroft.

Eventually, Lee began to get interesting parts in other genres, including Comte de Rochefort in The Three Musketeers (1973),  and Francisco Scaramanga in the James Bond film, The Man with the Golden Gun (1974). By this time, Lee was married to Danish painter Birgit Kroencke.  The couple had a young daughter, Christina, so he moved to Hollywood for more lucrative opportunities. Lee appeared in a wide variety of interesting roles including his personal favorite, a biopic about the founder of Pakistan, Muhammad Ali Jinnah.

Lee, who had an imposing bass singing voice, launched a music career in the 1990s. He recorded a wide variety of songs including operatic arias, show tunes, and even three Christmas albums. Lee was one of the pioneers of the symphonic metal genre, and he received a Spirit of Metal award for his 2010 album Charlemagne: By the Sword and the Cross. Here he is performing a metal version of My Way (trust me when I say it's unlike anything you've ever heard before).

Lee experienced a career renaissance in the 2000s when many of the directors who grew up watching Hammer horror films cast him in their movies. Lee appeared as villainous Count Dooku in two of the Star Wars prequels. A lifelong Tolkien fan, he fulfilled a personal dream by playing the wizard Saruman in The Lord of the Rings trilogy. He was also a great favorite of director Tim Burton, appearing in six of his films.

Lee continued working right up to the end of his life. He passed away from respiratory problems and congestive heart failure on June 7.