Beyond Sunset Boulevard: The Hollywood Noirs of the 1950s 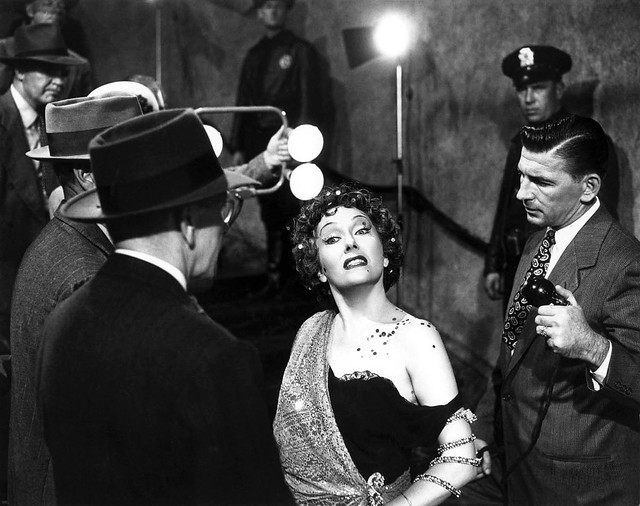 Today, I'm looking at four films from the early 1950s that changed perceptions of the Hollywood studio system. One of the films is Sunset Boulevard (1950), starring Gloria Swanson (above) as delusional silent film star Norma Desmond.

This article is part of the Classic Movie History Project Blogathon hosted by Movies Silently, Silver Screenings, and Once Upon a Screen. Go here for more articles about old Hollywood's golden age.


It was a late summer evening in Hollywood in 1950, and Louis B. Mayer was fuming. The MGM chief was known for his bouts of rage -- he reportedly slapped Mickey Rooney several times and he regularly shouted at staff -- but this time his anger wasn't directed at some unfortunate underling. Mayer had just attended a private screening of director Billy Wilder's new film, Sunset Boulevard. While most of the old Hollywood elite were impressed by the picture -- the audience burst into applause after the final fade-out, and Barbara Stanwyck reportedly knelt down to kiss the hem of Sunset star Gloria Swanson's silver lame gown -- Mayer felt the movie was a betrayal of all the values that he held dear.


Mayer, who  built MGM up from a small talent booking agency to old Hollywood's premier studio,  didn't like his beloved dream factory to be besmirched in any way. He shrieked obscenities at Wilder and told him, "You have disgraced the industry that made and fed you," before storming out of the theater.

In reality, Mayer's anger was about much more than Sunset Boulevard. By 1950, both America and Hollywood were rapidly changing (Mayer would be ousted as MGM chief one year after Sunset Boulevard premiered). A darker style of film making, known as film noir, had become wildly popular, and these films with their worldly, cynical attitudes were replacing the gung-ho patriotism and wholesome values that embodied the studio's output during Mayer's heyday. The staples of the noir style were private detective films like The Maltese Falcon (1941) and The Big Sleep (1946), but Hollywood, with its larger-than-life characters and dark secrets, provided plenty of opportunities for writers and directors who wanted to reveal the nightmares behind the dream factories.


The early 1950s were the heyday of Hollywood expose movies. There were films in many different genres, including musicals (Singin' in the Rain, A Star is Born). Today, I'm going to look at four films noir that were made between 1950 and 1952.

Our first Hollywood noir is director Nicholas Ray's In a Lonely Place (1950). This is the purest noir in the bunch: A dark tale of love and obsession that takes place in and around Beverly Hills. Screenwriter Dixon Steele (Humphrey Bogart) used to be a big name in Tinseltown, but his career declined because of his alcohol-fueled rages. Steele's long suffering agent (Art Smith) finally gets him a contract for a new screenplay, but Steele's good luck is threatened by a bizarre murder (he's the prime suspect), and by his obsessive relationship with an out-of-work actress (Gloria Grahame).

In a Lonely Place doesn't deal with the inner workings of the studio system. Instead, the movie focuses on the type of personality that is drawn to a career in Hollywood. In a Lonely Place tells the audience that if you're a normal, well-adjusted citizen then you can have a successful career as a police officer or doctor, but, if you're an emotionally unstable rage-aholic, then Hollywood is the only place for you. Steele punches almost every character in the movie at least once, but his agent just blames it on his "artistic temperament." Steele's best friend (Frank Lovejoy) even laughs off Steele's creepy re-enactment of a murder at a dinner party, putting it down to his "imagination." He nonchalantly informs his wife (Jeff Donnell) that Steele behaves in this bizarre fashion because it helps him write better screenplays.

The Hollywood noirs coincided with the rise of the tabloid press. The fan magazines were still willing to play along with the wholesome image Hollywood studios wanted to create, but scandal magazines like Confidential eagerly reported on the private lives of Hollywood stars (Ironically, before Bogart settled down with Lauren Bacall, he was a tabloid staple for his booze-filled brawls with third wife, Mayo Methot). Journalist Henry E. Scott, who wrote a book about the fifties tabloids, said in an interview with NPR that the tabloids helped break down the rigid moral code upheld by Hollywood's studio system and also led to open season on celebrities' private lives. "They were very rigid, unrealistic codes that movies projected," he said. "So (magazines like Confidential) helped show the real image of America."

The tabloid press is a large presence in Sunset Boulevard, which premiered three months after In a Lonely Place. The movie's memorable opening scene shows eager reporters and photographers gathered around the pool of an old Hollywood mansion to watch poor Joe Gillis (William Holden) get fished out of the drink.

Unlike the tabloids, Wilder's dark satire doesn't focus on Hollywood players at the peak of their power and popularity. Instead, the movie deals with those that Tinseltown left behind -- the "waxworks" as Gillis cruelly puts it -- like director-turned-valet Max von Mayerling (Erich von Stroheim) and Norma Desmond (Gloria Swanson), a once great silent movie star who shuts herself up in her decaying mansion with the fading remnants of her career.

The origins of Sunset Boulevard lie in Wilder's fascination with silent films. He used to go to the cinema regularly as a young man living in Berlin, and, when he came to Hollywood as a screenwriter, he often walked past the mansions of the former silent stars, often wondering what their lives were like "now that the parade passed them by."

Sunset Boulevard is drenched in old Hollywood history. Joe and Norma watch Swanson's old films in her home movie theater, and the framed photos spread throughout Norma's mansion are from Swanson's own collection. And, of course, there are "the waxworks." Norma's bridge partners are silent stars Anna Q. Nilsson, H.B. Warner (Warner actually had a respectable sound career), and the great director and comedian Buster Keaton. Von Stroheim and Keaton are two of cinema's great auteurs, and it's always a painful lesson in the harsh realities of Hollywood to watch the sad faces of these discarded geniuses.


Sunset Boulevard was a huge hit. Soon every studio in town was pumping out an inside Hollywood picture.  Even MGM got into the act with director Vincente Minnelli's The Bad and the Beautiful, a stylish noir that has the MGM hallmarks of luxe production values and big name stars. The Bad and the Beautiful depicts the rise and fall of all-powerful producer Jonathan Shields, played with manic energy by Kirk Douglas. Shields, who is the type of personality who casts extras at his own father's funeral, steamrolls over everyone in his quest to make the perfect picture. He dumps his former partner (Barry Sullivan) without batting an eye, insults the love of his life (Lana Turner) by telling her, "I don't need a wife. I need a star," and he encourages the wife (Gloria Grahame) of his top screenwriter (Dick Powell) to have an affair so she won't distract her husband.

The Bad and the Beautiful is a noir in style -- there's low-key lighting and even a Dutch tilt or two -- but at its heart, the movie is another "Hooray for Hollywood" picture. Shields may be a world-class jerk, but he's certainly not a member of the waxworks club; instead, he's an all-powerful producer at the top of his game, who has a trophy case full of Academy Awards. The movie even features a wise studio head (Walter Pidgeon) who gives heart-warming lectures in his spacious office. Minnelli infuses The Bad and the Beautiful with the joy of cinema, especially in this scene where Shields devises the perfect cinematic technique to make a low-budget horror movie.


Another 1952 film, The Star, is certainly no love letter to old Hollywood. This extremely low budget film features Bette Davis as a washed-up Oscar-winning actress, Margaret Elliot, who is so broke that she gets kicked out of her modest apartment and ends up living with a young mechanic (Sterling Hayden). The mechanic, who used to be an actor himself, and Margaret's young daughter (Natalie Wood) try to convince Margaret to give up on the idea of stardom, but the stubborn actress persists even when she is met with humiliation after humiliation.

Even though Davis is dressed in frumpy costumes and working on cheap sets, she gives a lacerating performance as a woman whose life is falling apart. At least Norma Desmond had the cushion of her money and her mansion; after The Star's first 30 minutes, Margaret only has her beloved Oscar and one very wrinkled dress. The highlight of the film is Margaret's drunken car ride through Hollywood. She sets her precious Oscar on the dashboard and careens through the streets while ranting against starlet Barbara Lawrence. Ironically, Lawrence's career quickly fizzled out, while Davis is still one of old Hollywood's greatest legends. Sometimes, even in Hollywood, real talent prevails.

My sources for this article are On Sunset Boulevard: The Life and Times of Billy Wilder by Ed Sikov, Conversations with Wilder by Cameron Crowe, and Shocking True Story: The Rise and Fall of Confidential, 'America's Most Scandalous Scandal Magazine' by Henry E. Scott.