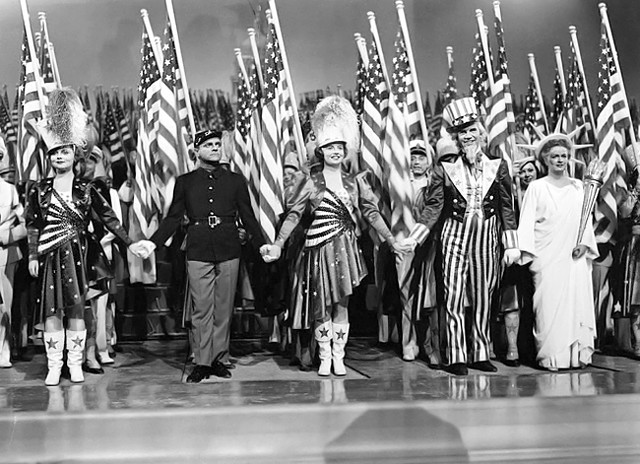 This article is part of the My Favorite Classic Movie Blogathon. Go here for more favorite films from the best classic movie bloggers in the business.

The classic musical Yankee Doodle Dandy (1942) is one of the most joyous films ever made, featuring rousing songs, crisp direction by Michael Curtiz, and an electrifying performance by James Cagney. There are three reasons I return again and again to Yankee Doodle Dandy, but, first, here's a little background.

Yankee Doodle Dandy is the life story of Broadway showman George M. Cohan, who wrote standards like "Over There," "Mary's a Grand Old Name," and "Give My Regards to Broadway." The film begins at Cohan's birth -- on the Fourth of July, of course -- and follows him through his early days as a child performer  to his later years as a national sensation.

Cohan was still a household name in the 1940s, so it was natural that Hollywood would want to bring his story to the big screen. However, Cohan, who owned the rights to his life story, wanted complete control over the project, which caused both MGM and independent producer Samuel Goldwyn to walk away from planned Cohan biopics. By the time Warner Brothers acquired Yankee Doodle Dandy for Cagney, Cohan was in poor health. His input on the film was limited, although the producers did cut out some personal details in deference to Cohan. His first marriage to actress Ethel Levey was eliminated, and none of his four children were mentioned.

Yankee Doodle Dandy was a blockbuster when it premiered on June 6, 1942. The nation had plunged into World War II just seven months earlier, and Americans badly needed a patriotic film that would lift their spirits and unify the nation for the tough times ahead. It was Warner's biggest box office hit to date, nominated for seven Academy Awards, including Best Picture. Yankee Doodle Dandy won three awards on Oscar night with Cagney receiving a much-deserved Best Actor trophy (the other two awards were for best sound recording and best musical scoring).

Cagney: Cagney's electrifying performance is the main reason to see Yankee Doodle Dandy. By 1942, Cagney had been a top star at Warner Brothers for more than a decade, but he was often pigeonholed in the gangster roles that made his name. Cagney, who got his start in vaudeville, fancied himself a song-and-dance man, and he often battled the studio over the types of roles he was assigned.

Cagney seems like the obvious choice for Yankee Doodle Dandy -- both Cohan and Cagney were brash Irish-Americans who won over audiences with their charisma and energy --  but both Mickey Rooney and Fred Astaire were considered for a Cohan biopic. I actually think Rooney would have been fine, he's a better actor than he sometimes gets credit for, but Astaire was all wrong for the part (Astaire knew this and dropped out of the Goldwyn production).

Once Cagney got the part, he studied Cohan's performances. Cohan had an idiosyncratic dancing style where he strutted back and forth across the stage while performing acrobatic leaps.  Cagney nails the Cohan style as you can see by comparing the two men. The first clip shows Cohan dancing in a 1932 film. His routine starts at the 2:30 mark.

If you compare Cohan to Cagney performing "Yankee Doodle Boy," they're almost identical, except Cagney is actually a much better dancer (clip  below). Influential film critic Bosley Crowther raved about Cagney's performance in his The New York Times review. Crowther noted how well Cagney captured Cohan's mannerisms such as jabbing one finger in the air and half-talking, half-singing his numbers. Crowther wrote, "The Yankee Doodle Boy (Cohan) from way back when is quite as familiar a figure as the American theater has produced, and quite a unique character, so far as style and mannerisms are concerned. Yet, Mr. Cagney stepped up and took on the difficult role in full realization."

Curtiz: Michael Curtiz is the least known of the great old Hollywood directors, but he made several classics, including Casablanca (1943), The Adventures of Robin Hood (1938), and Mildred Pierce (1945). Curtiz always considered Yankee Doodle Dandy his favorite of his own films, and, even with Cagney in the starring role, Yankee Doodle Dandy needed a director with sure instincts. Curtiz keeps Yankee Doodle Dandy moving at a fast clip, using several montages to show the passage of time. Curtiz is also quite good at staging the musical numbers. "You're a Grand Old Flag" is probably the most spectacular number in the film (clip below):

Yankee Doodle Dandy is not an integrated musical, meaning that the characters do not  sing and dance in everyday life. Instead, Yankee Doodle Dandy's songs are all stage numbers, which presented Curtiz with quite a challenge. He had to present the numbers as if they were being performed on Broadway, but he also had to make them visually interesting for movie audiences. Curtiz achieves this through several methods. Sometimes he uses several camera angles, as you can see from "Yankee Doodle Boy" where Curtiz shows Cagney performing the song from several spots in the theater, including the balcony. Curtiz also sometimes introduces the songs in more intimate settings, like having Cagney and Joan Leslie sing "Mary's a Grand Old Name" with just the two of them at a piano (clip below).

S.Z. Sakall: There are quite a few good supporting performances in Yankee Doodle Dandy. Walter Huston, a veteran stage trooper himself, gives a touching performance as Cohan's gentle father, Jerry. The  underrated Joan Leslie, who was 17 at the time, is wonderful as Cohan's wife, convincingly aging from a teenage girl to a grey-haired woman. However, all of us have our cinematic weaknesses, and mine comes in the cuddly physique of character actor S.Z. Sakall. The Hungarian Sakall was beloved by forties audiences for his portly frame, fractured English, and excitable demeanor. He only has a small part in Yankee Doodle Dandy, but it's a memorable one. He plays a befuddled theatrical producer who is fond of shows featuring "the womens."  Cohan and his partner, Sam Harris (Richard Whorf) fast talk the confused Sakall into producing a play that he calls, "Yankee Doodle Candy."

Yankee Doodle Dandy is available on DVD and video on demand.