TCM Essentials: To Kill a Mockingbird 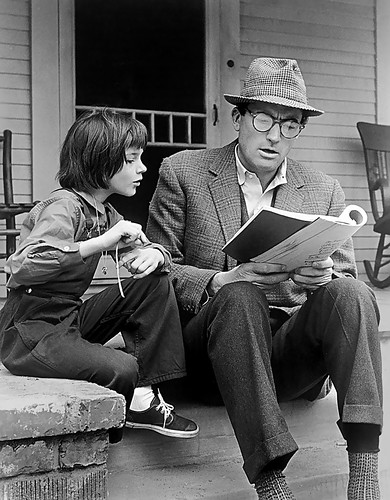 TCM will air To Kill a Mockingbird (1962) at 8 p.m. (May 30) as part of its Essentials series. Here's Mary Badham  and Gregory Peck rehearsing their lines on the set. After the jump, I'll detail five things to look for when watching this classic coming of age story.


To Kill a Mockingbird holds a central place in American culture. Harper Lee's classic novel is required reading for most schoolchildren and many teachers also show the 1962 film version, which is quite faithful to the book. If you haven't seen To Kill a Mockingbird since your schooldays, now is a great time to revisit the movie. Lee's much-anticipated second novel Go Set a Watchman, which tells the story of an adult Scout Finch, will be published July 14. Even without the new book, To Kill a Mockingbird is a compelling film that deals with the joys and struggles of growing up and America's ongoing struggle for equality.

To Kill a Mockingbird tells the story of 6-year-old tomboy Scout Finch (Mary Badham) who is growing up in the small town of Maycomb, Ala., with her older brother Jem (Philip Alford) and her widowed father, Atticus (Gregory Peck). The siblings have a carefree childhood, playing outside all day and making up stories about the local recluse Boo Radley (Robert Duvall), until Atticus, who is a well-respected lawyer, takes on the case of an innocent black man (Brock Peters) who is being framed for the rape of a young woman (Collin Wilcox) from a poor white family.


Producer Alan J. Pakula, director Robert Mulligan, and screenwriter Horton Foote collaborated to make a sensitive portrait of both small-town Southern life and the many memorable characters that Scout encounters. Here's five things to look for while watching To Kill a Mockingbird:

Southern atmosphere: Lee based Maycomb on her real hometown of Monroe, Ala., and although To Kill a Mockingbird was filmed in Hollywood on a Universal Studios back lot, the film has the look and feel of a sleepy hamlet in the deep South. Art director Henry Bumstead brought real houses on the set to create the side street where the Finches live, and the courthouse set was a meticulous recreation of the real courtroom where Lee's father, Asa, often practiced law.

Badham and Alford: There were many great child stars in old Hollywood, but Badham and Alford give two of the best juvenile performances in American films. They were both regular kids living in Birmingham, Ala., when they tried out for To Kill a Mockingbird (Pakula conducted a nationwide talent search to find the perfect Scout and Jem). The fact that they weren't professional actors helps give their performances an intuitive quality that  isn't often found in child performers, who sometimes behave like miniature adults.

Peck: Gregory Peck is one of old Hollywood's greatest leading men, but his performance as noble Atticus Finch in To Kill a Mockingbird made him an American icon.  Atticus is actually a tricky character -- he's a paragon of virtue and it is difficult to make traits like honesty and self-control interesting onscreen, but Peck gives a beautifully restrained performance that earned him an Academy Award for Best Actor. Peck also gets extra kudos for being one of the few non-Southern actors to convincingly pull-off a Southern accent.

Truman Capote: Capote was one of the great writers and one of the great celebrities of the 20th century. Films about him have practically become a cottage industry, although there's no more compelling portrait of Capote than John Megna's performance in To Kill a Mockingbird. He plays Dill, Scout's neighbor and best friend, who is based on Lee's childhood friendship with Capote, who used to spend his summers in Monroe. Megna and the filmmakers capture Capote's essence right down to his flair for fashion (how many grade-school children wear seersucker suits) to his love of the macabre (Dill is the origin of most of the scary stories about Boo Radley).

Duvall's debut: Robert Duvall was a struggling young actor when he won the pivotal role of neighborhood recluse Boo Radley. Duvall only has a few minutes of screen time, but he makes the most of it in a silent performance that is quite touching.

If you missed TCM's airing of To Kill a Mockingbird, you can catch it on DVD or video on demand.