The Essential Films of 1939: Wuthering Heights 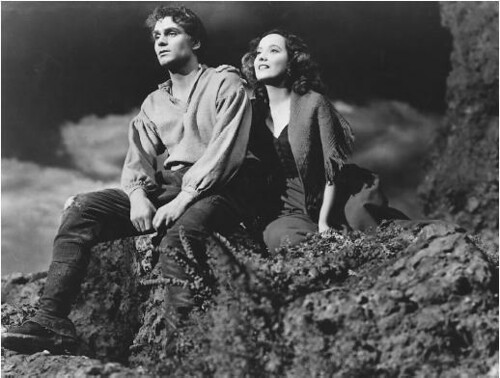 The Plot: A traveler (Miles Mander) gets caught in a snowstorm on the lonely Yorkshire moors. He stumbles onto a farmhouse, Wuthering Heights, where he meets its forbidding owner, Heathcliff (Olivier).  The traveler spends a restless night at Wuthering Heights, where he sees  the ghost of a young woman. Later the traveler hears the story of Heathcliff's doomed love affair with Cathy Earnshaw (Oberon) from a housekeeper (Flora Robson).

Backstory: Screenwriters Charles MacArthur and Ben Hecht wrote an adaptation of Emily Bronte's classic novel in 1936. Producer Walter Wanger bought the rights with the intention of making a film starring Charles Boyer and Sylvia Sidney. That project fell through and Wanger shopped the script to every studio in Hollywood.  Bette Davis lobbied Warner Brothers to buy the script and MGM almost picked it up, but in the end independent producer Samuel Goldwyn made Wuthering Heights.  Director William Wyler was very keen to direct the film, but he had a difficult time convincing the Polish born Goldwyn, who always referred to the film as "Withering" Heights in his fractured English. Goldwyn was quite skeptical about the film  because he didn't like movies where "people die in the end." Wyler eventually convinced Goldwyn to buy Wuthering Heights as a vehicle for his new star, Merle Oberon.

Best Performance: Laurence Olivier as Heathcliff. Flora Robson as Ellen the housekeeper certainly deserves an honorable mention, but Olivier probably gives his best screen performance as the Gypsy orphan who vows revenge on all those who have scorned him. Olivier had a difficult time making the film. He wanted his great love Vivien Leigh to be his co-star, and his extensive stage experience sometimes caused him to overact. Olivier frequently clashed with Oberon and Wyler, but he later credited his experiences on Wuthering Heights with teaching him how to act on screen.

On-set tension: The set of Wuthering Heights was filled with tension. There were many behind the scenes shouting matches, according to both Olivier and Niven, who wrote about their experiences in their respective autobiographies. Oberon and Olivier couldn't stand each other, and during one particularly intense love scene Olivier accidentally spit on her. She complained to Wyler, which caused a shouting match between the co-stars. Olivier reportedly screamed at Oberon, "What's a little spit between actors?"

Location shooting: Wuthering Heights was filmed in Southern California's Conejo Valley, and Goldwyn went to great lengths to recreate the Yorkshire moors on the rolling hills and pastures where they made the movie. Goldwyn sent a film crew to England to bring back 1,000 heather plants. The crew then stripped 500 acres of vegetation and placed the real heather with 15,000 tumbleweeds that were spray painted purple.

Fun Fact: Niven had some trouble crying for a particular scene, so Wyler gave him a menthol mist substance that was supposed to help him work up some tears. Niven had an allergic reaction to the substance, and instead of tears, a green goo came out of his nose.

Why it's essential: Wuthering Heights is one of the greatest of old Hollywood's romantic films and it is probably the best adaptation of Bronte's classic novel. All four leads give superb performances, especially Niven and Olivier, and the on-set bickering probably helped the actors play a story filled with passion and betrayal. The single best element in Wuthering Heights is Toland's cinematography. Wuthering Heights is a dark story and it actually benefits from being filmed in black and white; even so Toland puts on a masterclass of lighting techniques, especially in the thunderstorm sequence.

Availability: Wuthering Heights is available on DVD and video on demand.

The essentials will be off next week. Instead, we'll be participating in the Classic Movie Blog Association's Spring Blogathon with a feature on Maytime (1937), starring Jeanette MacDonald and Nelson Eddy.