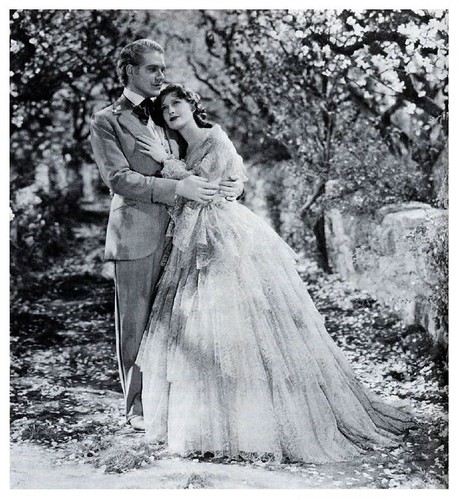 Here's my entry in the Classic Movie Blog Association's spring blogathon, The Fabulous Films of the 30s. My article is about the classic musical Maytime, starring Nelson Eddy and Jeanette MacDonald.


Jeanette MacDonald and Nelson Eddy were superstars in the 1930s. Their legions of fans flocked to movie houses to see the screen duo warble classics like “Ah! Sweet Mystery of Life” and to sigh over Eddy’s wholesome good looks and MacDonald’s elaborate costumes.

MacDonald and Eddy made eight highly successful films together between 1935 and 1942. Eddy and MacDonald still have many devoted fans, but they aren’t as widely remembered or appreciated today as other thirties musical teams like Fred Astaire and Ginger Rogers. This is partly because the duo’s films were operettas, a style of musical theater that you don’t hear of much these days (If you’re not familiar with operetta: When it’s good, it’s The Wizard of Oz. When it’s bad, it’s the songs you endure in Marx Brothers movies while waiting for Groucho to make another wisecrack). Also, although MacDonald and Eddy were both spectacular singers, they were often saddled with schmaltzy storylines that didn’t suit either one of their talents. Eddy was only really ever a competent actor and MacDonald was best in light comedies, like the series of films she made with Maurice Chevalier in the early 1930s (A Person in the Dark will have a review of one of MacDonald and Chevalier's best films, Love Me Tonight (1932) on April 29). Still, their films are entertaining and charming. Who can resist the “Indian Love Call” from Rose Marie (1936) or Eddy belting out “Stout-Hearted Men” in New Moon (1940).


MacDonald and Eddy made one film that deserves to be remembered as a classic. Maytime (1937) was the duo’s third film and while there’s plenty of schmaltz, the film is also a compelling melodrama that director Robert Z. Leonard handles with elegant understatement. Maytime benefits from a stellar supporting turn by the great John Barrymore, but MacDonald  also gives a nuanced performance in a part where she has to age from a teenage girl to an elderly woman.


Maytime tells the life story of soprano Marcia Mornay (MacDonald) in a series of flashbacks. Mornay is a promising young singer at the Paris Opera when she comes under the control of theatrical impresario Nikolai Nazaroff (Barrymore), who begins to take over every aspect of the Mornay’s life. Soon Mornay is an acclaimed singer and Nazaroff proposes marriage, but Mornay balks when she falls in love with a penniless voice student, Paul Allison (Eddy). The film follows their star-crossed love story as Mornay tries to rid herself of Nazaroff’s almost mesmeric hold over her mind.


MacDonald always said Maytime was her favorite of her own films, and she gave Leonard a great deal of credit for its success. His loose directing style helped both MacDonald and Eddy feel comfortable in their roles, and it shows in their performances. “He didn’t believe in the iron-handed technique,” MacDonald said in an interview quoted on TCM’s website. “Mr. Leonard always kept us pliable and spontaneous.” MacDonald and Eddy actually do seem like they’re having fun together, especially in the scene where they duet to “Carry Me Back to Old Virginny.” They actually sing some of this song in normal voices rather than the bombastic belting that was so popular in thirties operettas. Leonard's light touch especially suited Eddy who seems to be having a great time while singing about Virginia ham and eggs .

Even with Leonard’s deft direction, Maytime probably would have fallen apart without the considerable talents of Barrymore. He gives an understated performance, or at least an understated performance for Barrymore (minimalism wasn’t really his thing), and MacDonald responds beautifully. Mornay is both attracted and repelled by Nazaroff and so is the audience. I clearly remember the first time I saw Maytime as a child (it used to air regularly on the local PBS station). Barrymore terrified me so badly I couldn’t sleep that night. The only other film performance that scared me so much was Margaret Hamilton as the Wicked Witch of the West in The Wizard of Oz.


Maytime is first and foremost a musical and both MacDonald and Eddy get their own showstopping numbers. Eddy’s character is introduced while he is singing a humorous pastiche number that takes snatches from The Barber of Seville, Rigoletto, and the William Tell Overture. MacDonald had many spectacular moments while portraying an international opera star. She expertly sings arias from La Traviata, Norma, and Lucia di Lammermoor throughout the film. However, the highlight for many MacDonald and Eddy fans is the beautiful love song, “Will You Remember?” It is probably their best on screen moment, especially when it is repeated in the sentimental climax of the film.

Maytime is based on a 1912 operetta by Sigmund Romberg, although the only things left from the original are the title and “Will You Remember ?” MGM Producer Irving Thalberg purchased the rights for Grace Moore, then MGM’s leading operetta star, but when Moore decamped to Columbia he transferred the production to MacDonald and Eddy, who already had two smash hits under their belt. Thalberg planned a lavish Technicolor production, and filming actually began in August 1936, but that production was scrapped when Thalberg died in September.


Filming re-started on Oct. 29, but by that time Maytime was a much different movie. The expensive Technicolor cameras were replaced by more cost effective black and white, and much of the supporting cast were unavailable because they had moved to other projects.  The original script was thrown out in favor of a new version that screenwriter Noel Langley wrote in just three days. This is probably just as well because the stage version of Maytime was about a girl who falls in love with a gardener, which isn’t as ripe with dramatic possibilities as an international opera singer who is controlled by her Svengali-like manager. In fact, Langley may have borrowed large chunks of the plot, including the flashback format, from Noel Coward’s 1929 operetta, Bitter Sweet, which concerns a brilliant singer who carries a decades long torch for a penniless music teacher. Ironically, MacDonald and Eddy would film Bitter Sweet in 1940, although it wasn’t one of their more successful films.

Maytime was another huge hit for MacDonald and Eddy, and they went on to appear in five more films until Eddy left MGM for Universal Pictures in 1942. They continued to perform in concerts together until MacDonald passed away in 1965.

Maytime is available on DVD and video on demand.

Go here, for the other entries in The Fabulous Films of the Thirties.